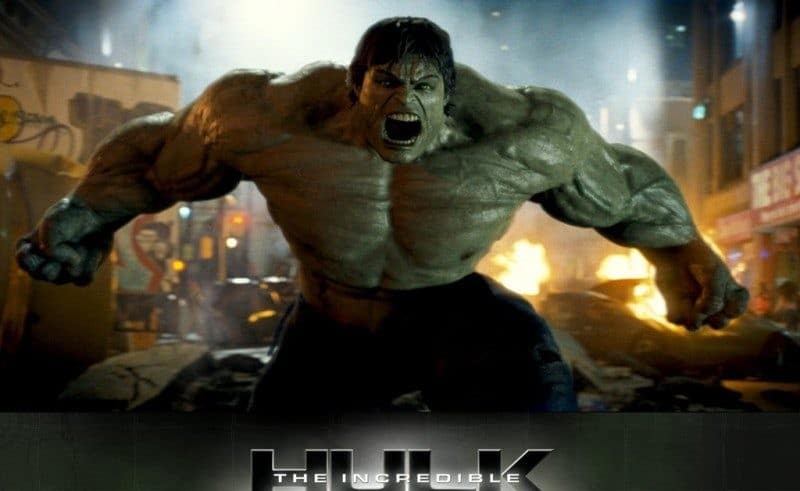 Fast on the heels of 2008’s Iron Man, Marvel released another smashing cinema spectacle: The Incredible Hulk!  This movie continued Marvel’s series and introduced us to the boundless rage of one of The Avengers most powerful allies!

Don’t make me hungry.  You wouldn’t like me when I’m… hungry?

The Comic Inspiration of The Incredible Hulk

Summary of The Incredible Hulk

Gamma scientist Bruce Banner is used by the military is a series of experiments that he is told are to make humans immune to gamma radiation. Secretly, they’re trying to recreate the process that created Captain America.  Banner hulks out into a giant green menace, destroying the lab, and becoming a fugitive from the military.  He hides out in Brazil, working as a janitor in a soda bottling facility, while he learns to control his anger and bloodrate.  He also gets some martial arts training, which serves its purpose, as he is discovered when a drop of his blood falls into a soda.  When the recipient of this soda ingests the soda, the military hears about the effects, and traces it back to the soda factory. 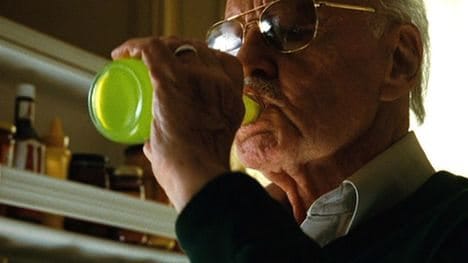 Bruce is discovered, and escapes Emil Blonsky and the rest of General Ross’s team only because the Hulk takes over.  Blonsky, craving another chance at the Hulk, agrees to some Super Soldier experiments in an attempt to gain an edge.

Banner meets Betty Ross at Culver University, and she does what she can to help him.  Unfortunately, her boyfriend, Leonard Samson, informs the military where Bruce is, and another Hulk showdown ensues.  Blonsky tries to take the Hulk one-on-one, and fails miserably, breaking nearly every bone in his body in the attempt.  The Hulk and Betty escape to New York City, where Bruce needs to meet with Mr. Blue, a scientist who Banner has been communicating with in an attempt to find a cure for his condition.  The scientist turns out to be Samuel Sterns.

Sterns cures Banner of his Hulk side, but not before a fully healed Blonsky and the rest of Ross’s team manage to arrest Betty and Banner.  Blonsky, mad for power, forces Sterns to use his supply of Hulkblood to give him even more power.  Sterns reluctantly complies, transforming Blonsky into the Abomination, who begins to wreak havoc in Harlem.  In the carnage, Sterns gets his own accidental dose of Hulkblood straight to his brain, teasing a future appearance from The Leader.  As the Abomination continues to destroy NYC, General Ross gives Banner the go-ahead to try to summon the Hulk to save the day.  Sure enough, a massive battle begins, and the Hulk ultimately comes out on top.

The Hulk escapes NYC and we find that Bruce Banner has set up in British Columbia, learning how to control his anger and transformations.

A post-credits scene shows Tony Stark approaching General Ross in a bar, telling him that a team is being put together.

The best part of this movie is the climactic battle between Hulk and the Abomination.  From taxicab boxing gloves to Hulk’s supersonic clap, a ton of awesome moments occur, squeezed into one battle.  The end of the battle also shows just how much Banner cares for Betty, as she is the only one who can convince the Hulk to show any kind of restraint.

Stan Lee shows up in this film as the old man who drinks the Hulk soda.  Though we don’t find out exactly what happens to him, you can rest assured, it took him by surprise!

The post-credits scene in Incredible Hulk is expanded upon in the Marvel One-Shot, “The Consultant,” in which Tony Starks intentions during his meeting with General Ross are explained (or perhaps retconned).

At the time, Incredible Hulk was another in a long list of mediocre superhero movies.  The film didn’t contribute enough to the overall cinematic universe to feel necessary, and even the post-credits scene didn’t tease much that viewers of Iron Man didn’t already know.

Watching it again, it is maybe not one of the better Avengers movies, but it is a huge step up on the 2003 attempt at the same character.  As a superhero movie, it succeeds.  We get a rapid origin story told in the opening credits, skipping over exposition that most superhero movies get tied down in.  There’s plenty of action from the Hulk, and the first time he appears, it’s a little terrifying, showing the Hulk to be the monster that so many people see him as.  With plenty of humor mixed in, The Incredible Hulk was a really fun ride, and Edward Norton was entertaining as the Jekyll to Hulk’s Hyde.

Norton didn’t return to the role for 2011’s The Avengers, but his performance in this first film wasn’t bad.  For many, Ruffalo is iconic as Hulk, but Norton took the character and made the relationship with Betty one of the best romances in the Avengers series.  You really want the two characters to be together as they reunite in their old college town.

Despite having Edward Norton, Liv Tyler, William Hurt, and Tim Roth, this movie didn’t perform very well in the box office, and has gone down as one of the more forgettable chapters in the Avengers saga.  It’s true that this movie is no Avengers- but only because it is lacking in the crossover spectacle.  Even Thor got to have Hawkeye and Coulson make an appearance, and Iron Man 2 was made to introduce S.H.I.E.L.D. to the viewers.  Incredible Hulk gets no ties to the other Avengers movies, and that’s the only place it really lets down.  Fortunately, with The Abomination still being alive, Doc Samson being introduced, and the transformation of The Leader, there are plenty of opportunities for Marvel to make this movie a fitting exposition for a later chapter in the Avengers.  The Abomination was even supposed to be in Age of Ultron, supposedly, so I’m sure it’s only a matter of time before The Leader shows his big green head.

I’ve always been more curious than cautious, and that’s served me pretty well.

While not a favorite of most fans, this might be my personal favorite first solo film in phase one.  Thor felt slow and light on action, Captain America was cheesy and felt like a GI Joe movie, and Iron Man felt like a ton of exposition with very little villain development.  Incredible Hulk skipped the exposition and got us right into a high-tension situation and let you know that Banner was on the edge of hulking out at any time.  For me, this one was heck of a ride, and it never disappoints me.

The biggest effect this has on the rest of the MCU is Bruce getting the Hulk under some level of control.  By the time of the Avengers, he is “always angry” and able to trigger the Hulk at will.  His meditation and breath control exercises in this movie must have paid off.  There’s also the teases about The Leader and Doc Samson.

Other than this, we get to see Tony Stark tell Ross about the team.  At the time, this was the 2nd movie in the series.  Much of the movie takes place concurrently and after the events of Iron Man 2, and so the team Tony Stark was talking about was assumed to be the Avengers.  I, for one, was expecting an Incredible Hulk 2 (or a portion of the Avengers) to focus on hunting down the Hulk to recruit for the Avengers.  However, in the Marvel One-shot, “The Consultant,” we discover that Tony Stark, demoted from member of the Avengers to consultant during Iron Man 2, was sent not to recruit Ross to help get Hulk, but the Abomination.  Coulson and Fury chose Stark for this job, knowing that he’d annoy the General, and the Abomination, who couldn’t be tamed or controlled, would remain locked up.

On the whole, Incredible Hulk shows you what you need to understand how Banner got the Hulk under control, but you could probably get away with skipping this one when you’re rewatching the series, and you wouldn’t miss out on too much.

To see what happened before this movie’s release, click here for our Iron Man Revisit!