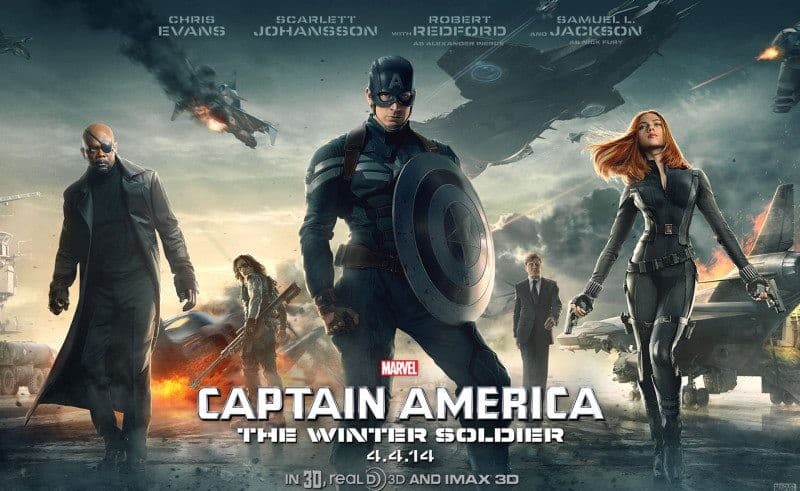 Avengers blew box office records, but was followed by two moderate let-downs in Iron Man 3 and Thor: The Dark World.  This set the stage for a new blockbuster to renew our faith in Marvel, as Captain America: The Winter Soldier redefined the Marvel Universe.

“Well… It looks like you’re giving the orders now, Captain.”

The Comic Inspiration of Captain America: The Winter Soldier

The Winter Soldier is a very recent reintroduction of Bucky Barnes, Cap’s onetime friend and ally in WWII.  In 2005’s Captain America #1, we first saw the character, and the movie is very faithful to the character’s history.  The story of Hydra and SHIELD comes from the pages of Secret Warriors #1.

The movie kicks off with Steve Rogers on one of his early morning runs, where he meets Sam Wilson.  Soon, Black Widow arrives to take Steve on a mission to save some S.H.I.E.L.D. Agents from Batroc the Leaper, who has them held hostage.  When Captain America discovers that Black Widow has another mission, to extract information from the computers onboard the ship that Batroc has taken, he decides to approach Nick Fury.  It is here that he learns of Project Insight, a plan to link three helicarriers via satellite to eliminate chosen threats.

Fury, en route to meet with Maria Hill, is ambushed and attacked by the police force, who it turns out is being led by the Winter Soldier.  The Winter Soldier attempts to kill Fury, but Fury manages to escape by using some nifty S.H.I.E.L.D. tech.  After meeting with Steve and revealing his suspicions that S.H.I.E.L.D. has been infiltrated, Fury is gunned down and dies.

Torn up by Fury’s death, Black Widow and Captain America decide to follow through on the information she’d taken during the mission with Batroc.  He and Widow ultimately find an old WWII bunker, one of the first S.H.I.E.L.D. bases.  It is here they discover that Arnim Zola, one of Red Skull’s scientists, has had his brain uploaded into a computer mainframe, in which he has continued to live.  He reveals that HYDRA has been within S.H.I.E.L.D. this whole time, and that Alexander Pierce, one of the leaders of S.H.I.E.L.D., is a member.  Their intention is to use S.H.I.E.L.D. to exchange security for the world’s freedom.  Before long, S.H.I.E.L.D. shoots a missile to destroy the bunker, but Widow and Cap manage to survive.

Soon, Rogers and Black Widow meet up with Sam Wilson, who is the only remaining person they know who they could possibly trust.  He reveals his wings, which he had used in the military, and joins them in a plan to interrogate Jasper Sitwell, who they’ve determined is a agent of HYDRA.  He reveals that an algorithm was created by Zola to determine anyone who might be a threat to their organization.  When Project Insight is developed, any potential threats will be killed. Sitwell is killed by Winter Soldier, and Rogers pursues him.  Eventually, Maria Hill shows up and helps Rogers escape from a fight that, it turns out, his is outmatched in.

It turns out that Nick Fury was faking his death, and helps to create a plan to stop Project Insight.  This involves Captain America revealing the plot to all agents in the S.H.I.E.L.D. homebase, and Widow attacking Pierce.  Fury forces Pierce to give Widow access to HYDRA information to be made public.  Captain America and Falcon make it onto the helicarriers, where they need to replace the chips that hold the Insight algorithm. During the ensuing chaos, Agent Rumlow, who had attacked Cap earlier, is injured, but manages to survive.  Cap and Winter Soldier face off again, and while Cap is successful in his mission, he leaves Winter Soldier, who he has learned is, in fact, Bucky Barnes, his old best friend, quite confused.  Bucky ultimately saves Rogers’ life, though he doesn’t really understand why.  He visits a museum where he begins to piece together his past.

For me, the scene with Captain America single-handedly taking down an entire ship of soldiers really set the tone for the whole movie.  The action was incredible, intense, and everything that I’d wanted from the first Captain America movie.  It proved to me that Marvel could make a real Captain America movie, and Captain America could kick as much ass as he always was supposed to.  The cameo appearance of Abed from Community was great too. 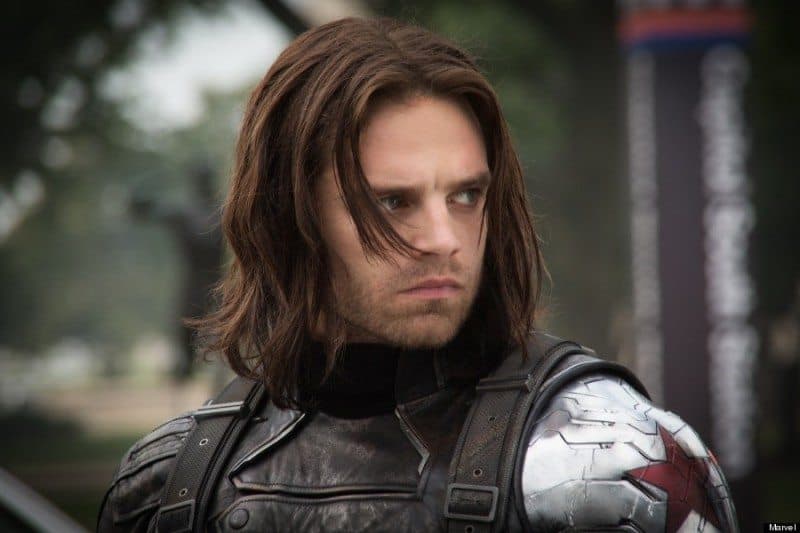 This is one of the less-exciting Stan Lee cameos, but he shows up as a security guard in the Smithsonian Institute, near the Captain America and Howling Commandos exhibit.

The events of Captain America: The Winter Soldier had a direct impact on Agents of S.H.I.E.L.D.  After the events of the movie, AoS shifted directions, with a lot of characters shaken up.  The status of our characters was all mixed up, with some of the major characters now being revealed as double agents.  Agent Grant Ward’s true colors, for example, were finally revealed, and he has been an adversary for Coulson’s team ever since.  It’s anyone’s guess what S.H.I.E.L.D. will look like in Avengers: Age of Ultron because of this movie.

This movie brought back a lot of positive feelings for Marvel.  The action was, again, some of the best, if not the best, of any Marvel movie up to that point.  The plot was full of political thrills, and reflected a distrust in the government that has become somewhat prevalent in this day and age.  With awesome plot twists and some cool new characters, the Russo brothers proved that they could helm an action-heavy superhero movie, but keep it grounded, realistic, and gritty. 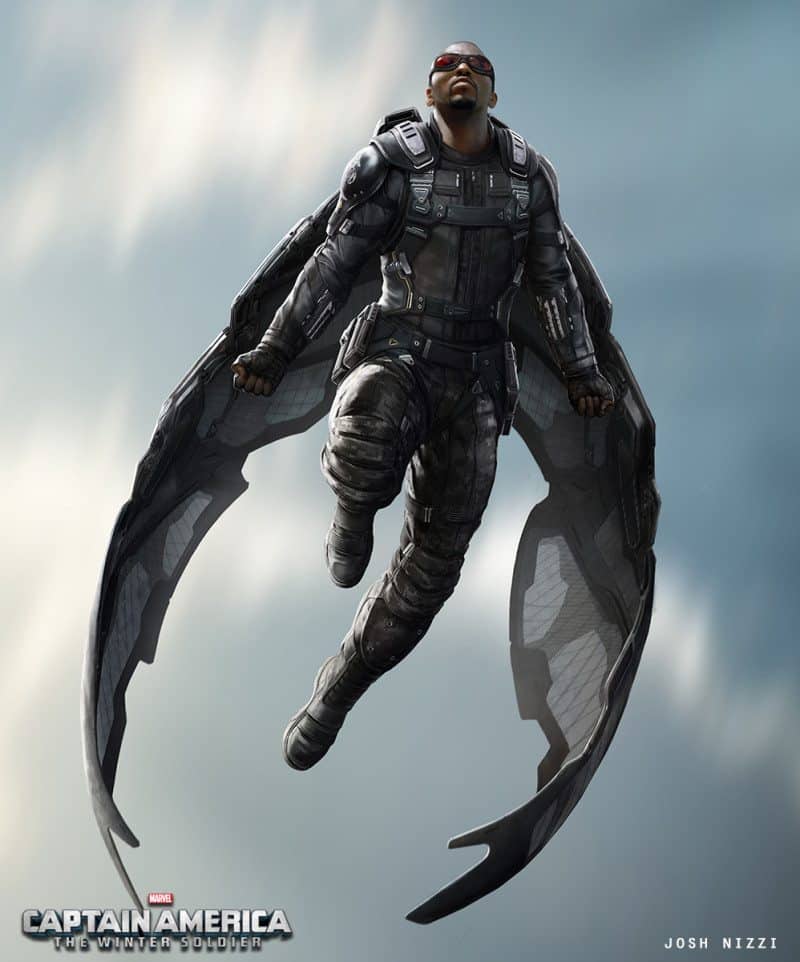 With events that had a heavy impact on the following Marvel films, Captain America had stakes that seemed higher than Iron Man 3 or Thor: The Dark World.  Add to this the awesome appearance of Zola, taking an appearance that was reminiscent of the comics, as well as the addition of Falcon, who will be returning in Avengers: Age of Ultron, as well as Captain America: Civil War, and you’ve got an awesome thrill ride that I would go on again and again.  The post credits scene also had the best teaser of what to expect in upcoming movies… our first sight of Quicksilver and Scarlet Witch!

While this movie didn’t bring us any infinity stones, it did reform the infrastructure of S.H.I.E.L.D. and shook things up quite a bit.  Now that Cap has seen the potential negative consequences of artificial intelligence, I’m sure that Ultron will be the straw that breaks the camel’s back.  He no longer has a shining example from the government.  We also got to see Baron Von Strucker, Quicksilver, Scarlet Witch, and Falcon.  It’s easy to say that this is the best connection between Avengers and Avengers: Age of Ultron.

With new heroes and a great set-up for Avengers: Age of Ultron, you need to watch Captain America: The Winter Soldier before you catch the Avengers’ latest adventure.