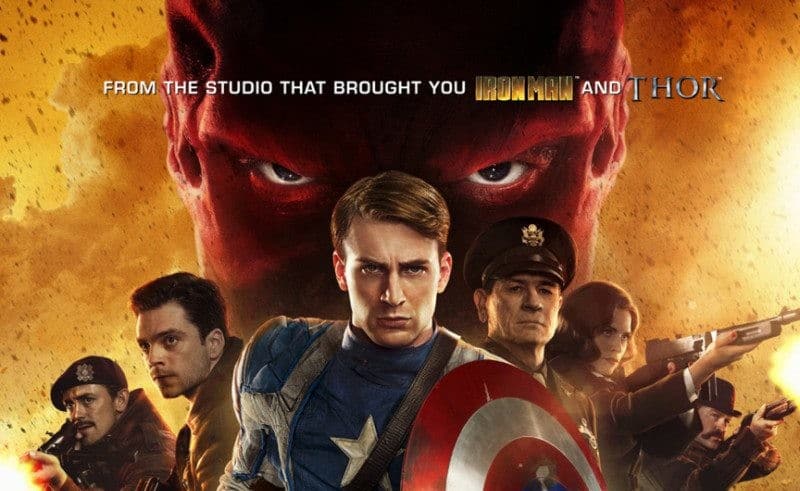 After the electrifying Thor, Marvel introduced us to the last of its phase one superheroes in Captain America: The First Avenger!  While that subtitle may be a bit misleading, one can’t argue that Cap’s origin story sure blasted us back to the past before tying it all together at the end!

I don’t want to kill anyone. I don’t like bullies; I don’t care where they’re from.

The Comic Inspiration of Captain America: The First Avenger

Captain America first appeared in December of 1940, and was depicted punching Adolf Hitler (a scene that occurs quite a few times in the movie).  The plot of the movie very loosely follows some of the early Captain America stories, up to and including his freezing.  One major difference is that Cap spends most of his time and energy fighting The Red Skull, played in the movie by Hugo Weaving, rather than Baron Zemo, who many consider to be Cap’s true adversary.  Red Skull is, of course, a major Captain America villain, having appeared as early as 1941.  Captain America’s revival, occurring in the comics in the 1960’s (and after a number of failed Captain America replacements), has instead been pushed to the modern day, to better suit the MCU.

The movie is framed in the discovery of Steve Rogers’ frozen body, but most of the story takes place back in the 1940’s.

Johann Schmidt, a leading Nazi general, leads his team of soldiers into Tonsberg, Germany, where he believes the tesseract, an object of immense power, is being kept.  This is, he believes, the key to designing the ultimate weapons that will win the war for the Nazis.

Meanwhile, Steve Rogers is rejected for admission into the military.  Disappointed, he leaves the medical office, and is almost immediately attacked by bullies.  His best friend, Bucky Barnes, rescues him, and we find out that Steve has always been a weakling with a heart of gold; he truly just wants to do what is right.  Bucky convinces him to come along on a double-date to the World’s Fair, where we see an original human torch costume (though, it can’t be labeled as such in the movie due to Fox currently owning the movie rights to the Fantastic Four).  We also get to see an incredible floating car being exhibited by Tony Stark’s father, Howard.  During all of this, Rogers tries to enlist again, and is noticed by Abraham Erskine.  Erskine has been working on a super-soldier formula, and believes that Rogers will be the perfect candidate.

Before the serum can be tested on Rogers, he must undergo basic training.  There, he exhibits great intelligence, courage, sympathy, and perseverance, which attracts the attention of Peggy Carter, a very talented British spy.  As the two grow closer, their affections begin to bloom, and an attraction is obvious.

The formula is a success, but immediately after the trial, Erskine is shot, the formula is stolen, and the perpetrator almost makes a clean getaway.  In the first usage of his newfound strength, Steve outraces the villain’s getaway car, and even swims faster than a submersible.  The assassin kills himself, and the formula is ultimately lost, dooming the super-soldier program to be a one-off.  Other than Steve, there will be no other perfect super-soldier. 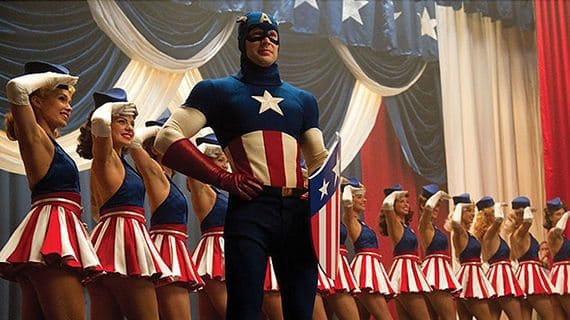 Steve is not wanted in the army by the generals for some shaky reason, and he ends up becoming a symbol instead, acting in stage productions to help convince people to buy war bonds and support their soldiers.  While his act is a roaring success in America, the same cannot be said of his performance in Europe.  The soldiers are less than impressed with his flashy costume and cheery acting; after all, they’re dying on the front lines while he’s pretending to be a hero.  When Rogers finds out that Bucky and a number of other men are held captive, and there’s no plans for a rescue, Rogers decides to prove everyone wrong and become the hero he knows he is.

This rescue is a success, though we see Bucky plugged into some questionable machinery when Rogers finds him.  It can be assumed that this machinery is at least some part of the process that later turns Bucky into The Winter Soldier.  Nonetheless, this process isn’t complete, which means Bucky and the other prisoners are back to fighting for America, and are actually part of a team known as The Howling Commandos, led by Captain America on a number of dangerous and secret missions, which we get to see in a montage of what may as well be clips from the GI Joe movies.

Eventually, Rogers meets The Red Skull, who finally reveals his background- Erskine tested his first super soldier serum on Johann Schmidt, but the formula wasn’t perfect.  As an effect, though he is super strong, his appearance has been altered, turning his skin a deep red color and removing his hair.

His ultimate plan is to release a number of bombs, powered by tesseract technology, to decimate the world, Nazis included.  Schmidt, it turns out, has been running a secret cell organization within the Nazis.  It is a name which will hold a lot of importance for the upcoming Marvel Universe: Hydra. 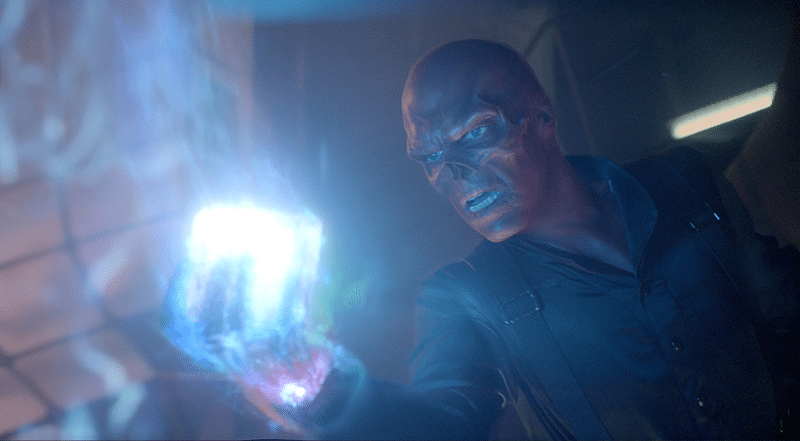 Schmidt accidentally teleports himself to who-knows-where when he grabs hold of the tesseract, leaving Steve to stop the destruction.  He manages to do so, but at the cost of his own life- he crash-lands into the freezing ocean, preventing the bomb from going off, but freezing himself in the process.

When he wakes up, he has quite a reality check as he emerges into Times Square, NYC, in 2011.  Shortly after this, Nick Fury fills him in on The Avengers, asking him to go on a mission with worldwide ramifications.

This isn’t so much a moment as a series of moments, but the best part of this movie is the relationship between Peggy and Steve.  During their final conversation, you WILL cry… unless, like Ultron, you’re a robot and can’t feel emotions.

Stan Lee is a general in this movie, who gets a little confused when someone who isn’t Cap accepts a medal in his honor.

I thought he’d be taller.

The closest connection to a one-shot is “Agent Carter,” which was totally a one-shot before it was a show. In this one-shot, which was extremely well-received, Carter is an agent of the SSR, the Strategic Scientific Reserve.  She single-handedly takes on a mission to great success, but her methods are not taken too well by her superiors, and she is reprimanded.  She is under-appreciated.  Stark calls at this time, however, and informs her superior officer that she will be one of the heads of the new S.H.I.E.L.D.

We can also take a look at Agent Carter, the TV show, as a connection.  Again, Peggy is a main character for the show, but we also get to see Dum Dum Dugan and the other Howling Commandos in an episode.  However, determining the exact continuity of the one-shot and TV show is difficult, since the TV show gives us a Peggy that is in the SSR for the duration of its first season.  It is reasonable to accept that the one-shot happens after the TV show, but John Flynn, from the one-shot, has not yet been present on the show, and Peggy made a lot of progress in the first season of the show, which doesn’t seem to align with her treatment in the one-shot.

To begin with, this is a superhero movie set in World War II with one of the first great superheroes who remains an icon to this day.  This should have been an amazing action movie, and yet, the best part of the movie isn’t any of the action scenes, it’s the romance.  Not that this doesn’t help develop the characters and the way we care about them, but the action in this movie was underwhelming.  The showdown between Cap and Red Skull was anything but climactic.  The giant Hydra tanks looked like a playset from the early 1990’s, and at times it felt like the movie was made to sell toys to children.  I think there’s really one major force to blame for this. 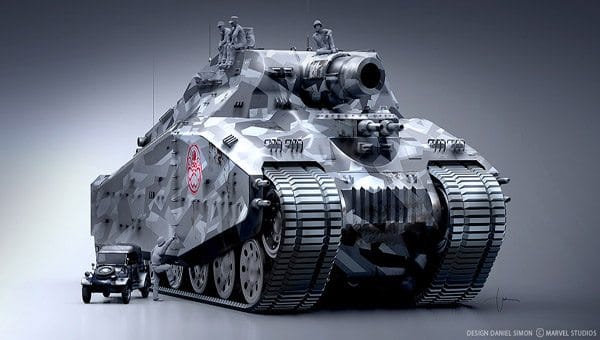 Seriously, look at that tank and tell me you didn’t own one of these with a Cobra logo.

3D movies were starting to gain popularity around the time Captain America came out.  Avatar had shown that 3D could be done well, and soon, every studio was clamoring for creating 3D movies.  The process is apparently relatively cheap to make a 3D movie, when you consider how much more the prices get jacked up for the average moviegoer who decides to get the 3D IMAX experience.  Because of 3D movies, Captain America’s action scenes were designed around a process that didn’t really work for the type of film it was.  Thor was released in 3D, but the wide shots of open space, Asgard, and the Nevada desert fit 3D very well.  It pulled you in.  Captain America’s shots were in tight, and the 3D had that cheesy Jaws 3D “Oh-my-gosh-it’s-coming-out-at-me” style to it.  The action tank playset shots looked incredibly fake in 3D, and no better in the 2D versions.

Another detractor for me was how little time was spent fighting in WWII.  Cap had a musical number and montage that seemed to last forever the first time I saw it, and yet, most of his experiences in WWII are summed up in one montage.  Somehow, it barely feels like he’s in WWII.  If I wasn’t told that the battle scenes were set in the 1940’s, I might not have guessed it.

On a positive note, the origin story of Captain America was told pretty well.  The plot hit a lot of iconic moments while developing an adversary (although I would argue Red Skull was underdeveloped).  It set up a great macguffin for the upcoming movies with the tesseract.  It also developed a great relationship between Cap and Peggy Carter.

Peggy… I’m gonna need a rain check on that dance.

This movie did successfully set up one of Marvel’s most iconic heroes, and while this movie was something of a dud compared to Iron Man and Thor, it was the final piece of the puzzle necessary for The Avengers to come together.  It also showcases what is probably the best romantic relationship, and easily one of the most tragic, in the MCU.

First and foremost, we got the character of Captain America introduced to the MCU, and brought him from the 1940’s to the early 2010’s.  That’s a pretty big accomplishment for one movie.

Setting up Agent Carter is another great accomplishment from this movie.  As mentioned up above, she has gone on to be the subject of a TV series and a one-shot, both of which have added more continuity and depth to the MCU.

As far as post-credits scenes go, we get the most direct preview of The Avengers that we had up to that point, but it’s a bit disappointing when rewatching.  The rest of the post-credits scenes really added something new and teased the next movie while being a scene… this was a teaser trailer.  Still, the message was clear- Next stop: The Avengers!

To see what happened before this movie’s release, click here for our Iron Man Revisit!
To revisit The Incredible Hulk, click here!
Click here to revisit Iron Man 2!
Our revisit of Thor is right here!