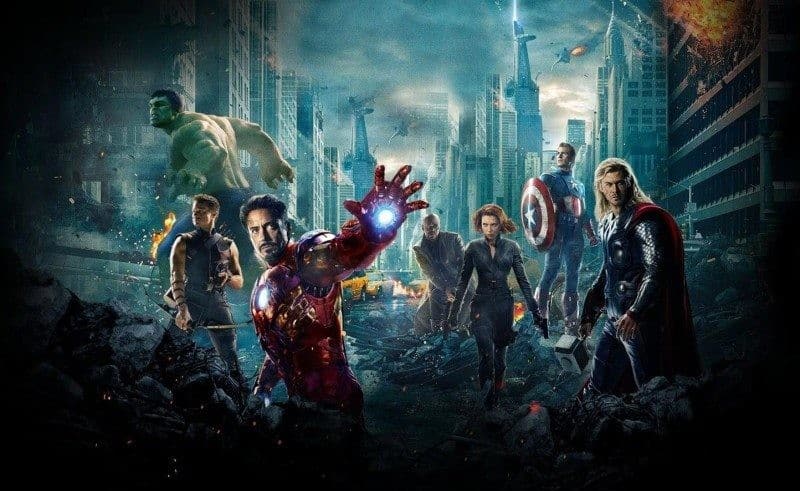 2012 was the year Marvel hit the big-time with what is currently the highest-grossing super-hero movie of all time.  I say ‘currently’ because the sequel’s about to come out!  With some seriously cool concept art thrown in, check out our thoughts on this modern Marvel classic…

The Comic Inspiration of The Avengers

Earth’s Mightiest Heroes, the Avengers are pretty much Marvel’s premiere super-team.  That wasn’t always the case, though; in the 1990s, for example, the X-Men stole that particular crown.  But Marvel Studios’ work on the core characters had already moved the franchise back to the centre of the comic book world, and it had been an open secret that the films were headed towards this climax.

“And there came a day, a day unlike any other, when Earth’s mightiest heroes and heroines found themselves united against a common threat.  On that day, the Avengers were born – to fight the foes no single super-hero could withstand!  Through the years, their roster has prospered, changing many times, their glory has never been denied!  Heed the call, then – for now, the Avengers Assemble!”

In the comics, the Avengers were united in pursuit of the Hulk, who had been framed by Loki.  The initial team consisted of Ant-Man, Thor, Iron Man, and the Wasp, and the Hulk was an uncomfortable fit with the team for a while.  Their changing roster soon brought Captain America to their ranks, when they discovered him frozen in ice.

The early 2000s featured Marvel’s Ultimate line, an attempt to update their characters and continuity in order to streamline the books.  It was no surprise that, in 2002, the line featured an updated version of the Avengers – the Ultimates.  Where the original Avengers had focused on bringing the super-heroes together for mass events, the Ultimates essentially featured a bunch of insecure, flawed people; character interaction was as much the drive of the series as super-hero action.  And, in contrast, this version of the Avengers was proactively formed by Nick Fury, head of S.H.I.E.L.D.

The Ultimates had a different roster; Captain America, Ant-Man, Wasp, Hulk, and Iron Man, soon joined by Thor, Quicksilver, the Scarlet Witch, Hawkeye, and Black Widow.  After an initial pursuit of a rampaging Hulk – who, in the Ultimate universe, was a libidinous cannibal – they wound up dealing with an alien invasion by the Chitauri, who were loosely based on the mainstream books’ Skrulls. 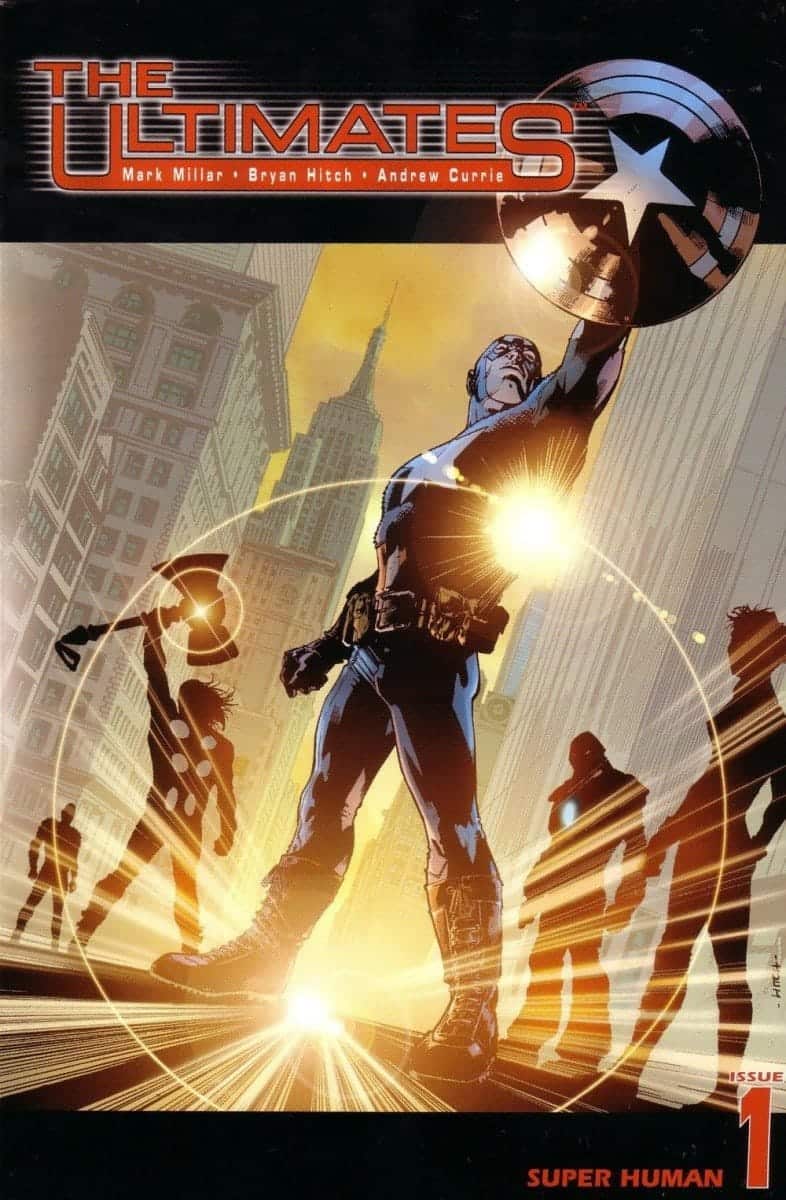 Joss Whedon pulled threads from both origins when he wrote ‘The Avengers’.  In keeping with the 1963 origin, Loki is the main villain; however, the scale is upped, with the Chitauri – conceptually closer to that theme of facing foes “no single super-hero could withstand” – launching a full-scale invasion.  S.H.I.E.L.D.’s role in founding the Avengers had already been established as a cornerstone of the Marvel Cinematic Universe, but this is neatly subverted, and the Avengers ultimately remain a separate entity from S.H.I.E.L.D.  The roster is closer to the Ultimate version, although Ant-Man, Wasp, Quicksilver and the Scarlet Witch were relegated to Phase Two.

Summary of The Avengers

S.H.I.E.L.D.’s experiments upon the Tesseract are interrupted by the arrival of Loki, who now bears a sceptre with which he can manipulate minds; he takes the Tesseract, scientist Eric Selvig, and Hawkeye.  In response, recognising a threat beyond his control, Nick Fury begins to gather key figures; Captain America, Bruce Banner, Black Widow, and Iron Man.

To cover a raid, Loki launches a public attack in Germany, and Captain America and Black Widow intervene.  Although they are outmatched, the arrival of Iron Man tips the battle in their favour, and Loki surrenders.  En route, Loki is taken for judgment by Thor, and a super-hero slugfest ensues; in spite of which, Loki does not attempt to escape. 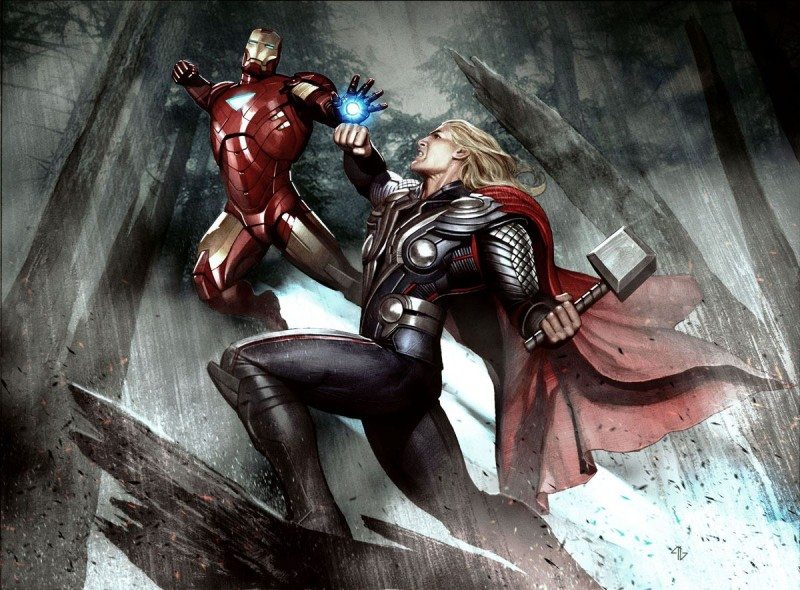 On the Helicarrier, the heroes struggle to interact; Loki’s magic is working against them.  Black Widow realises too late that the Hulk is Loki’s weapon against S.H.I.E.L.D., a time-bomb his mental manipulations have prepared to set off.  As the Avengers bicker, Hawkeye and Loki’s agents attack, almost bringing down the Helicarrier.  Agent Coulson is murdered by Loki, Hulk is blasted off the Helicarrier after a rampage, and Thor is almost killed in a device S.H.I.E.L.D. had designed to control the Hulk.  One plus: Black Widow recovers Hawkeye!

The battle-worn heroes put the pieces together, realising that the new energy-source at Stark Tower will be used to power the Tesseract – opening a portal.  They arrive too late, and assemble against hordes of invading Chitauri.  As battle rages, they gradually work out how to shut down the Tesseract with Loki’s sceptre. 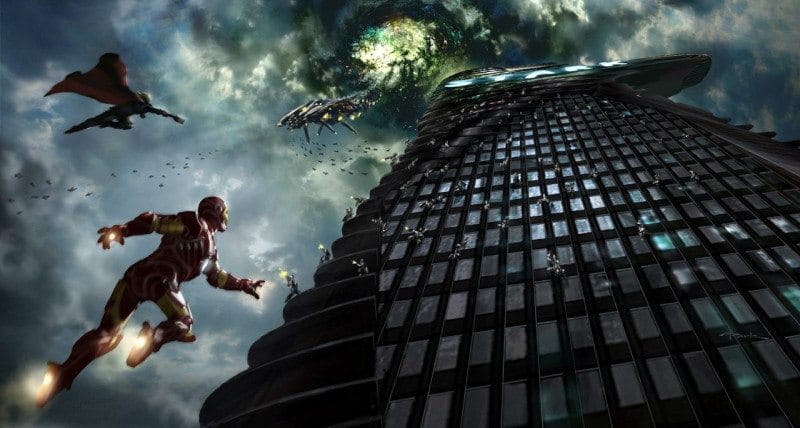 Meanwhile, S.H.I.E.L.D.’s Council views Manhattan as a loss, and – in spite of Nick Fury’s armed resistance – launch a nuclear strike.  Iron Man intercepts the missile, successfully forcing it into the portal at great risk to his own life.  With that done, the Avengers close the portal.

In an end-scene, we learn that the Chitauri were servants of Thanos.

In a really fun scene, Black Widow apparently leaves herself vulnerable to Loki’s manipulations.  He’s armed by knowledge gained from Hawkeye, and he knows there is red in her ledger.

“Barton told me everything.  Your ledger is dripping, it’s gushing red, and you think saving a man no more virtuous than yourself will change anything?  This is the basest sentimentality.  This is a child at prayer… pathetic!”

As Loki piles on the pressure, Black Widow reacts, visibly shaken at his words, until he drops a single hint.  Then, suddenly, her whole manner and bearing changes.

The Trickster God has been tricked by the super-spy!  And the icing on the cake is that she turns to face him and calmly says:

“Thank you… for your cooperation.”

Incidentally, Travis disagrees with me on this one, and I can see his point – the dialogue doesn’t make perfect sense, but it’s the quality of the acting that really makes you cheer.  Travis’ favourite was a serious contender.  Two words: “Puny god.”

This one shows up way late in the movie – to the point that the first time I watched the movie, I thought we weren’t going to get one (the old man who refuses to kneel just screamed “Stan Lee cameo” to me, and when we didn’t get it, I thought we were out of luck).  Nonetheless, Stan the man shows up in a news report, voicing disbelief.

“Superheroes?  In New York?  Give me a break.

The Avengers’ One-Shot and Show Connections

The Chitauri invasion is very much seen as the catalyst for Phase Two.  In ‘Agents of S.H.I.E.L.D.’ Season One, we learn that Nick Fury had worked on various back-up strategies to keep the Avengers in play, notably the enigmatic T.A.H.I.T.I. project.  To be used upon the death of an Avenger, Fury used it to bring Coulson back into play, and everything in ‘Agents of S.H.I.E.L.D.’ really hangs on that decision.

The Marvel One-Shot “Item 47” also continues with the Chitauri connections, as it shows two criminals recovering a Chitauri weapon, fixing it, and using it to help their crime-spree.  The two end up getting recruited by S.H.I.E.L.D., though they haven’t yet appeared on the show.

The ‘Daredevil’ series also spins out of ‘The Avengers’.  Kinetic Analysis Corps, one of the leading disaster-cost prediction firms in the world, estimated that the economic cost of the Chitauri invasion would have been $160 billion, with clean-up costs of $90 billion.  In the Marvel Cinematic Universe, this has led to some major changes in the city, with crime boss Wilson Fisk’s Union Allied corporation getting a lot of the contracts and taking over crime in Hell’s Kitchen.

All the previous films had essentially become set-up for this, the crowning jewel of what became known as Marvel’s Phase One.  And, with the capable and witty skill of Joss Whedon behind it, ‘The Avengers’ – or ‘Avengers Assemble’ as it was marketed in the UK – was an absolute hit.  It united Robert Downey Jr’s Tony Stark, Chris Evans’ Captain America, and Chris Hemsworth’s Thor, with Jeremy Renner’s Hawkeye and Scarlett Johansson’s Black Widow.  Tom Hiddleston shone as the villainous Loki, and kept his crown as king of Marvel’s villains. 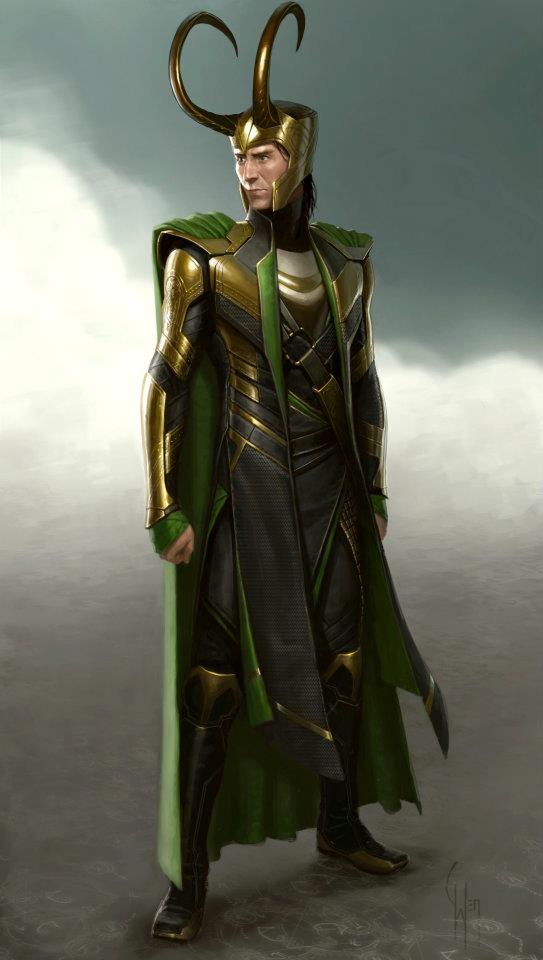 The scale was bigger than ever before.  Whereas the other films were essentially skirmishes, with varying degrees of public awareness (the biggest probably being in ‘Iron Man 2’, with the crisis at the Stark Expo), this was a fully-fledged alien invasion in New York City.  And, just for laughs, let’s throw in a Stan Lee cameo mocking the very idea of super-heroes in New York…

What made the film really stand out was the quality of the team.  As you’d expect from anything penned by Joss Whedon, ‘The Avengers’ featured a serious amount of banter, and he really capitalised on the Iron Man / Captain America dynamic.  Even non-super-hero fans found themselves watching this and laughing.  This all came to a head in a wonderful scene where Loki’s magic turns the Avengers against one another, and you watch with serious chills and wonder how this team will ever come together.

The answer is through a death.  Clark Gregg’s Agent Coulson is sacrificed to Loki’s spear.  And Samuel Lee Jackson’s Nick Fury, himself a character as prominent as any of the heroes, plays the hand he’s been dealt in order to pull the team together.  For all the fact this was a Comic Book Death, it didn’t feel at all trite.

Ultimately, every single character goes through an arc in this film.  Steve Rogers becomes the leader we all knew he could be, in a delightful scene where he even gets to give the Hulk an order he can’t refuse.  Iron Man becomes a true hero, making the hardest call of all.  Black Widow, in a brilliantly twisty bit, commits to wiping some red from her ledger.  Hawkeye works towards payback.  And Bruce Banner learns the nature of the Hulk. 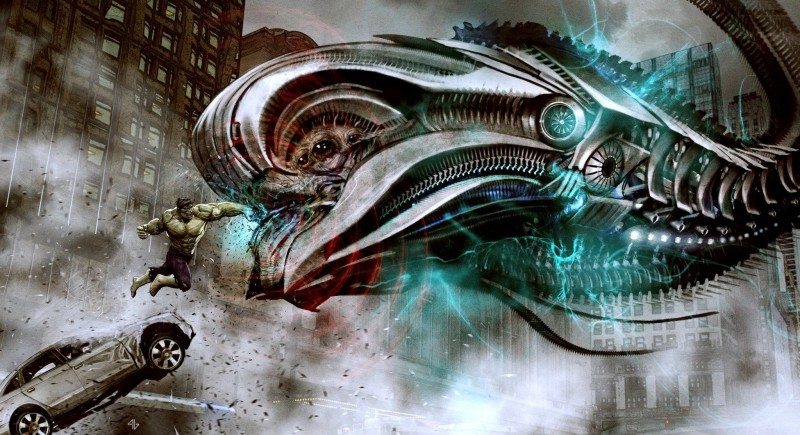 It’s a don’t-miss, and – at time of writing – the best movie in the Marvel Cinematic Universe.

The Avengers’ Impact on the Marvel Cinematic Universe

In a sense, ‘The Avengers’ was the highest-risk part of Marvel’s project.  They had built towards an epic, and the pressure was on to perform; had they struck a single wrong note, the Marvel Cinematic Universe would have seriously suffered as a result.  While other films, such as ‘The Incredible Hulk’, could be weaker, this had to be a blockbuster.  And, with a marketing juggernaut behind it and the tremendous skill of Joss Whedon in charge, it was a blockbuster.  The Marvel Cinematic Universe was assured a place in film history.

The movie picks up threads from all the films before it, most notably ‘Thor’, ‘Captain America’, and ‘Iron Man 2’.  ‘Iron Man 3’ would use PTSD from this experience as a major element of its background characterisation of Tony Stark, while Captain America – the most natural fit for S.H.I.E.L.D. – was set up for ‘Captain America: The Winter Soldier’.

In retrospect, though, the most interesting aspect of this is the ambiguous nature of S.H.I.E.L.D.  The film features a power conflict between Nick Fury and a Council to whom he is responsible, and we’re left with the sense that not everybody in this Council can be trusted.  In fact, ‘Captain America: The Winter Soldier’ established the corruption of S.H.I.E.L.D., and that some members of the Council – including the spokesman who called the nuclear strike on New York – are Hydra agents.

Want to check out the rest of Phase One?

Click here for our Iron Man Revisit!
To revisit The Incredible Hulk, click here!
Click here to revisit Iron Man 2!
Our revisit of Thor is right here!
And don’t miss our revisit of Captain America: The First Avenger!