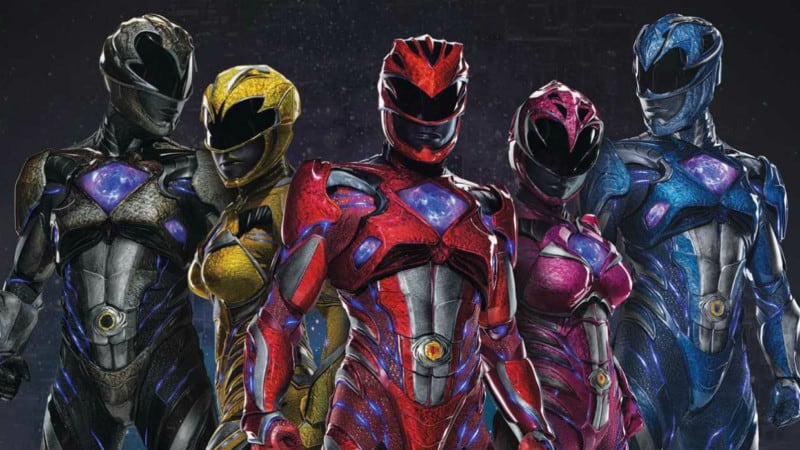 The only logical move after releasing a nostalgia-driven film like SABAN’S POWER RANGERS (aka just POWER RANGERS) is to release a sequel that features the Green Ranger. Since we’re far from that, the next best thing is a comic book that takes place shortly after the events of the film. It’s a smart tactic, but does it pay off? That depends on who you ask. For me, SABAN’S POWER RANGERS: AFTERSHOCK, like the film it follows, left me with mixed feelings.

If you liked the POWER RANGERS movie, you’ll love this comic. The illustrations by Lucas Werneck and colors by Joana Lafuente match the film’s visuals. At some points it’s dark but the colors of the Rangers and their Zords always pop. The comic versions of the Rangers look very close to their real-life counterparts, and the design of new characters don’t betray the aesthetic of the film. While the art is on point, the writing by Pat Carney is where the book lacks and I’m not totally convinced it’s all his fault. 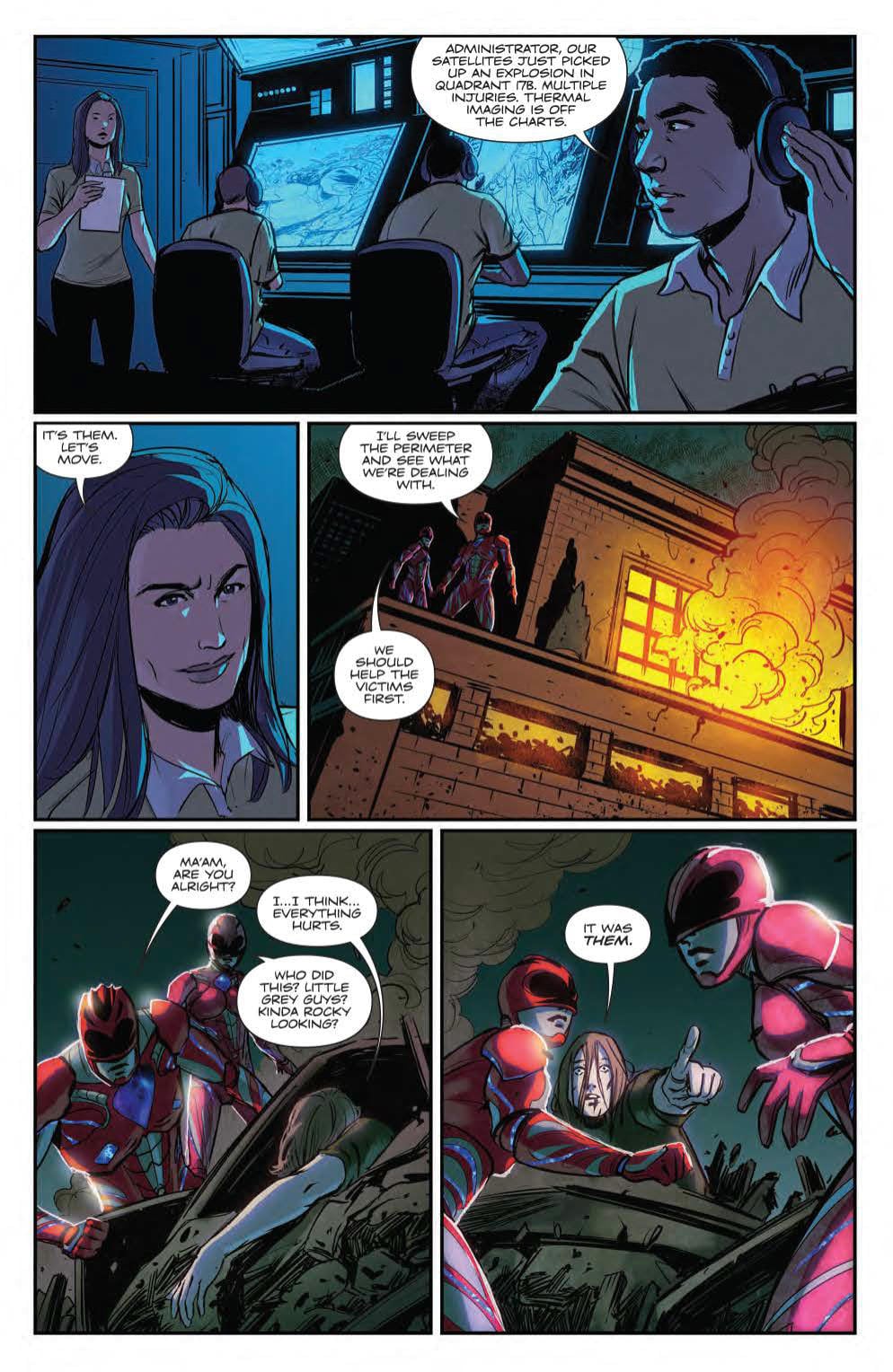 If you like the POWER RANGERS movie, you’ll love this comic. Lucas Werneck’s illustrations and Joana Lafuente’s colors match the visuals of the film. At some points the images are dark, but the Rangers and their Zords always pop. The comic versions of the Rangers resemble their real-life counterparts, and the design of comic-only characters doesn’t betray the aesthetic of the film. While the art is on point, the writing is where the book misses mark.

READ: Is all this talk of the new making you miss the old? Check out why we love the original 90s Rangers!

I’m not convinced it’s all writer Pat Carney’s fault. The problem with doing a book like SABAN’S POWER RANGERS: AFTERSHOCK is that it’s a movie-tie. The comic’s narrative takes place between two movies: one that’s already released and one that isn’t even written yet. There are many variables to account for: how do you create a book that takes place after a new film without spoiling a future one? What can or can’t your characters say and do? SABAN’S POWER RANGERS: AFTERSHOCK can’t go too far in any one direction, and it shows.

I don’t imagine writing a comic that must be approved by a movie studio fosters creativity. Projects like these must be like publicly defending a caught-red-handed murderer: no one wants the job, but someone has to say yes. Carney fared decently considering the circumstances, and yet the book has a lot of questionable decisions that seem his making entirely. Why throw another generic, city-destroying villain in the mix? Why is there no sign of military forces? Where are the Rangers’ parents, who must be concerned about them? Also, some of the dialogue seems misplaced, forcing the reader to backtrack to understand the (uninspired) story. 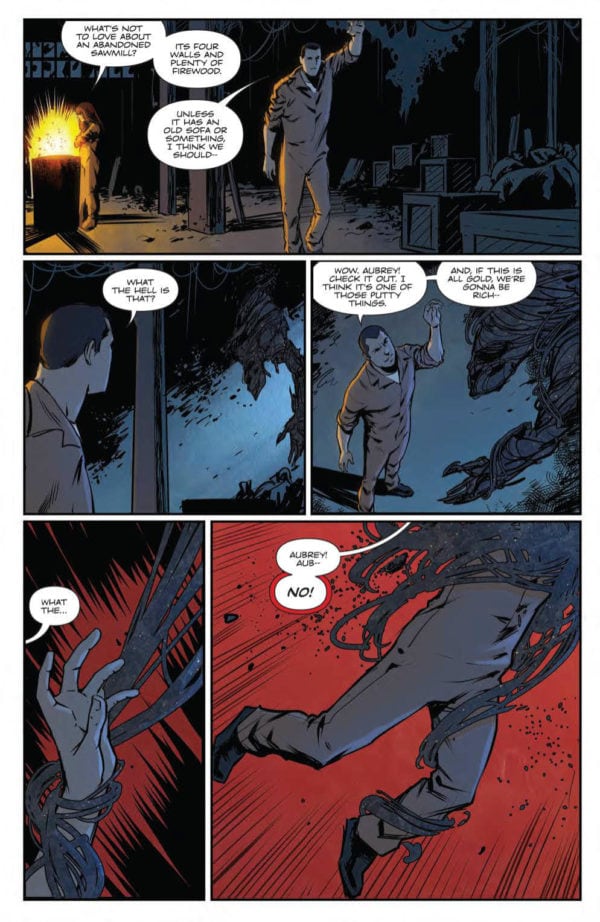 What Carney manages to do well is what the movie did well: highlight the Rangers. He does this by creating three main stories: one about Jason Scott’s leadership; another featuring Apex, an organization that monitors the Rangers for the government; and a story starring the villains, a pair of homeless teens who feel overlooked by the city and want to destroy Angel Grove. While each story involves the team, the most noteworthy story is how the Rangers struggle with accepting Jason as the leader. While it bookends with a corny football analogy, the dialogue between the Rangers is honest and, impressively, sounds like the characters in the film. The characters’ dynamism bleeds onto the page. After Kimberly gives him a pep talk, she and Jason almost kiss. Confident Zack questions himself after he freezes up in battle. The usually cold Trini finds team spirit and even utters the famous line, “Go, Go, Power Rangers!” Carney’s small moments are his best because they expand on some of the finer moments of the film.

READ: Haven’t picked up MIGHTY MORPHIN POWER RANGERS? Find out why you should be reading it!

Ultimately, SABAN’S POWER RANGERS: AFTERSHOCK is a little clunky but gives you more of what you like about the movie: the characters. It’s not a must-read comic, but it get’s the job done. If you can keep people interested in these characters without spoiling anything, you’ve done well. If you don’t like the film, you won’t like the comic, but then again, this book obviously wasn’t written for you. Provided SABAN’S POWER RANGERS makes enough money to warrant the five sequels Lionsgate and Saban have planned, I hope the tie-in comics explore the Power Rangers mythos. As it is a long, multi-dimensional history, it should be easy to publish side stories like Marvel does for STAR WARS. That’s all for the possible future. For now, let’s appreciate the fact that there are Power Rangers in the world again. What a time to be alive!