A Love Letter to the Magic of Music

In the stunning finale of Kieron Gillen and Jaime McKelvie’s PHONOGRAM: “The Immaterial Girl,” we find our heroine, Emily, coming to uneasy terms with herself and with David Kohl finding his future. We also welcome a new group of kids to The World’s End. 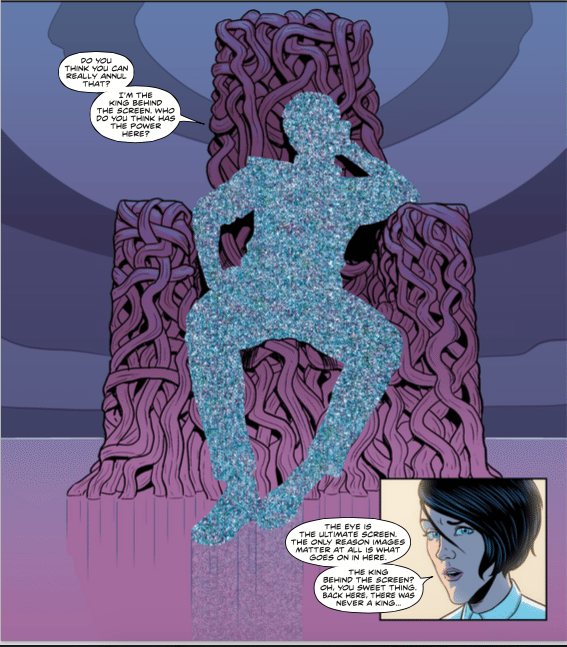 In this issue, we find Emily being faced with Michael Jackson’s death and what that means for her, the other kids at The World’s End, and the entire world. This comic is beautiful in the fact that it tells not just Emily’s story but also the stories of many others. We learn the future of several of the kids and get to see little glimpses of things that they have found to make them happy, even at this time of hopelessness. 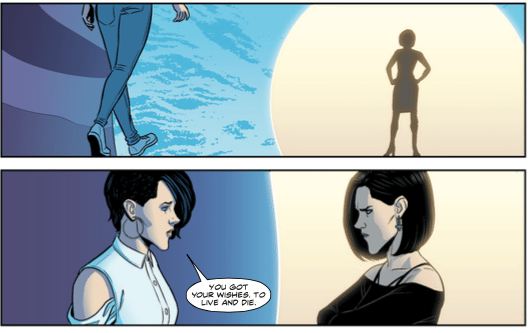 The art is beautiful. McKelvie has a way with expressions and emotions that makes his art a delight to look at, and Wilson’s use of colors just fits so well into the mood of the story. The colors of the book range from soft, dark blues and purples, to bright reds, each color fitting the mood of the writing on the page.

Gillen’s writing is, as usual, concise and beautiful, but this week’s book was extra-special for two reasons. The first is that it was the finale of the mini-series, and so he had to tie up all of the loose ends, which he did beautifully. The second is that, terribly, the issue was released only a week and a half after the death of David Bowie. 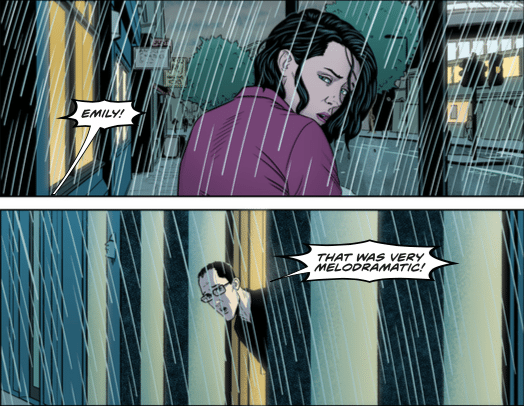 David Bowie and Michael Jackson were both respected, beloved musicians. They had fan followings from all over, and, for these fans, the world stopped when their deaths were announced. Jackson, who died in 2009, was getting ready to do a fifty-concert residency in London, which would have started about three weeks after he died. Bowie had released his final album only two days prior to his death.

This comic is unique in the fact that it has, what Gillen calls, “B-sides.” These are essentially short stories that are separate from the main plot. This issue had a story based on a Bowie album as inspiration.

Of course, the comps for the last ever #phonogram come today. The last story in it is a Bowie one too.

This book going into Emily’s exploration of Jackson’s death was an unintentionally timely but beautiful exploration into the love of music, and the b-side was a lovely tribute to Bowie as an artist.

This issue of PHONOGRAM was the last. It took almost ten years for Gillen and McKelvie to publish 17 issues, but they were a beautiful 17 issues.

PHONOGRAM was a beautiful and unique ride, featuring many things that are not explored well in comics. Exploration of women, teenagers, and non-heroes are some of the things, among others, that make PHONOGRAM so interesting. Emily is, at the heart of everything, a teenage girl, and sometimes you can see that. However, in the moments you can’t, it doesn’t feel overly forced or unnatural, she just seems to understand the world a little better than most.

Most of the time, I would not spend so long discussing something that is, at its base, unrelated to comics, but Bowie’s story is important to the context, though unintentionally so, of PHONOGRAM. This issue of PHONOGRAM helped nail the heavy, emotional feeling that music and musicians give us, especially in tragedy.