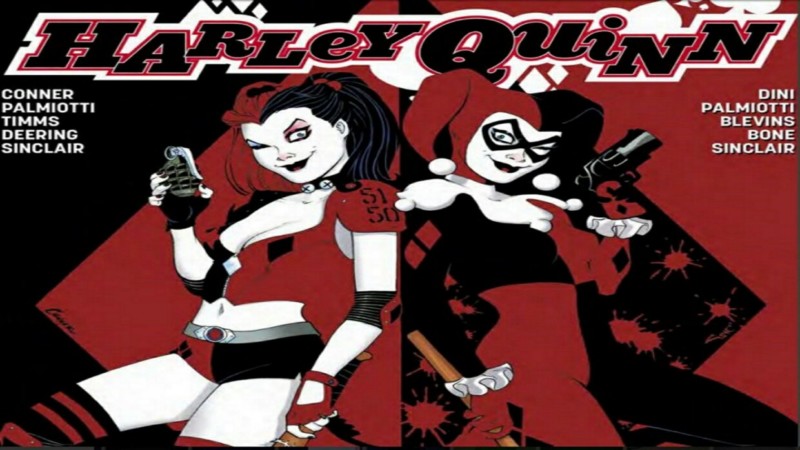 At the beginning of most story arcs, writers have to establish a majority of the plot threads they’ll be exploring throughout future issues. HARLEY QUINN #17 does this through a rather gruesome intro sequence. This issue,  written by Amanda Conner, Jimmy Palmiotti, and Paul Dini with the art done by John Timms, starts with a bang. A group of presumably homeless people being round up into a meat cooler for mysterious reasons. They don’t appear alarmed, some of them even seem to think they’re going to be fed but, unbeknownst to them, they’re the ones on the menu. As they’re slaughtered in a fairly brutal series of panels, it shifts to Harley walking down the city streets, wondering where her homeless friend is. When she learns from the mayor that her pal isn’t the only one missing, she goes with Red Tool and Egg Fu to a park in Brooklyn. Harley disguises herself as a homeless person in order to find out what has happened to the victims. As this goes on, the villainous Harley Sinn lurks in the background, plotting a sinister scheme that is yet to be fully revealed.

READ: Curious what we thought of the previous issue? Take a look at our review of HARLEY QUINN #13 here!

The two most notable things about this issue are the backup story that appears at the end of the actual arc, written by Paul Dini, and the PSA about homeless individuals towards the middle of the issue. Personally, I like it when comics use their medium to spread awareness of bigger issues. While it’s fun to see heroes inform the readers about issues like voting or wealth inequality, there’s something strange about hearing it from Harley Quinn. She’s not truly a hero, despite her attempts to reform herself. While she is popular, she’s infamous for being delightfully insane, not for having a real insight into the plight of the homeless. Although, it was fun seeing Harley return to her Harleen Quinzel persona in order to properly explain the situation, how she has been acting recently within the cannon makes this sudden shift in personality feel like something totally out of left field. Characters can have nuance, but it doesn’t seem viable that Harley Quinn would be capable of understanding the complexities of homelessness and why it happens to people. Though if she had personally experienced this truly devastating situation, her empathy would make a lot more sense.

The artwork is absolutely fantastic. John Timms does a great job balancing a more cartoon-ish background and bright colors with realistic closeups. The panel layout also does this through uneven spacing and mad transitions, perfectly resembling the character the book is about. This really stands out towards the end of the main story when a group of teenagers attempts to burn down the tent Harley Quinn’s using to investigate what’s happening to the homeless people. So naturally, when the teens attempt to mess with her, she gives them the old one-two, handing them their buttocks on a silver platter. The vibrant embers illuminate Harley as she threatens the little pyromaniacs with the end of her bat. This scene leads to a well-choreographed fight sequence wherein the little snots get what’s coming to them.

While the main story has a few memorable moments, the one I found myself most excited to read was the short “Harley Loves Joker,” written by Paul Dini and Jimmy Palmiotti, at the end. I’ve never liked the relationship between Harley Quinn and the Joker. The Clown Prince of Crime is a bad person, incapable of loving anyone. Despite my objections to their romance, I have to say that their hijinx did give me a little smile by the end.

READ: How has Harley’s character changed over the years? Dive into our character analysis here!

The Joker doesn’t really act like some sinister villain in this story. In fact, he actually behaves more like the version of the character from the Adam West BATMAN TV show, robbing banks and getting into trouble. The Joker even gets sick for the middle part of the short, leaving Harley to try and make him feel better. Plus, Harley wears her original jester outfit in this story which, I have to admit, brought back a lot of nostalgic feelings. Admittedly their scenes together are quite cute, but that’s only in comparison to how bad we know the Joker could be.

Written by one of the original writers for BATMAN: THE ANIMATED SERIES, Paul Dini clearly has a good handle on the characters. My only real complaint with this short is that the tone is drastically different from the rest of the comic. It was weird to go from a story about searching for missing homeless people to a love story. Despite this minor gripe, it was still an enjoyable light read.

While the book looks great, it had originally touted itself as setting up a revenge story for Harley Sinn. I don’t doubt that there will eventually be a story for Harley Sinn. They do briefly introduce her in the middle; she just isn’t fully developed by the end of the comic. That is this work’s biggest issue. The setup is interesting, who doesn’t love the idea of Harley bashing in the skulls of man-eating monsters? Unfortunately, there just isn’t enough to go off of and, after a week, I’m not sure I’d be interested in seeing what happens next.