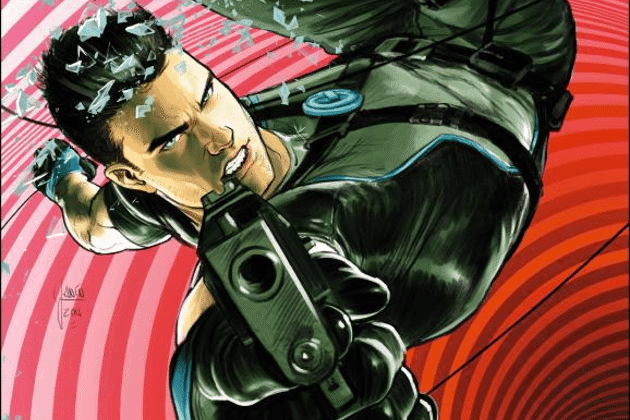 The story of Dick Grayson as a secret agent continues! In this issue Dick is battling not only the villain The Old Gun, but also his fellow agents of Spyral.
The issue begins with The Old Gun killing a low-level criminal who had access to Paragon’s eyes. Our hero’s mission is to retrieve the eyes from The Old Gun. We get a quick overview of his backstory; he was the victim of a shooting and lost his two sons in the process. His eyes were severely damaged, so he did what any rational human being would do: he had his optical nerves surgically connected to his two pistols. This brings up so many questions on his anatomy, I even don’t know where to begin. Let’s just try not to think about it.

Dick Grayson manages to seduce a girl (Agent 8) while she helps him to shoot a gun (eat your heart out James Bond). She represents the life he has to look forward to, a life of guns and getting the job done with no second chances. Being a Nightwing fan boy, this does not sit well with me or with Dick. One of the great qualities of Dick Grayson is that he is always willing to give the villain a second chance. He does attempt to give The Old Gun a chance to redeem himself initially, but is then saved by Agent 1 who had no cover. Agent 1 is Agent 8’s partner and this causes some tension between her and Dick. She brings up the interesting thematic point that superheroes use all kinds of weapons but they all have a problem with using a gun. Dick tells her that is not how he fights, but she tells him that he isn’t a superhero anymore, he’s a spy.

Dick then contacts Batman, who represents the life he once had, and who helps him realize that The Old Gun wanted to use the eyes so he could see his son start Pre-school. We get to see Dick give The Old Gun another chance to make things right for everyone, for Dick, for his son, and for himself. Dick was able to solve everyone’s problems with no one dying, but then Spyral showed up. The end result was the deaths of Agent 8 and The Old Gun. From this issue I don’t feel that Dick needs time to transition from superhero to spy, I feel he needs to go back to being a superhero. He’s obviously not happy with his new role and it doesn’t look like he will ever be. The issue ends with Spyral telling Dick’s partner, Matron, to track down someone who has sent a transmission within Spyral and to remind them that Spyral will unmask all.