BATMAN #38 strays from the “Superfriends” storyline and takes us to a dark time in Gotham. We’re told the tale of billionaire orphan Matthew Warner and the tragic death of his parents. Retreating to Bruce for help and understanding, the story sounds all too familiar to the billionaire playboy. So we follow the Dark Knight as he unravels the mystery and horrors that follow. Tom King has broken away from Bruce’s lighthearted moments into possibly the darkest Batman story he’s written so far! So find out more in “The Origin of Bruce Wayne”! 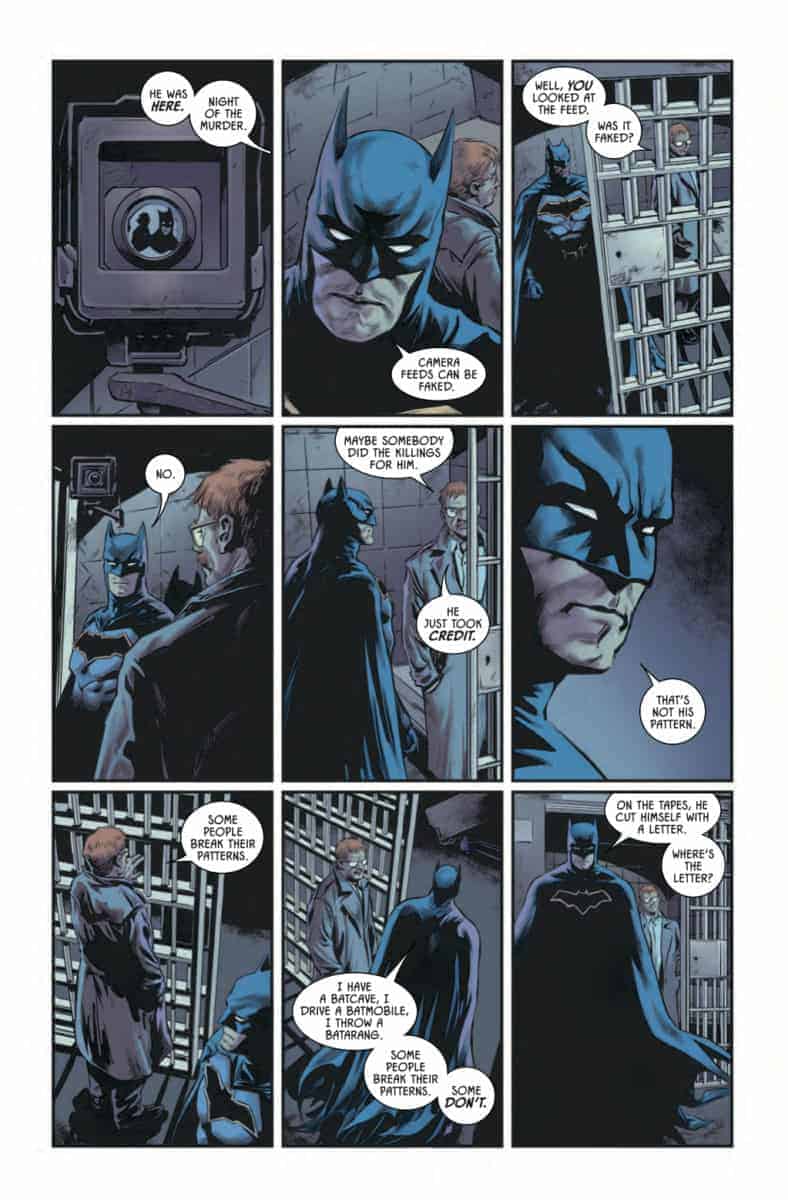 BATMAN #38: I Looked Into The Abyss

So far, Tom King has provided a great take on Batman. Crafting great moments, like Bruce conquering fan-favorite villains like Bane, and pursuing an amazing romance with Catwoman. In BATMAN #38 he gives us a one-shot we won’t soon forget. Opening up with the death of a young boy’s family and his meeting with Bruce, seeking advice. The second page of the issue sets up the story if you’re reading into it carefully. Matthew, the young boy, notes that he pretends to be Bruce Wayne. Not only mentioning that his father used to joke by calling him Bruce but strangely his Butler still does as well.

Feeling all too sympathetic for what the rich young boy has gone through, Bruce suits up and hunts down the murderers. Batman studies several crime scenes, all seemingly committed by his rogues. So these events appear to be caused by Zsasz, Two-Face, or even the boy’s Butler. All leading up to the real maniac behind everything. A page-turning thriller that you won’t be able to put down! 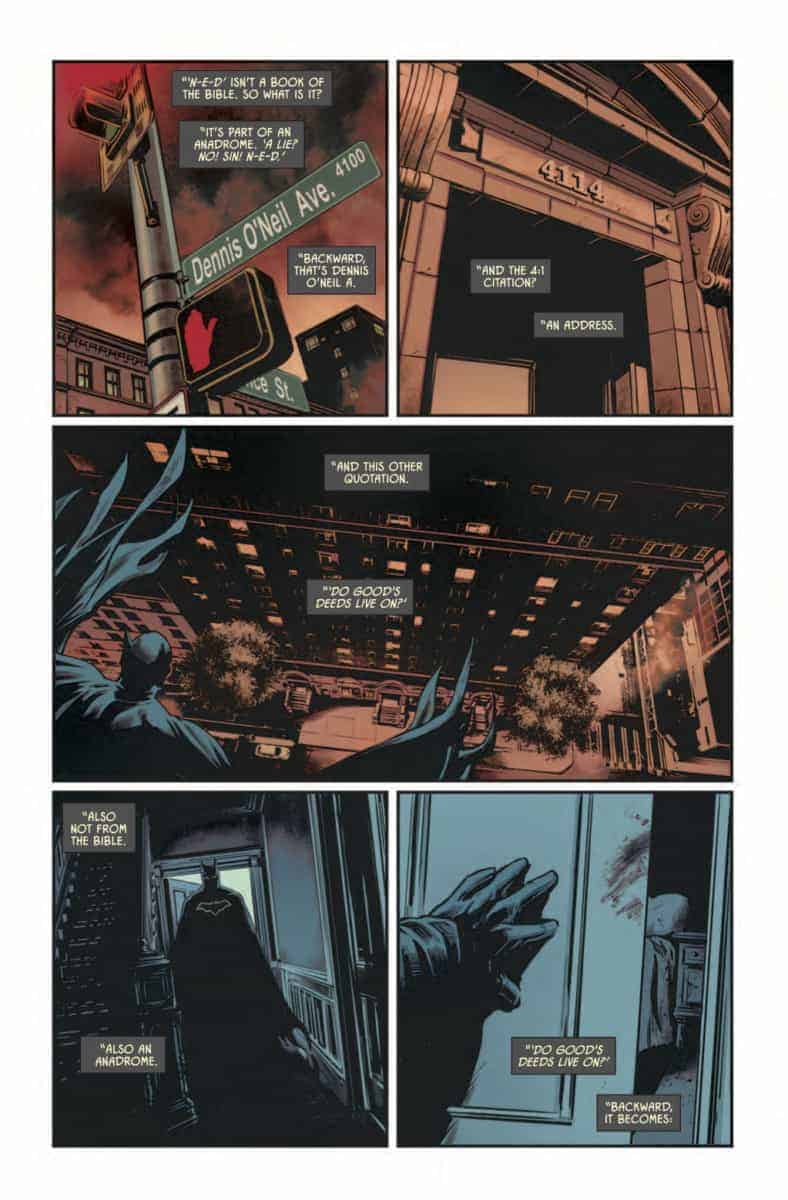 Tom King has proven that his fantastic storytelling techniques work over and over throughout this series. Although it has begun to feel a bit overused, his mirror panels have become a distinct part of his style. He does it in a masterful way, which compliment’s his insight on Batman. One of the best times he used this was in the previous issue of BATMAN, where he showed how relatable and yet different Batman and Superman are. He does this again with Bruce and the boy from the first page, with both of them walking into their home and what they’re both welcomed to upon entering. King’s writing has been bringing out the best in many of the artist’s he works with as well. 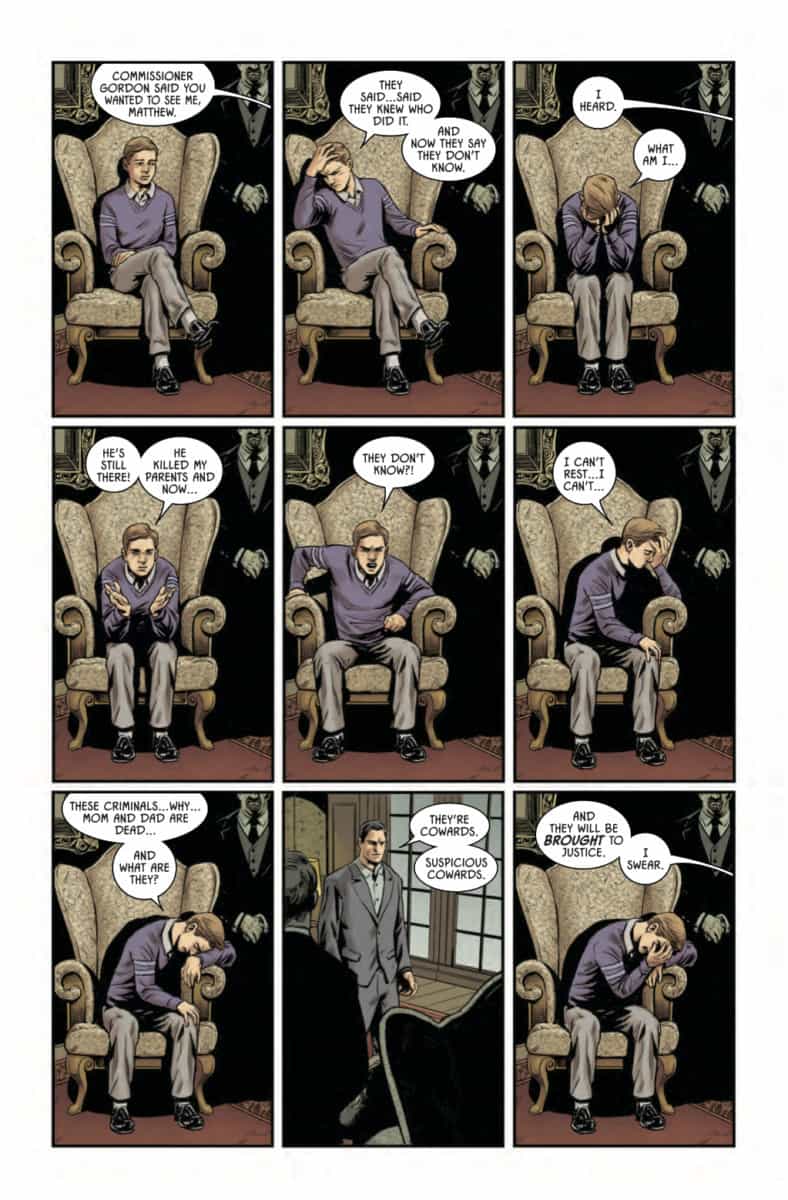 Along with that, Travis Moore jumps onto Batman as one of the many rotating artists for the book. The mirror storytelling allows the artist to be a bit more structured in panels, giving the side-by-side comparison that King’s scripts call for. Travis does an amazing job with making each page move fluidly during the short time gaps in each panel. Page twelve (shown above) would be an excellent example of how he brings more expression to Mattew than just dialogue ever could. Hopefully, we see more of Moore’s work in the pages of future BATMAN issues.

Overall, BATMAN #38 catches us all by surprise with the break from the current arc, but in a great way. These one-shot stories have been some of King’s best work so far. Similar to the Swamp Thing issue a while back, this goes a bit further down the dark mind of Tom King. Something that, as readers, we all hope to see more of in the future. The mystery behind the entire crime will shock readers, but it’s really the artwork that ties together everything to make that punch harder. Check out BATMAN #38 and give us your thoughts below!