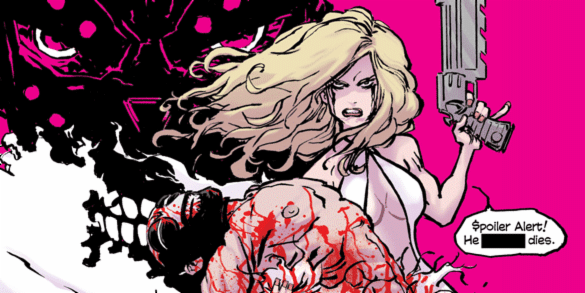 With the fifth issue out, RENATO JONES: THE ONE% has completed its first season. Every issue so far has been increasingly action-packed with more violence, plot twists, and cliffhangers. Renato is determined to make every evil billionaire pay a price they never expected to pay.

However, the engaging plot is not the only factor that has readers hooked. The stellar artwork of Kaare Kyle Andrews never fails to impress. The flashback scenes look old and rusty while the present moments are more colorful and vibrant. The black and white artwork to symbolize intense moments is equally captivating.

The second issue of RENATO JONES : THE ONE % starts off by introducing a new target of Renato – son of a real estate mogul, Christopher Baal. It’s hard not to notice the uncanny resemblance of Christopher Baal and real life evil billionaire Donald Trump. The opening panel shows a fired employee begging Mr. Baal to take him back as he is struggling to provide for his sick wife. Mr. Baal kicks the man out of his way and gets into his car, accompanied by his supermodel girlfriend. He lays off a couple of workers over the phone and claims to have the power to do anything as he has bankruptcy protection. 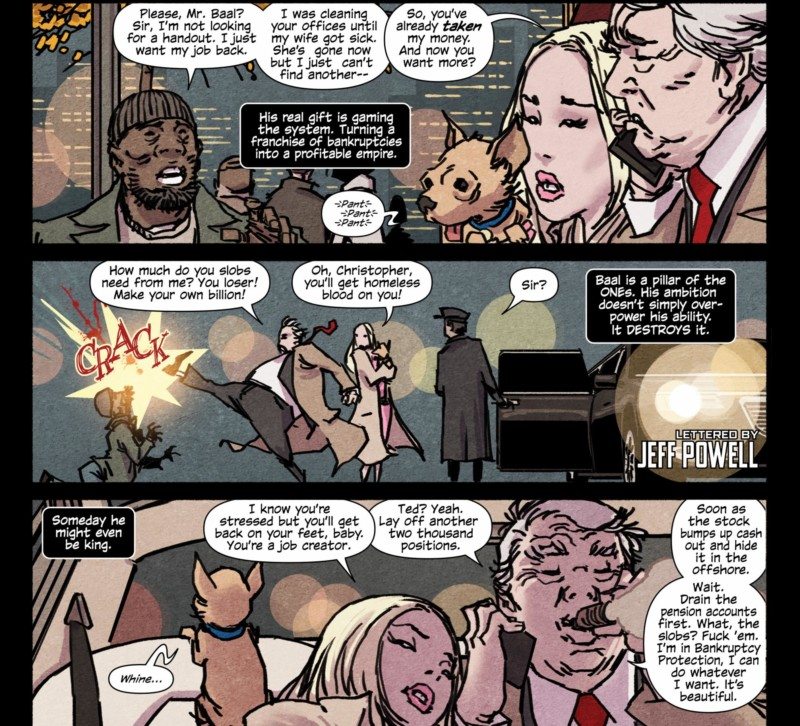 What Mr. Baal doesn’t know is that he is the next person on Renato’s hit list. Renato disguises himself as the vigilante Freelancer by wearing a mask and a suit to punish Mr. Baal. Renato takes on the identity of missing hedge fund manager Douglas Bradley (D.B.) to attend the same masquerade party as Mr. Baal. The most shocking moment of the party is when a door is unlocked and crying children are about to be subject to human trafficking. Freelancer gets the children out safely, not letting them witness any of the violence that is about to happen. He also ensures that the children receive scholarships for education.

After the children are dealt with, Freelancer confronts the party attendees. He does not kill anyone. Rather, he gives them application forms for a job opportunity at a global charity and fundraising committee to prevent human trafficking.  The application process is rigorous as the party attendees shed blood and tears to get the job. Mr. Baal performs the best out of all, but Freelancer does not give him the position. This is a perfect example of what happens in the real world. People who work extremely hard don’t get what they deserve whereas the upper class have access to opportunities only because of their inherited wealth. It’s highly satisfying to see Mr. Baal in the shoes of the working class. Renato broadcasts the torture to Mr. Baal’s connections, because the biggest fear of a wealthy man is not threats or legal actions: it’s humiliation.

READ: Find out why Image Comics is a top publisher!

RENATO JONES: THE ONE% is about revenge and restitution, but it’s also a love story. Renato’s love for his neighbor and childhood friend Bliss is one-sided, as she is dating D.B. In the third issue, Renato’s trainer and guardian Mr. Church warns Renato that Bliss is distracting him and that he needs to focus on the list of the criminals he needs to take down. Renato’s digression in the purpose of his life leads to an unexpected twist: a mysterious new super villain emerges. His name is unknown, but he wears a costume that says “WA,” and he calls himself a dick. 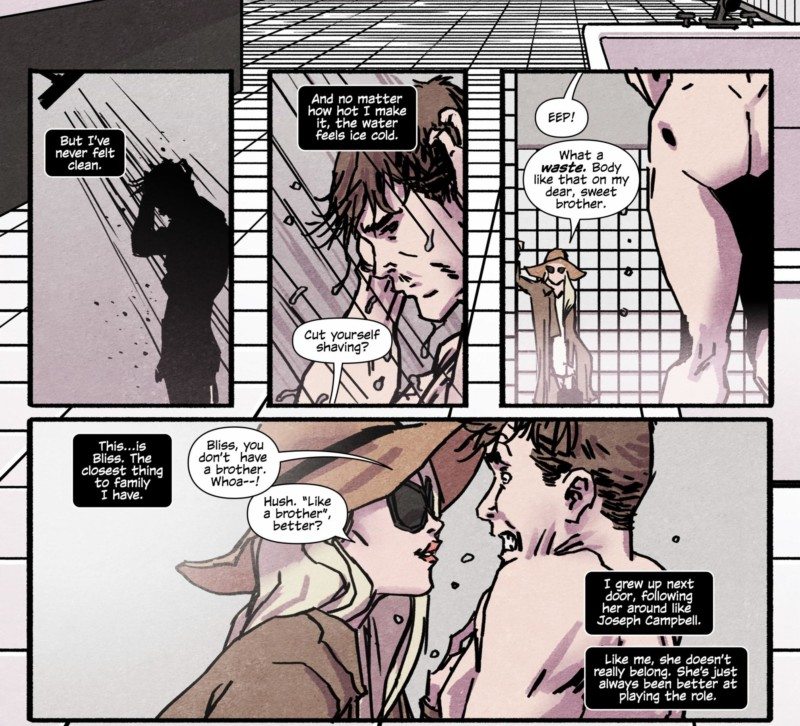 The fourth issue provides more details about Renato and Bliss’s friendship. Bliss tells Renato that she is an adopted child of a billionaire named Nicola Chambers, who physically abused her when she was a child. A scene of flashback shows little Bliss and Renato making a failed attempt to escape from their so-called home. What caused them to bond in the first place is the fact that they both didn’t belong and should wear a mask 24/7 to blend into the luxurious life. Bliss has been playful and flirtatious with Renato since childhood, but Renato does not take that as a sign of romantic interest. He knows very well that Bliss regards their relationship as platonic.

My favorite part of this issue is Nicola’s presidential campaign. He is preaching hate in his campaign speech while standing next to his beautiful daughter. “Make America Hate Again” is his campaign message, and he explains how hate has helped America win in the past with examples of the Nazis and the Soviet Union. He believes that his strong hatred for pressing issues such as inadequate jobs, terrorism disrupting peace, and rapists threatening the lives of women makes him a strong candidate (Ahem! Sounds familiar?). At the end of the speech, WA, whose official name is still unknown, is in the audience. It is evident that danger is around the corner when he says that Nicola is going to hate what’s about to happen next. Meanwhile, Renato is on a plane to China to take down the next evil billionaire on his list. 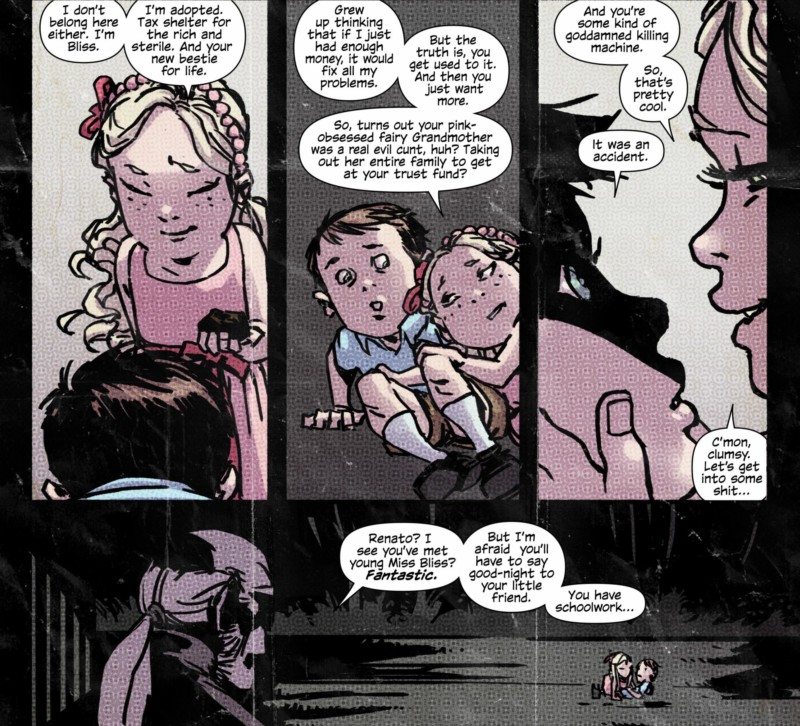 I saved the best for the last. RENATO JONES: THE ONE% #5 has the most spectacular plot. Renato arrives at China and runs into a man named Shaun who owns a company named PLUM that manufactures phones, pads and watches. PLUM products are manufactured in China and the working conditions are extremely terrible. It took me a while to figure out the satirical reference until I took a closer look at Shaun and realized that he looks a lot like Steve Jobs. Shaun is receiving pleasure from his female workers, whom he refers to as products, when suddenly Freelancer appears to bring justice.

It’s not a happy ending, however. Back at Nicola’s campaign, Bliss texts Renato and is about to confess her feelings for him. When she is close to hitting the send button, her father interrupts, telling her that it’s time to join him on stage. The unidentified WA turns out to be a terrorist: he attacks the building where the presidential campaign is happening. Do Bliss and her dad survive? What does Renato do? Who is WA anyway? The season finale has a solid cliffhanger.