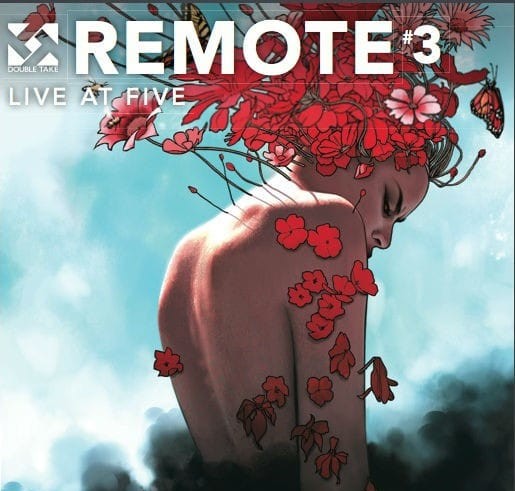 Double Take strikes back with their 3rd round of comics, released as part of a 10-comic bundle titled GENESIS III.  GENESIS I and II have introduced us to the universe that Double Take is using, that of “THE NIGHT OF THE LIVING DEAD,” but round 3 is where the Double Take team really starts to have some fun.

READ: Our full review of REMOTE #2!

Of course, I would strongly recommend reading all 10 issues in the third superpack (and it wouldn’t hurt to start from the beginning; the first and second superpacks are available on Double Take’s website for free!), but if you can’t read all 10, then there’s a bit of a struggle to determine which title best stands alone.  There’s Z-MEN, of course, which has so far stood pretty well as its own title.  However, if you’re looking for something new, something novel, something that you probably haven’t seen before, then REMOTE is the title for you.

Focusing on a young woman who is alone in a radio station, we’ve watched her struggle to fight and survive, we’ve seen her deliver the news updates (which appear in other comics in the series), but issue #3 shows us Samantha, our host, at her finest.  The way the ghouls are used in this book is what really separates it from the rest of Double Take’s flock, however, and really starts to spell out for us a major theme of Double Take’s universe: the metaphorical identity of these ghouls.

In many of their issue #3s (though notably absent from REMOTE #3), Double Take dedicates a page to pointing out the difference between life in the 60’s and the 2010’s.  Things like average body weight, obesity rates, and consumption trends are examined.  This is really what made things click for me, but REMOTE #3 is a perfect example to use as proof of this idea.

Examining some basic characteristics of the ghouls, the comparison becomes very obvious.

The ghouls are mindless consumers in every sense.  They have no instinct but to consume.  This is somewhat different from the zombies we’ve traditionally seen, who care only for the taste of human flesh.  These zombies will eat anything and everything, which, of course, includes human flesh, but this isn’t their first choice.  We have seen a number of zombies eating candy, cereal, and essentially raiding George’s store in DEDICATION.

The chart that Double Take provides proves the increase in American consumption over the course of the last 50-60 years, but it’s important to note that our consumption is not simply of food.  We, as Americans, live in an economic system that only works when people are making purchases.  We have become mindless consumers of food, yes, but also of entertainment.  We want more movies, more videogames, more television, more sports, more sex, more drugs.  We literally cannot feed our urges, and in a capitalist society, we’re told that this is a good thing because money is moving and feeding the machine.  The reality is that a few people reap the benefits ultimately, collecting what the rest of us are working for.  We can already see this starting to shape up with Mr. Grubler and the few other intelligent humans left that aren’t involved in the hospital’s quarantine. 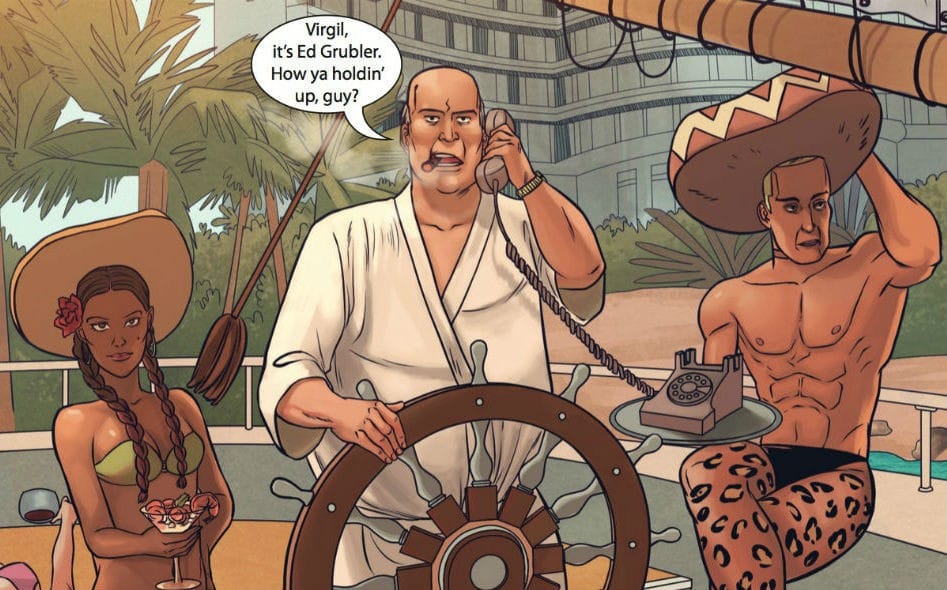 These ghouls are also very sexual beings.  We’ve seen a few different ghouls: the mindless consumers and the intelligent calculated planners.  While the mindless ghouls haven’t shown much of an interest in sex, the intelligent ghouls (or so I’m led to assume they are) are often transmitting the ghoul virus to one another via oral or sexual contact.  We also see quite a bit of drug use in various titles in the Double Take line.  Quite frankly, the characters are very promiscuous, and REMOTE showcases this in some subtle ways.

Focusing a bit more on the entertainment aspect of things, the parallel becomes much more obvious.  We see that Samantha has great control over the ghouls; they are not aggressive, violent creatures.  They are easily manipulated into doing what Samantha wants them to do; at least, they are once she figures out what they want.  Figure out what people want and use that to get people to react the way you want them to.  That’s media manipulation at its most basic.  In this case, Samantha is able to manipulate the ghouls into creating a version of “The Dating Game,” (a show which would have been a few months into its first season by the time of this issue, April 25, 1966). Samantha makes jokes and even cues audience laughter and sound effects from other ghouls.  We saw before how independent Samantha is; now we see how creative she is. She ensures cooperation from the ghouls by feeding them candy.  These ghouls are driven by hunger, their minds reduced to only being able to repeat a few words. 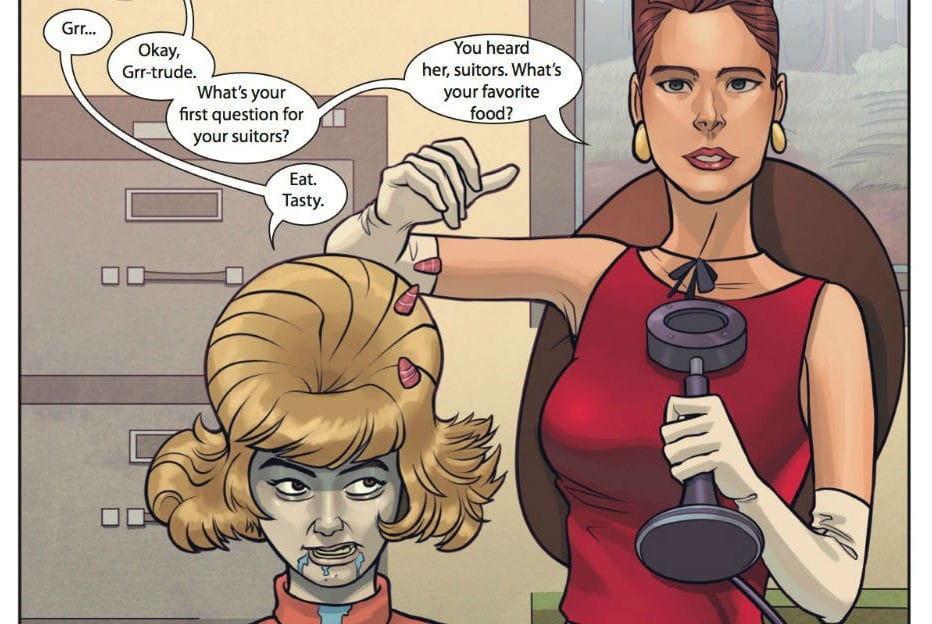 If it seems like a bitter and cynical look at humanity as a whole, well, it is, but the conclusion is understandable.  The rampant consumerism that pervades television, sports, food, and, indeed, all facets of our lives has led to a society that, by and large, is fatter, dumber, and less independent than ever before.  We rely on technology so hard that few of us could live without it.  We eat food that’s terrible for us with no regard to its nutritional value.  We have more sex and use more drugs with less fear of consequences.  We are, for all intents and purposes, mindless consumers, not thinking about why we want the things we do, but instead just following an instinct to consume.  These same ideas that enslave the ghouls to Samantha (the promise of food) are the same ideas that enslave us to a system that feeds off of us (the promise of money so we can consume more).  I’m getting a bit more political than I want to, here, but there it is.  They are us.  Their world is our world.

That’s what is most fascinating to me about this issue.  It is a great demonstration of where this series is going.  Soon enough, Double Take will be exploring the future of their world (which would align with what is the present to us).  I’m willing to bet it’s a world that is not too different from our own. 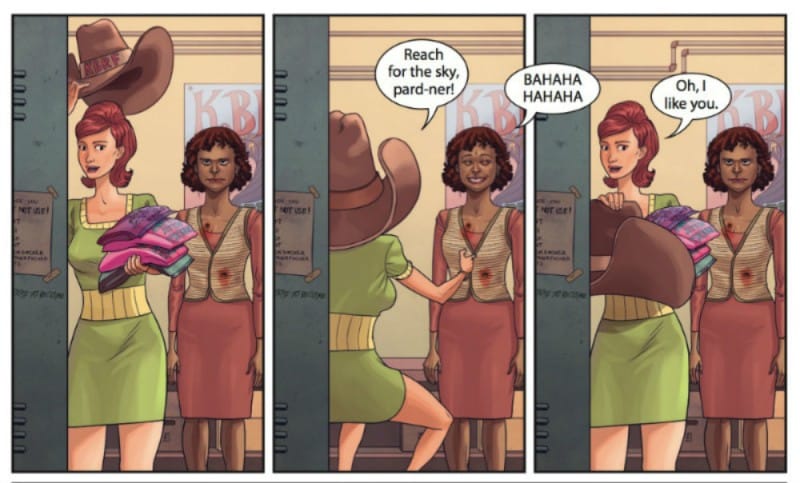 On the writing end of things, the book does a great job of showing us something new, which was the highlight for me.  Using zombies as a laugh-track is something that I personally have never seen before.  It also adds a little more information about Samantha and certainly shows her to be more empowered than one might have guessed in issue 1.  Does the issue stand alone?  Not perfectly, but certainly better than other titles in Double take’s universe.

The biggest issue with the writing is that, out of nowhere, Samantha’s manager starts right off in the middle of the story he’d begun telling in previous issues.  Reading the issues back-to-back, this isn’t a problem.  However, when there’s a few months in between releases, it isn’t always easy to remember that a story was being told (or which story was being told) by the time the next issue comes out.  A quick line of dialogue, like “Now, what was I talking about?” “That time you went ice skating…” could have worked perfectly, particularly because he begins to continue his story after a series of phone calls.  It may seem nitpicky, but the story otherwise seems to come out of nowhere, which is a bit jarring to the reader.

As far as the art goes, REMOTE #3 looks way better than either of the first 2 issues.  It’s really remarkable how much of an improvement has been made since issue #1.  What used to have a very coloring-book feeling has upgraded to a style that’s a bit more akin to ARCHER: bold lines and heavy colors that stand out on colorful backgrounds.  It’s s hard to do the quality of the art justice, but it’s refreshing to see the development.  As always, I had to appreciate the little hidden gems and details left behind by the artist, particularly the graffiti that spells out “I am what I choose to become.” Combined with the theory that we are an evolution of these ghouls, this is a particularly haunting piece of graffiti.  We are also treated to E=MC^2 and seven words that Samantha cannot use, for any George Carlin fans.

READ: Our review of Z-MEN #3, soon to be a movie from Lionsgate!

This is not a perfect book, but it is nonetheless a lot of fun.  It stands on its own better than most of the other titles, though first time readers may feel a little confused.  However, this is a title where I feel that Double Take has begun to really add meaning and value beyond entertainment.  This is a title on which they are not afraid to experiment, take risks, and try new things.  For that alone, REMOTE #3 should be on any zombie fan’s reading list.