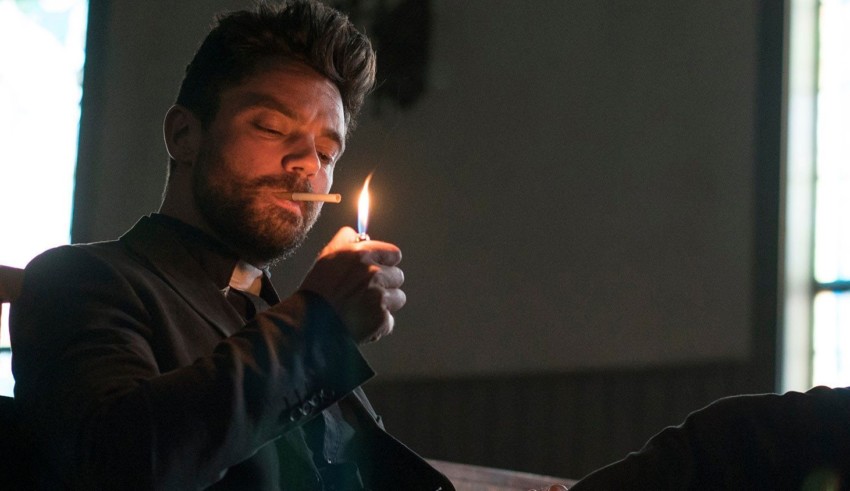 Traditionally, television doesn’t have many types of religious characters, and the priests & pastors we do get usually aren’t the protagonists. They tend to be two-dimensional archetypes— either a morally upstanding father figure or a vindictive jerk who uses their beliefs to attack others.  However, lately we’re seeing new types of leading religious figures, and in particular, the shows OUTCAST and PREACHER give us two new portrayals of holy men. These leading characters are intensely interesting, as they break previous stereotypes, and their intrigue stems largely from their cynicism regarding their religious professions.

One emerging example of this new brand of religious characters is Jesse Custer, the titular preacher in PREACHER. Jesse was originally a criminal with a very religious preacher for a father. While it’s not entirely clear in the show why Jesse leaves that life behind, Jesse quits crime and takes over his father’s old church. Early on in the series, he gets mind control powers from a strange mystical space creature, which essentially allows him to give people commands that they must obey. When Jesse first gets the power, he assumes that it has come from God; however, he is then told by two angels that the power is actually a dark and evil being. Despite learning this information, Jesse decides to continue using it, and ignore everyone telling him he’s wrong.

There are many instances of Jesse’s cynicism throughout PREACHER. For one, Jesse has an unusual friendship with Cassidy, a drug-loving vampire. Jesse’s religious background leads him to kick out Cassidy for being a vampire, yet he has no problem with the drugs. Jesse, despite being a man of God, is even skeptical of the two angels who come down to talk about his powers. When Jesse is using his powers, he knows his actions aren’t wholly holy. Jesse fully believes getting his powers is a sign from God that their desires are the same. So while Jesse may be trying to convert evil businessmen, he’s still punching the ever-loving hell out of jerks at the bar. Despite being in a profession all about kindness and forgiveness, Jesse is just as jaded and irritable as any television antihero.

One of the strongest elements of PREACHER is Jesse’s relationship with Arseface. Despite his horrifying physical disfigurement, Arseface is far from grief-stricken or bitter. On the contrary, he’s the positive, faithful person we would expect Jesse to be. It is often Arseface’s naive optimism that keeps Jesse in check and on the straight moral path. While Jesse wants the world to forgive and love Arseface, he turns on Arseface the moment he accuses Jesse of misusing his powers. Jesse can’t bear the purity of Arseface’s heart comparative to his own, so he flings Arseface’s own sins in his face. That’s why, when Jesse accidentally sends Arseface to Hell during an argument, Jesse refuses to bring him back. Jesse and Arseface both have a dark past—Jesse’s criminal record and Arseface’s gun-face incident— but only Arseface comes out of his suffering as an optimist.

READ: How does PREACHER create a distinction between faith and organized religion? Read more into this idea here!

Jesse’s cynicism is what makes him an interesting character. As a religious leader, you’d expect him to be a very moral, upstanding guy. However, his view on religion is very self-serving, as evidenced by his powers. He believes that his power came from God, but he uses them at his own discretion. Jesse uses his powers the way normal people might, as opposed to what you’d expect from a pious servant of the Lord. Jesse is like Killgrave from JESSICA JONES, only with a better ethical code. Jesse isn’t quite an angel or a demon (much like the power inside of him). His grizzled past as a criminal, coupled with his perceived higher calling, creates a morally nuanced character. Jesse isn’t a standard television priest, but the cynical lens he sees his world through creates a more interesting character.

An interesting twist on the cynical religious ruler is Reverend Anderson in OUTCAST. He doesn’t seem to have the same storied criminal past as Jesse. However, in the series, Anderson is fighting a losing battle against the demons possessing townspeople. He has become a gambling, drinking, angry pastor, made cynical by the horrors he has seen. Through his partnership with Kyle Barnes, the show’s protagonist and “outcast”, we also learn that Anderson’s wife and son left him. There’s a terribly sad scene where Anderson loses the last picture he has of his son. He’s screaming in the rain, looking for it, and is faced with his own uselessness in the fight against evil. Reverend Anderson has been put through the religious wringer, and never seems to get a win. Anderson isn’t as grizzled as Jesse may be, but his view on faith and people seems just as cynical.

Much like Jesse’s relationship with Arseface, Anderson’s relationship with Kyle fuels his own inner turmoil. Kyle Barnes, who’s dealt with several possessed loved ones, has the ability to literally beat the demons out of people. When Kyle teams up with Anderson, Kyle reveals that many of the folks Anderson has “saved” haven’t actually been freed from possession. This creates a stark comparison between the two, as Anderson is the more pious of the two, but therefore the least effective. Anderson is not the most pious man in the world, but he cares far more for the townsfolk than Kyle. Alas, these desires to save everyone become moot compared to Kyle’s raw power. Though Anderson is aware of his vanity about his “good work,” as well as Kyle’s abilities, it consistently crushes him that his struggle seems to be for nothing, thus adding to his cynicism.

READ: How is religion explored in HBO’s hit series GAME OF THRONES? Read more about it here!

Both Jesse and Anderson have a significant personal stake in their work. So when they are confronted by those who challenge their views, they both lash out. While Jesse’s faith is affirmed by the existence of angels and demons, his love for his powers blinds him to being fully moral. Anderson is able to use Kyle to destroy the demons, but Kyle regularly mocks Anderson for his faith and inability to help. And what makes both so cynical and tragic is how necessary they both are, in their own minds. Anderson is the one who gets Kyle involved in killing demons, and Jesse is the only one who can make the bad folks act properly. This balance of a fueled ego, the abilities they do have, and constantly being reminded of what their flaws are, makes these characters enthralling and interesting.

What do these two characters tell us about religious figures in television? Are they only appealing when they break the stereotypical view of faith? Both Jesse and Anderson have a strong belief in God, but it’s not in the way that we usually see. The cynicism that defines both characters works because the two become semi-stereotypical anti-heroes. They’re interesting because they’re good people, but not too good. Their faith makes them the heroes we can root for, but their less holy actions make them relatable. The cynicism humanizes the characters, making them engaging, as opposed to underdeveloped stereotypes of religion.

But not every engaging, religious character needs this cynicism to be three-dimensional. For a point of contrast, there is Mr. Eko, the priest on LOST. Like Jesse, Eko becomes a priest after a career of crime. This decision stems from the death of Eko’s priest brother, who died because of Eko’s crooked dealings. When Eko crashes onto the island, however, you would never expect such a darkness lying within him. Mr. Eko is a kind-hearted, faithful man, giving the islanders a strong moral compass to rally behind. While Jesse’s criminal past informs his actions, Mr. Eko tries his best to turn his back on them. The reason Mr. Eko still works as a character is because his character is still informed by that cynical past life. Like Jesse and Anderson, Eko is fleshed out through his less-than-godly ways that set him on his path in the series.

The cynical look at religion helps make for more interesting television characters. It is by no means the only way of doing so, but has produced several successful results. We get characters who are not obnoxiously holier-than-thou, but are instead more human. The new view of faith presented to us in these shows is cynical, but it makes for better television. If good, wholesome faith is what you’re seeking, you can watch either GOD’S NOT DEAD film. But shows like OUTCAST and PREACHER know how to harness the heads of the church, and provide better, more relatable narratives around them.