By tapping into the heart and core of what makes Regular Show so spectacularly regular, REGULAR SHOW #40 finishes off the three-year ongoing series with a certain triumphant poignancy. This issue contains both the final part to the “Apocalypse Benson” storyline as well as a smaller, one-off comic which also focuses on our favorite explosively angry gumball machine.

READ: What does STEVEN UNIVERSE tell us about good, bad and all the messy in-between? Find out!

“Apocalypse Benson” is the type of story that could be seamlessly folded into the show’s list of episodes and the conclusion in this issue reiterates this. After the Oracle of Chaos has convinced Benson to retire, The Park has gone to, well, chaos. In true Regular Show fashion, Mordecai and Rigby realize just how badly they’ve screwed up and go to drag Benson out of retirement. In a face-off of ridiculous proportions, Benson must battle the Oracle of Chaos in a “Manager’s Duel” for the fate of the world. Just like the show, this comic has excelled at adorning the mundane or “regular” in a series of convoluted and ridiculous trappings that give the show its distinctive flair for melodrama. Everything feels random and entirely insane, but all these wing-nuts and creative doo-hickeys orbit around very ordinary human concepts of loyalty and the power of friendship. The success of this issue is a true testament to the dedication of the creative team led by Mad Rupert and Laura Howell who understand these fundamental ingredients that make Regular Show function as effectively as it does. 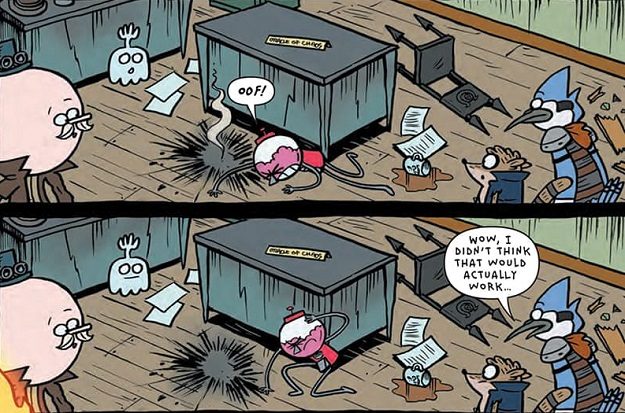 There’s hilarity, there’s heart, and some great art that riffs strongly on the show while still having its own comic flair. Speaking of the art, it’s worth noting that where other television-adapted comics fall into the trap of trying to chase the show’s distinctive style, REGULAR SHOW does not. It’s clear here that Howell understands what stylistically works on television versus what works on the page. In the places where the show’s layered animation style would be utilized, Howell employs some art tricks that work better in comics. For instance, rather than chase the simplicity of the show’s art, Howell takes that as a base and adds her own takes that makes the work pop on the page. The use of harsh, black outlines, and her panel-work is to be particularly lauded as it sets the frenetic pace and energy for the issue.

READ: Did you know ComicsVerse has its own webcomics? Check them out here.

After “Apocalypse Benson” came a small comic titled, “On The Hook” by Christine Larsen. Benson is going fishing to relax and is whisked away on a brief, but fruitful viking adventure that manages to keep in touch with the wackiness of the show. This mini comic does away with any attempt at resembling the TV show. Instead, Larsen takes this as an opportunity to riff on the show’s style and showcase the capability of the material to work in other art styles. It has a more modern, hand-drawn feel to it. Compared to “Apocalypse Benson”, “On The Hook” feels as though it had less creative restriction and did not try to squarely fit into the TV canon. It could, but this feels like something JG Quintel and crew had in their daydreams and never put into the show. Both approaches to the Regular Show comic work and that’s what makes it exciting to see them both together in the same issue. 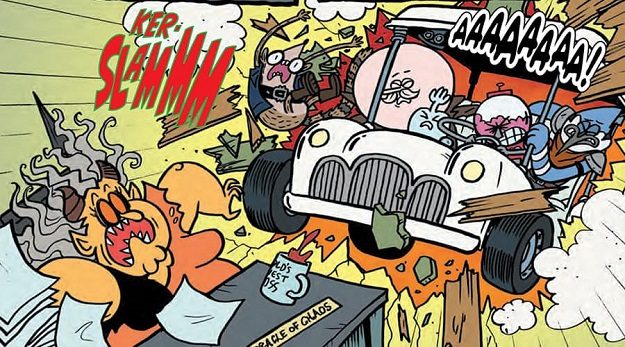 If there was to be a gripe, it would only be in the formatting of this book. The way REGULAR SHOW #40 reads, it seems as though “On the Hook” should have been placed before “Apocalypse Benson” as the latter had a greater sense of finality to the series. This is only a minor issue, though, and hardly affects the reading experience.

If there is to be a thing to remember from REGULAR SHOW it is that it excelled at telling stories that not only emulated its TV show parent, but expanded on its storytelling potential in the comics medium. Both “Apocalypse Benson” and “On The Hook” are shining examples of the masterful brand of simplicity that makes REGULAR SHOW so unique. This is surely a series to be missed.