Hitting comics stores on the 10th of May, REGRESSION #1 is a new Image horror series in the first of (hopefully) many collaborations with writer Cullen Bunn (HARROW COUNTY, THE DAMNED, THE EMPTY MAN) artist Danny Luckert ( HAUNTED, TETHERED) and colorist Marie Enger (PISTOLWHIP, WE ARE IN A DARK PLACE). REGRESSION #1 delves into human memory, asking questions that could well end in tears…and blood.

ComicsVerse: Can you tell us what REGRESSION is about?

CULLEN BUNN: REGRESSION is the story of Adrian, an everyday guy who is plagued by horrible walking nightmares. As these nightmares get progressively worse, he consents to undergoing hypnosis. During the session, a past life regression is conducted. And then things get really, really awful. Because during the past life Adrian visits, something ghastly occurs. Worse, something follows him back to the present.

DANNY LUCKERT: No person can escape the mistakes of their past, even if that past person wasn’t even you.

CV: I believe this is your first series with Image. How did the three of you get involved with REGRESSION and Image?

CB: I’ve been talking to Image for a few years about doing something, and I have a few projects in the works for them. I’ve just been waiting for the right time to strike, I guess. I’m thrilled that REGRESSION (which is a story I’ve wanted to tell for years) is my introduction to the world of Image Comics.

DL:  I got involved with REGRESSION kind of by luck. Not too long ago I illustrated a graphic novel called TETHERED with this writer David Precht, and it was through him that I met Cullen. Cullen had a really cool idea for a book (REGRESSION) and asked if I would be interested in working together. I jumped at the chance, and here we are.

MARIE ENGER: It’s been a while, but I’m pretty sure I did a few test pages for REGRESSION, waited a few months, forgot about doing the tests, and got an e-mail with a bunch of pages and the go ahead to go nuts. Hard to turn down coloring Danny’s art and Cullen’s words, especially when the carrot of getting the Image Comics experience is dangled in front of you. 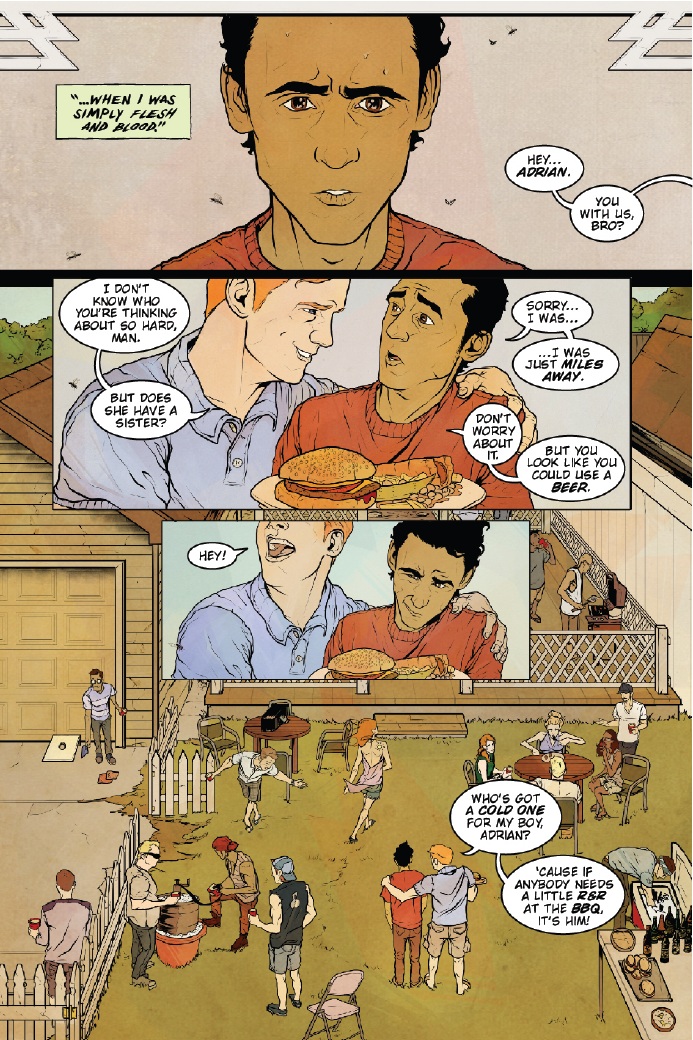 CV: How long has Adrian being having these hallucinations? It feels like they have only recently begun.

CB: I think they’ve been really, really bad for only a few months. He might have had little glimpses throughout his life, but the intensity of the visions has been ramping up of late.

CV: Despite his protestations that he doesn’t know what’s happening is Adrian just in denial? The man who appears at his bed during one of his more vivid hallucinations suggests he is.

CB: I think that’s a great question and a key to this story. One of the things that I’ve always been fascinated with about past life regression is the idea that all these lives you’ve lived are still there in your head, but they are kind of partitioned off, waiting to be accessed. Of course, to access these lives could drive you mad. In this book, we play a lot with what is real and what is not, what is the truth and what is a lie, and what we hide… even from ourselves.

DL: I don’t know if I would say he’s in denial when we first meet Adrian. I think he is genuinely confused and scared about the situation that he’s found himself in. This whole thing may just be a bit over his head.

READ: Curious about other series from Image Comics? Check out our review of ROCK CANDY MOUNTAIN #1!

CV: Danny, there are some stomach-churning images in REGRESSION#1. How far do you push the envelope on the horror element?

DL: I’ll take that “stomach churning” comment as a compliment! Most of what you see is what Cullen has written so a lot of the envelope pushing is to his credit. I’m sure your readers are well aware, Cullen can write some creepy stuff. As far as my contributions are concerned though I’ve tried to stay away from what I see as “traditional” horror element. Meaning I don’t use a lot of heavy black and shadows, and everything is in full view for the reader. And yeah, sometimes that full view involves more than a little GORE.

CV: Marie, for me what stood out in terms of color, was the use of green, giving the comic a queasy, sickly feel. How important is it to get the colors right to set the mood of the story?

ME: Oh man…Incredibly important. Especially here, in a comic where you’re not quite sure what’s real and what isn’t. The shift from a natural palette to a very, very unnatural one is an important key. I like to think those natural colors give the readers a little scrap of reality they can grab onto before we yank it away.

CV: Cullen, your father was a professional hypnotist. How much of that did you draw from while researching for REGRESSION?

CB: It’s safe to say this book wouldn’t exist if my dad hadn’t been a hypnotist. I drew a great deal of inspiration from watching his performances. That first-hand experience was the bulk of my research into hypnosis and past life regression. I did a little more, but not much.

CV: What do you think makes an effective horror comic? And what are the challenges in creating one?

CB: In a horror comic, you don’t get “jump scares” to startle the reader. Instead, you have to rely on building an atmosphere of dread. One of the ways to do that is to make the reader really care about (or at least relate to) the characters. If the characters are real, the reader will care about what happens to them and be afraid for them.

DL: I personally find that the more personal works are the most effective. By that I mean, works that focus more on the characters as opposed to all the blood and guts that are sure to surround them. When you can really empathize with them. Because once you’ve reached that point, it’s easier to see yourself in their shoes, and that’s when the real fear beings. And the challenge in creating an effective horror comic is to create one that’s NEW. I guess that applies to any genre though.

ME: Ditto Cullen. The atmosphere…and that slow build of dread. 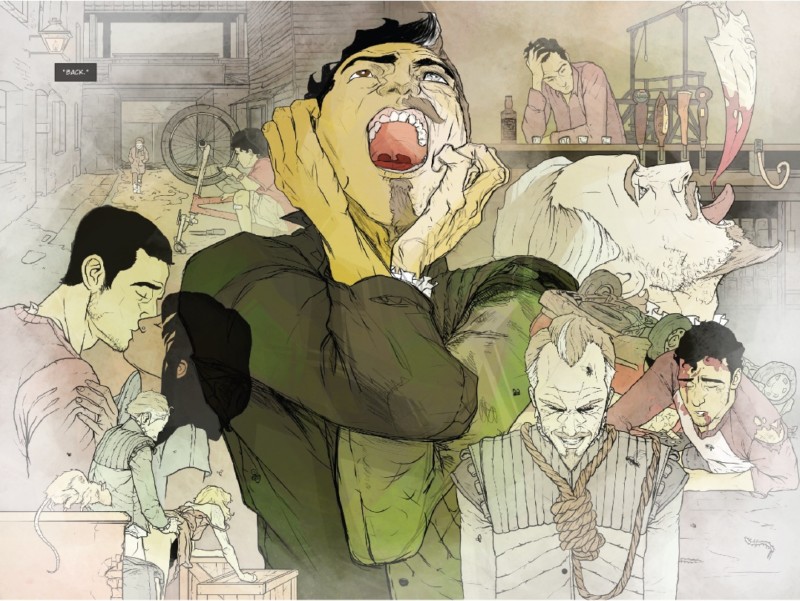 CV: Would any of you undergo regression therapy, given the opportunity?

CB: I’m curious, to be sure, but I don’t think so. I’m way, way too afraid of what I might find out.

DL: Hell yea! Whats the worst that can happen.

ME: Not anymore! I like to think that I’d be a blank slate, that I’m the only me there’s been, but…I’m sure Adrian felt that way too.

READ: Jason Latour and Ivan Brandon, writers of BLACK CLOUD join us for an interview about the new series!

CV: Before we finish up, are there any upcoming projects you’d like to mention to your fans?

CB: I’m always working on a lot of projects. In addition to REGRESSION, I’m writing THE DAMNED for Oni Press. THE DAMNED was my introduction to professional comics over 10 years ago. Brian Hurtt and I are returning to that series as an ongoing book. A trade paperback of the original series just came out (in full color for the first time) for only $10. And a new first issue comes out soon for only $1. I think it will be a great introduction to the word of 1930s noir with demons for new readers and old!

DL: I have this books coming out in the not too distant future called RIPTIDE by Scott Chitwood and the awesome folks at RED5Comics. And as always feel free to check out TETHERED with David Precht and HAUNTED Vol 1 & 2 with Scott Chitwood.

ME: Oof – some stuff is in the pipes for me that I can’t talk about, but my past had me coloring PISTOLWHIP and 2 SISTERS, I letter FALLEN VEIL (over at Table Titans) and DEPT. H. In the very near future folks will be able to check out a comic collaboration between me and the band PUP that combines punk music with horror, and right now, people can check out my short horror comic collections, WE ARE IN A DARK PLACE, and PUNX WIN! – both of which are available online (so-engery.com) and in print format from my web store.

REGRESSION #1 terrifies comics shelves from the 10th of April. If you want to keep up with the creative team’s work follow them on Twitter @cullenbunn, dannyluckert.com, and @so_energy.