A new comic by Cullen Bunn, Danny Luckert, and Marie Enger creeps onto the horror comic stage: REGRESSION #1. This is an exclusive review of the first issue, which is completely heart-racing. We’ve seen so many facets of the horror genre, from gore to psychological thriller to paranormal activity. Effortlessly, this comic manages to pull from all these different angles and bring you an uncomfortable, satisfyingly scary ride. 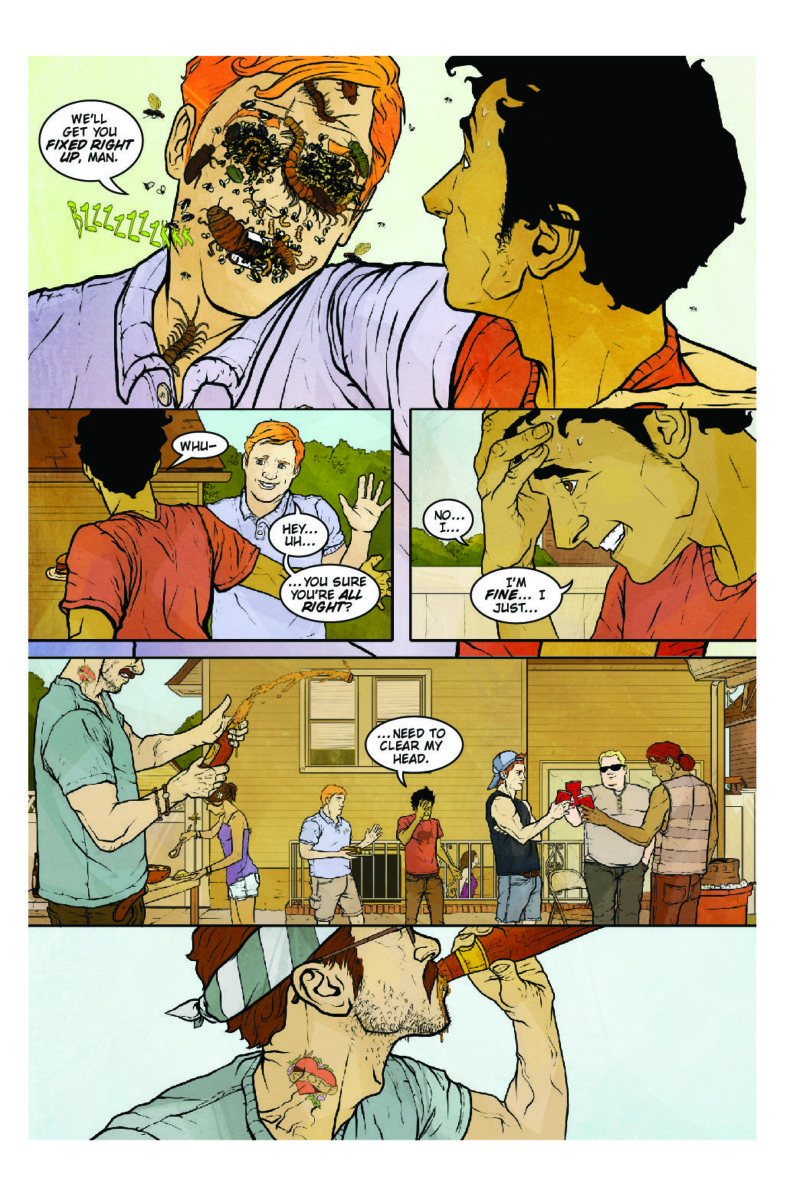 The Story That Pulls You In

REGRESSION #1 follows the story of Adrian, a sympathetic character plagued with disturbing hallucinations and nightmares. They often involve startling visions of insects, blood, or gore. Unfortunately, they leak into his daily life more and more, including at a friend’s barbecue. So Adrian’s desperate. His friend suggests a performance artist hypnotist as a bleak last option. There, the hypnotist delves into Adrian’s mind through past-life regression, hence the title. From then on, things only get worse.

READ: Does this sound interesting? Read the interview we did with the creators!

Though it was only the first issue, I already feel for Adrian. We see him struggle to do simple tasks, like talk to friends at a social gathering. He’s truly being haunted (no pun intended) by some disturbing force, and from the first page, we see the toll it’s taking on him. The first issue reveals Adrian enough so that we connect, yet leaves a lot missing so that we want more.  I definitely do. I want to delve into Adrian’s life — his backstory, his family, and his love life if any there is one. From Cullen Bunn’s previous writing work such as HARROW COUNTY, I know he has an ability to create three-dimensional, realistic characters. I can’t wait to see what he does with Adrian as the series goes on.

READ: Like horror comics? Check out our list of comics almost as scary as the Trump presidency!

Regarding the art, it at first may seem like standard comic book art. At least, truthfully, that’s what I thought. However, on second reading, I noticed the subtle and effective uses of color throughout. When Adrian is immersed in reality, the colors are neutral, bland even. Yet when his hallucinations start to creep in, the colors morph into sickly greens, yellows, pus-like browns, etc. The artists — Marie Enger and Danny Luckert — effectively create an atmosphere of unease and unrest, following Adrian wherever he goes. It’s an amazing use of covert artistic skills to convey what needs to be conveyed.

What Makes REGRESSION #1 So Effective

The horror genre is only truly scary when it seeps into reality. Look at movies like THE BLAIR WITCH PROJECT or the extremely prevalent trope of a family moving into a new house and finding out it’s haunted. It’s the plausibility that makes audiences rush to the theaters to see these. These works, REGRESSION included, call upon the lingering feeling in the back of your mind when you catch a glimpse of a menacing shadow at night. When the door creaks open even though no one is home. When, in this case, you can’t decipher what is real and what isn’t. 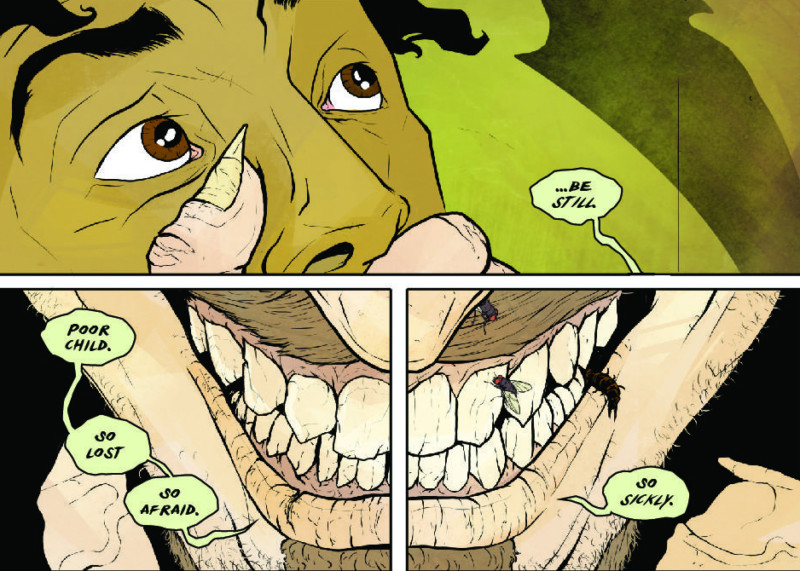 Some recent media, such as M. Night Shyamalan’s thriller film SPLIT, perpetuates the idea of mentally ill people being violent and scary. But Adrian, the main character — he isn’t scary. Rather, what’s happening to him is. Though we don’t know for sure that the cause is mental illness yet, what’s afflicting him is something that too many of us have faced and can relate to: losing control. The true horror in this comic is not the insects crawling out of a rib cage (though that does make you want to squeeze your eyes shut). It’s the feeling of not being able to differentiate between what’s real and what’s not. In subtle ways, it almost pulls together the gap between us and them when we’re talking about mental illness. This comic affirms that anyone can lose control, and who knows — it might be you next.

The most telling sign about REGRESSION is that after I finished reading, I immediately wanted more. It makes for a great comic, but especially a great first issue. Even as I’m writing now, I’m thinking about where the story will go. The potential that this comic holds is massive. It has the ability to move past stereotypical horror (though I’d say it already has) and explore a realm of spirituality, the supernatural, and what reality means at all. Check out REGRESSION #1 when it comes out May 10th!