REDNECK is the story of The Bowmans, a Sulfur Springs family living on the edges of town, quietly minding their local barbecue joint. Their vampirism is something of a family secret. The family has survived on the blood of the cattle they use for their barbecues, with some members enjoying a paint-thinner cow blood cocktail on occasion. REDNECK #1 marks the beginning and the end of their life of solitude, for the worse.

REDNECK #1 strikingly seems like the AMERICAN VAMPIRE and SOUTHERN BASTARDS comic book lovechild we didn’t know we wanted. All three series are phenomenally unique in their own rights, but REDNECK contributes to possibly one of the greatest horror trends that have been revitalized in the comic book industry today – that is, gritty southern monster stories.

Donny Cates seems to favor supernatural stories in the south. GOD COUNTRY, his other successful ongoing Image series, follows an old sword-wielding widower battling creatures through Texas. Cates himself is a native of the Lone Star state, which explains his respect for and dedication to writing about it.

The south, more specifically Texas, is the perfect setting for this story. The Bowmans have been pushed to the edges of society in an attempt to survive. Texas, the second largest state in America, is incredibly vast with some Texan cities closer to neighboring states than each other. Cates has described his childhood experience of East Texas and Suplhur Springs to have been scary, overgrown and isolated in comparison to his northwestern Texan upbringing.

Religion plays a big role in Cates’ stories, likely because religion is a large part of the American South’s history and culture. Cates opens his GOD COUNTRY #1 with a phenomenal Cormac McCarthy quote on the wrath of God. It is significant then, that REDNECK #1 opens on Christmas Eve. Cates introduces this theme of the existence of both God and vampires, the antithesis of holiness, through the Bowman-Landry rivalry. Bartlett, our narrator, and the Bowman uncle, faces Father Landry while trying to extract the Bowman boys from a fight at the local gentleman’s club (read: ‘titty joint,’ to quote JV Bowman). 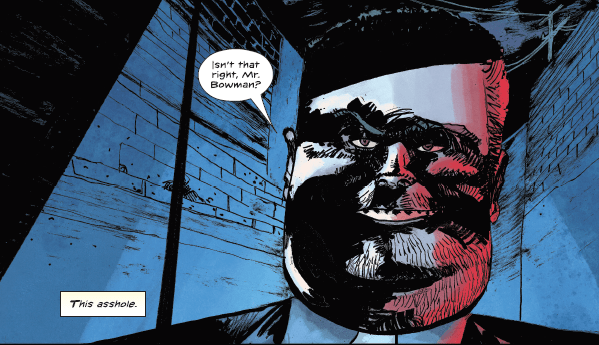 The Landrys have long since known of the existence and nature of the Bowmans and both have kept more or less out of each other’s ways. However, the standing Father Landry seems very interested in provoking change. A bloodied confrontation between Landry and Bowman ends in the tragically symbolic demise of a Bowman family member and concludes the first issue of the REDNECK series. Cates deliberately does not set this up to be a fight between good and evil in his characterization of Father Landry, a stocky and menacing figure who emerges out of the shadows of the club to instigate the older Bowman.

REDNECK #1 is dark, which seems natural for a story about the survival of vampires in the expanses of the dry Texan east. The first issue only briefly touches on why the Bowman family is so concerned with survival, with patriarch JV Bowman adamant on keeping the younger Bowmans at home and away from the population of the town. JV goes as far as to threaten to throw the boys out if they kill, claiming he ‘won’t have that evil in [his] house’, an incredibly interesting choice of words for a vampire to use. This sentiment stems less from concern for the town’s safety and more from fear of an inevitable tragic blow to the Bowman clan should they be exposed. 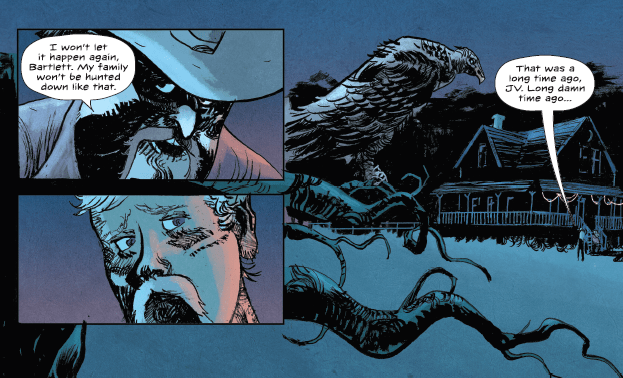 Creepin’ It In The Family

I think it’s incredibly important to note that a wonderful characteristic of the Bowman family is that they are classically vampiric. Perry, the youngest Bowman, has mind-reading abilities. JV has great strength. Granpa, who we only get a glimpse of, shares Perry’s mind-reading abilities. He is also the oldest of the Bowman clan and, though we only catch his silhouette, he looks almost authentically vampiric and bat-like, with his long, sharp features and large, glassy eyes. Barlett is later shown to be unable to withstand direct sunlight. 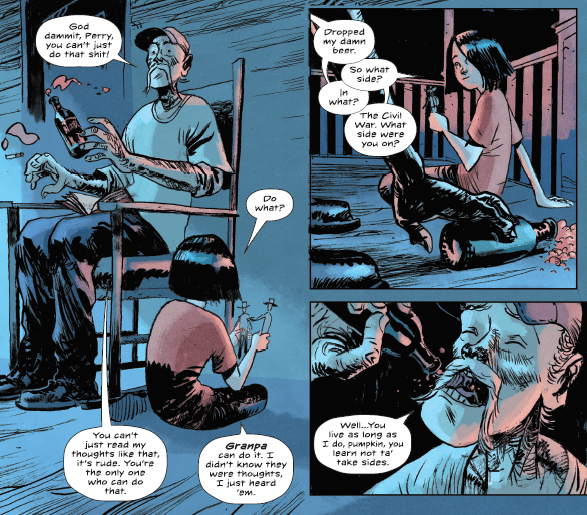 Lisandro Estherren, the series’ phenomenal artist, captures the terrifying essence of the Bowmans and the grittiness of Sulphur Springs. The Argentina-based artist has lent his talent to publications across the world including Editorial Pictus, Aurea Editoriale and Diábolo, and locally to Red5 Comics’ SPOOK and BOOM! Studios’ THE LAST CONTRACT. Estherren introduces the issue with beautiful but haunting bleeds, merging the vultures flying off of the dead tree in front of the Bowmans’ old farmhouse with the dusk sky, then placing Bartlett, in the middle of dramatically slaughtering a cow, at the foreground of the second bleed. 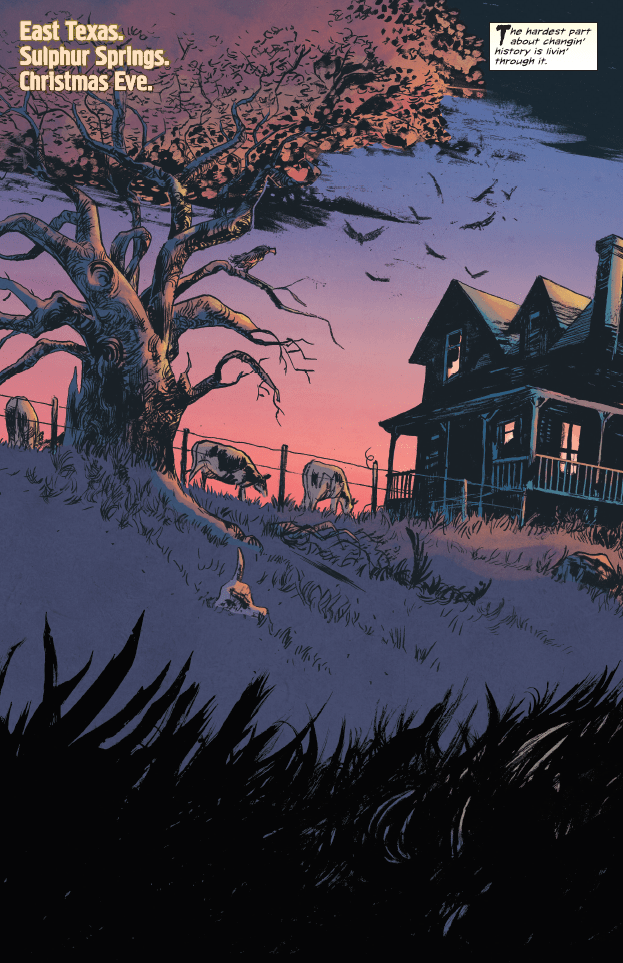 Lisandro’s doesn’t compromise in his backgrounds or character, but his focus on detail does serve to highlight danger, fear and, to paraphrase Cates, the ugliness of the characters and the town, with full panels of Barlett’s sharp fangs, Father Landry’s profile, and the skeleton of the cattle on Christmas Day. Lisandro’s linework is sharp, dark and busy, perfect for REDNECK #1.

Dee Cunniffe’s immaculate coloring captures how, literally, dark the story is. Cunniffe has showcased his incredible skills on the likes of BLACK CLOUD, THE DREGS and ODY-C. In REDNECK #1, he predominantly uses the color black with varying shades of blue and red, to capture the danger, anger, sin and build up to tragedy. Even at the break of dawn, Cunniffe is able to emphasize the Bowmans’ ignited sense of fear and exposure as opposed to a sense of calm, peace and safety often associated with light.

Being from a different but equally arid and frightening South, there’s something so raw and wonderfully terrifying about Cates’ REDNECK #1. Most of the characters encountered in REDNECK #1 are morally questionable, vampire or otherwise, and it’s refreshing to read a story of vampire survival in a human world which is already undoubtedly horrific in itself. It will be interesting to delve into the generational differences of the Bowman clan as they struggle to continue living in Sulphur Springs. Cates’ will undoubtedly continue to deliver incredible plot, a wonderful combination of the modern era meets horror meets Southern Gothic. The REDNECK team has produced a particularly devilish series that has instilled in me a newfound appreciation in the long-established creative history of the South.

REDNECK #1 is available at your local comic book store and online!