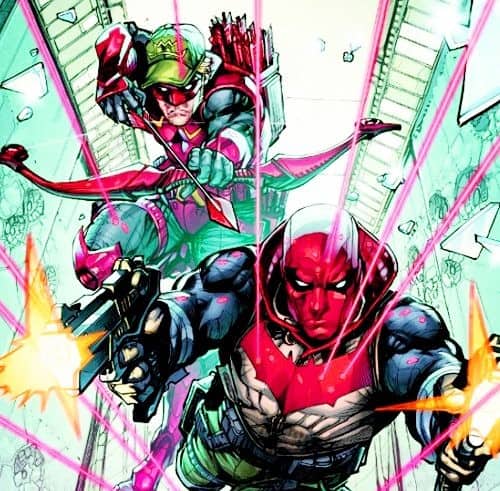 Scott Lobdell returns in this new comic book spin-off of Red Hood and the Outlaws. A lot may have changed in Red Hood/Arsenal, but the dynamic between the two anti-heroes is just as entertaining as it has always been.

Arsenal, aka Roy Harper, is attempting to be a solo hero after the Outlaws went their separate ways. His mission is to save a senator who is being held by terrorists. Tara Battleworth, a powerful Washington “fixer”, attempts to make a transaction of money for the senator’s life in the Arizona Desert. Once the terrorists turn on her, Arsenal intervenes on the matter. Watching Arsenal try, and ultimately fail, at being a solo hero is a bit disheartening. Lobdell makes it seem like Arsenal can’t succeed without the help of Red Hood, aka Jason Todd. One of the thugs Arsenal takes down couldn’t even recognize him without Red Hood by his side. When Red Hood makes an appearance, he reveals that he tracked down Arsenal expecting him to screw up and leave Red Hood to clean up his mess. After reading Red Hood and the Outlaws and seeing Arsenal get the short end of the stick for most of the series, I was hoping this comic would be different.

Catch up on Comic History by checking out our blogs

After the situation is taken care of, Jason convinces Roy to join him again and the two friends head off together. Before leaving, Battleworth gives Roy her calling card in case the two ever decide to go legit. While Roy contemplates whether or not they should become legit heroes, Jason is firmly against it. The final page of the issue shows us a flash-forward to a week later where we see Red Hood and Arsenal falling alongside the Eiffel Tower while avoiding bullets! Based off the dialogue, it can be assumed that Arsenal convinced Red Hood to go legit with him, and Red Hood has some animosity towards Arsenal because of that.

After this first issue it is obvious why the outlaws’ portion of the title was removed, Red Hood and Arsenal are not outlaws anymore. This takes away a bit of the edge that the two had had, considering they were technically criminals who did what they wanted. It should be entertaining to see Red Hood serving under some kind of authority, because aside from Batman, Red Hood doesn’t take orders very well.

Denis Medri provided the artwork for this issue, and it appears cleaner and more cut than Kenneth Rocafort’s artwork in Red Hood and the Outlaws. I need to address the costume changes, seeing as no one pointed them out in this issue. Arsenal’s suit looks the same, only with more padding and visible gear. His mask makes him look like a bird; it’s very similar to Red Robin’s eye mask in the Pre-52 universe. The difference is, for Red Robin it works, because his codename is a bird! Red Hood now wears a helmet without lips or other facial features, which I appreciate because in the final issues of the previous series, Red Hood’s helmet looked ridiculous. As for the rest of his outfit, he’s wearing a fitted long sleeve shirt with a sleeveless red hoodie and a sleeveless brown leather jacket on top. That’s too many layers of clothing, especially in the desert!

Bizarre clothing choices aside, this was an entertaining read, although nothing spectacular really captivates its audience. I feel like Lobdell is making some assumptions that people picking up this comic book have already read Red hood and the Outlaws. Scott Lobdell has done good work with these characters in the past, and I’m looking forward to seeing where he takes them now that they are no longer outlaws. It should be an interesting ride.