RED HOOD AND THE OUTLAWS #10 picks up with the Dark Trinity separated in the desert of Qurac. This enables a three-way storytelling split, creating very different stylistic and psychological explorations of Bizarro, Artemis, and Red Hood. The result is an issue that packs an emotional punch, giving us the best use of the Dark Trinity yet. 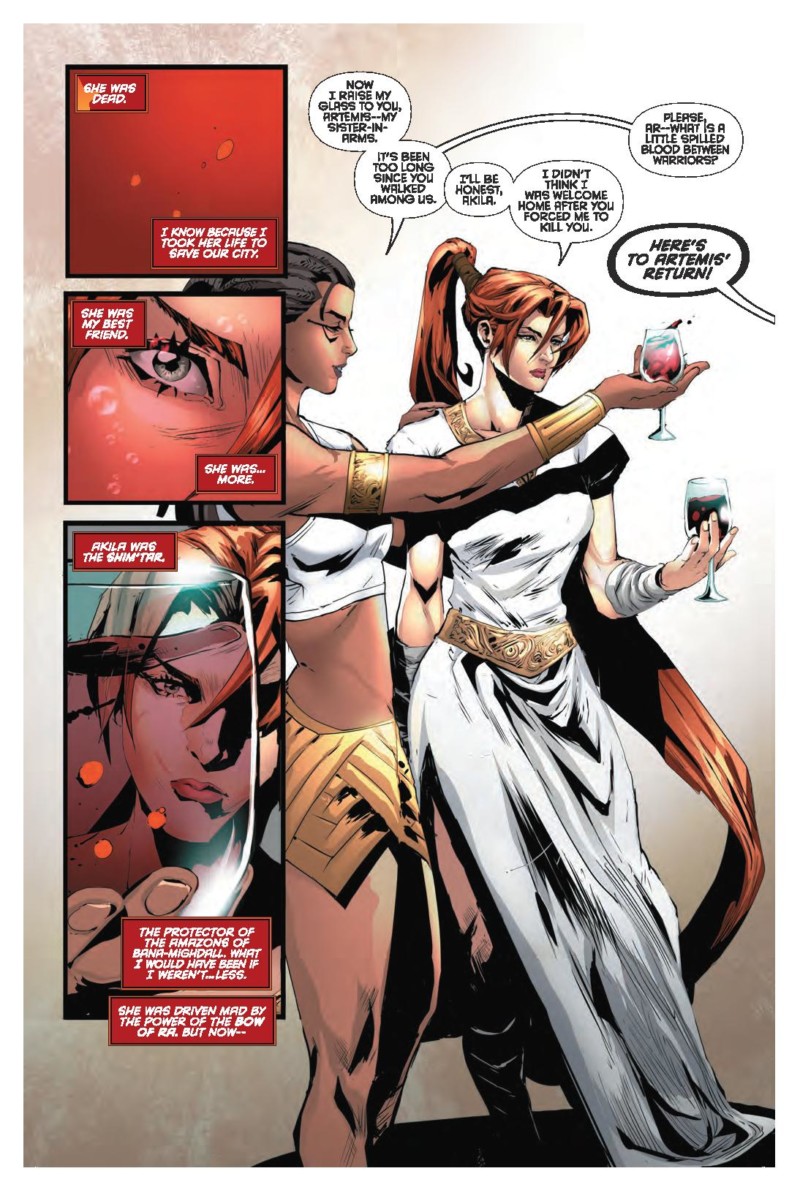 RED HOOD AND THE OUTLAWS #10 begins with Artemis reunited with a resurrected Akila in the rebuilt city of Bana-Mighdall. Akila was brought back to life after General Heinle, dictator of Qurac, sought to use her essence to reactivate the all-powerful Bow of Ra. Artemis is beyond happy to see her friend alive, but a certain lack of trust remains since Akila was once driven mad by her power. Bizarro, meanwhile, leads refugees from Qurac away from their tyrannical leader, using his brute force to guide them through the desert. Jason, finally, has a dream-like encounter with his younger self as Robin while trapped in Heinle’s interrogation chamber. In a subconscious prison, Jason relives his brutal murder at the hands of the Joker. Through this nightmare, he attempts to come to grips with both who he was and who he has become.

READ: Catch up with the Dark Trinity by reading our exclusive preview of RED HOOD AND THE OUTLAWS #9!

Red Hood and The Outlaws #10: Artemis

Writer Scott Lobdell’s storyline works so successfully because it gives each major character significant time to shine. RED HOOD AND THE OUTLAWS’ first arc was impressive, but the point of view was always Jason’s, with Artemis and Bizarro playing backup. Here, the separation of the three allows each section of the comic to explore each character’s reality.

For Artemis, her reunion with Akila opens up a more raw, tender side than we’ve previously seen. Prior to this, Artemis was all rough and tumble Amazon. That ferocity has melted away in the presence of Akila, whom she clearly loves. In the rebuilt city of Bana-Mighdall, we come to understand Artemis’ deep pain. Artemis knows she should find Red Hood and Bizarro to complete their quest. For the first time, we see her emotions drive her instead of the mission. Through Akila, Artemis comes face to face with the terrible choice she had to make long ago. The result is an immediately more nuanced character.

Red Hood and The Outlaws #10: Jason

Jason’s conflict is also a deeply personal one. Though we’ve gotten to know him the most out of this Dark Trinity, here we explore a side of him that rarely comes to the surface. We watch as young Robin begs Jason to save him while the Joker laughs harder and harder. Like Artemis, Jason is facing his demons. But unlike Artemis, he isn’t trying to confront his feelings anymore; instead, he’s trying to let them go.

The Joker is not Jason’s only demon: His true enemy is Robin himself. “A Death in the Family’s” horrific events are explored every so often, but there’s a sense of finality to Jason’s visions this time. RED HOOD AND THE OUTLAWS #10 creates a fascinating separation between the Robin and Red Hood identities. This allows us to understand just how far Jason has come. It’s all the more impressive considering that Jason’s page time is limited, with Artemis’ storyline taking up the bulk. In fact, after a big chunk spent with Artemis, the resolution of  Jason’s subconscious journey is told on a single page. Rather than feeling overstuffed, Lobdell uses every panel to depict a truly emotional resolution, as Jason is finally able to leave Robin behind. 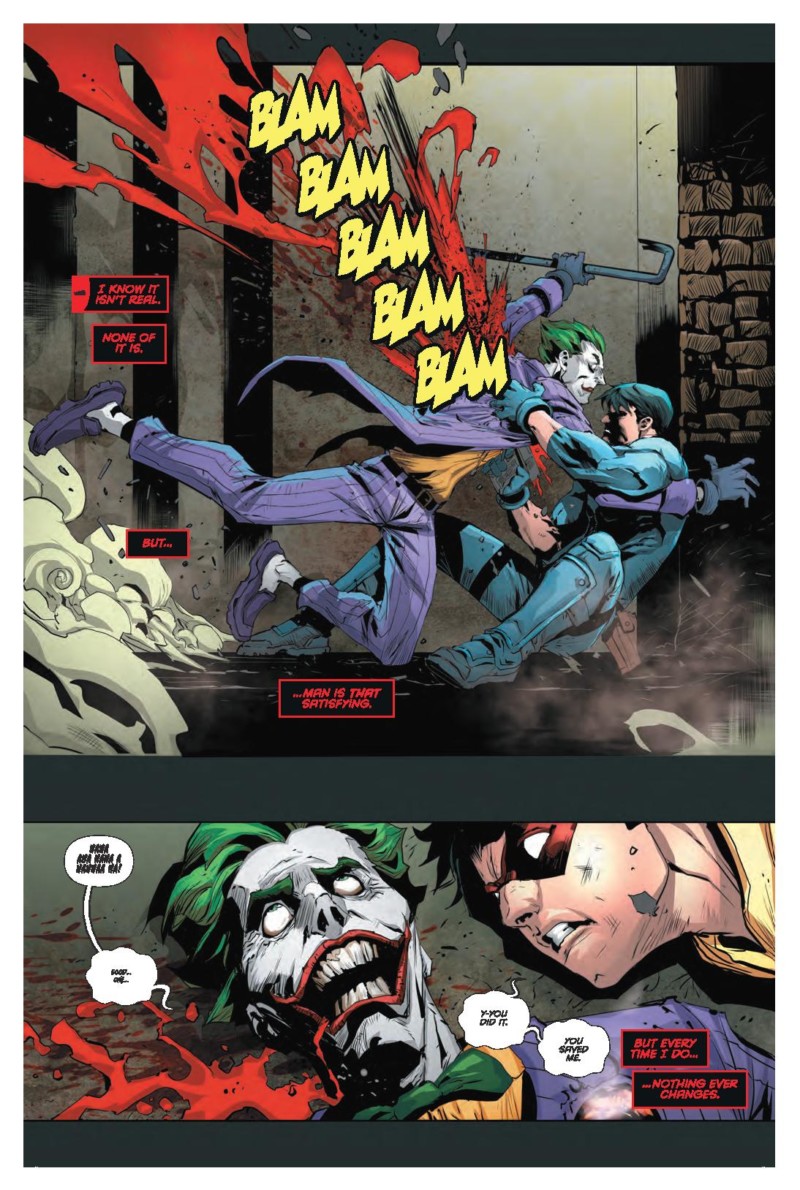 Red Hood and the Outlaws #10: Bizarro

Bizarro gets the least pages devoted to him, but that’s understandable, considering his limited intelligence prevents deep psychological exploration. Nevertheless, Lobdell gives us a greater understanding of Bizarro through his actions. As the most physically dominating member of the Outlaws, this is completely appropriate. As he leads the stranded citizens of Qurac through the desert, Bizarro literally smashes through every obstacle in his path.

Fighting through machine gun fire and explosions, we finally see just how heroic Bizarro really is. Despite his mental hangups, Bizarro puts the concern of ordinary people first, no matter the danger to himself. Without overstating it, Lobdell reinforces just how moralistic this new Bizarro is, in a more direct way than we’ve ever seen before. That Kryptonian DNA is finally starting to show.

READ: Find out what’s happening in the life of Jason Todd’s predecessor with our review of NIGHTWING #20!

Red Hood and the Outlaws #10: The Art

Dexter Soy’s artwork is magnificent, capturing the essence of each character’s journey. Artemis wears more regal and relaxed clothing than ever before, which suggests that she’s finally in a place of comfort. The intricate design work on Bana-Mighdall is impressive, with the castle walls, statues and detailed hieroglyphics beautifully depicting a place out of time. Meanwhile, Soy’s depiction of Jason’s subconscious encounter is darkly haunting. The panels invoke a dream-state merging between the walls of Jason’s interrogation room and the interior of the prison where he was murdered.

Past meets present as the Joker takes on an even more spindly, horror-movie look than usual. Soy adds to this horror-movie quality with a probing interplay between light and shadow. Jason, chained to his chair, is illuminated in a shocking white light. But as shown in his memories, the characters cast long shadows. The effect of the white light is to illuminate the dark shadows deep within Jason’s mind.

Overall, RED HOOD AND THE OUTLAWS #10 is a very effective character exploration. It successfully tells three separate stories while weaving together one distinctive narrative. By the end of the issue, each character’s story has brought them to a point where they’re prepared to unite and face the looming threat. Within one issue, we’ve gotten to know the Dark Trinity a lot more intimately. It’s the perfect way to prepare us for an exciting conclusion, which will now feature characters we can truly connect with.