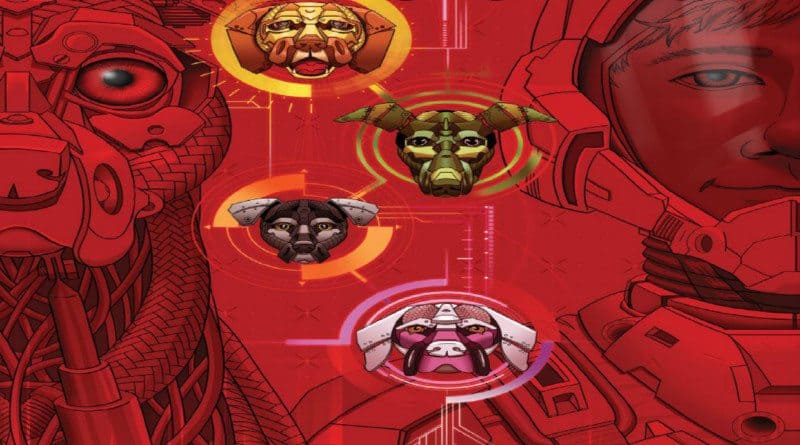 Rob Cohen and Rob Atkins’ RED DOG is the tale of a boy and his dog who are destined for something bigger than they ever imaged. In the previous issue of RED DOG, after joining his father and uncle on a dangerous mission, Kyle’s curiosity got the best of him as he inadvertently sprinted into a hail of spears. Kyle is the only youth who was born on planet Kirawan, a planet rich with a mineral known as Imperium. His only friend is an intelligent cyborg dog named Q that was built by his uncle Jake. Humans have a colony on the planet that they share with a hostile reptile humanoid alien race and other unknown creatures and aliens.

READ: Need a refresher? Catch up on the series with our review of RED DOG #1!

RED DOG #2 follows up on the cliffhanger with Kyle’s robotic canine companion, Q, rescuing Kyle from getting impaled by the aforementioned hail of spears. A series of several panels show that the battle against the reptilian aliens wages on. Ultimately, the humans prevail against the aliens thanks to a giant worm called a Naga that enters the fray after the aliens try to retreat. 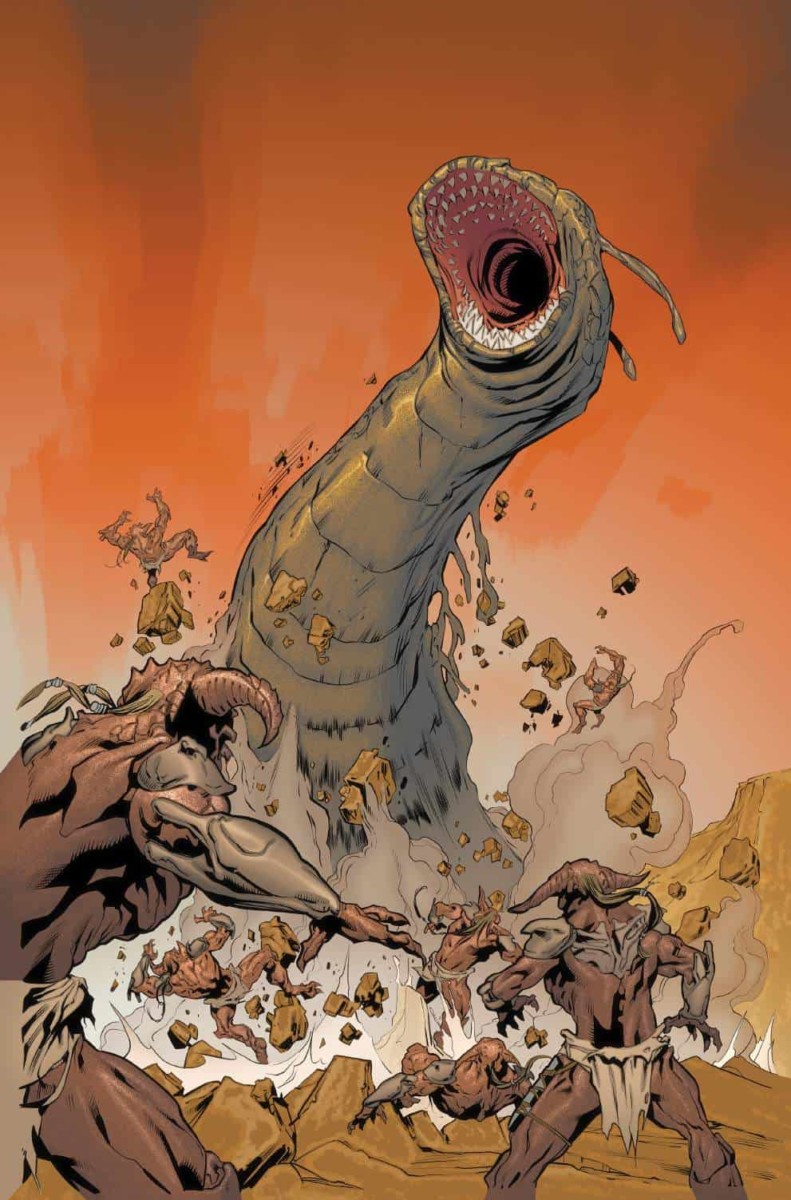 The humans retreat back to the colony but not before Kyle gets a scolding from his father for disobeying his orders. However, Q’s family of robotic dogs expands by four thanks to Jake giving Kyle a new set of canines to train for reasons that are not known yet. Once it gets going, the plot moves at a solid pace as it shows how ostracized Kyle is from his father given that he carries a tremendous burden. I particularly enjoyed the moments in which Kyle trains the new dogs and disguises them with paint and human hair because it’s a funny moment that shows Kyle’s yearning to make them look more like real dogs. My beef with the plot is that it’s a typical white teenage protagonist that gets to be the hero, and there do not seem to be any supporting characters of color so far. Hopefully, that changes in later issues.

READ: Check out our interview with RED DOG creator and writer, Rob Cohen!

The aforementioned new family of dogs is the most interesting thing that happens in the issue. The dogs are given unique looks modeled after real dog breeds, colors, and genders. This differentiates them from Q. There’s Sh3rlock, the Bloodhound; N0va, the English Retriever; Arch3r, the Pointer; Com3t, the Whippet and Spark, the Jack Russel terrier. Much like training real dogs, Cohen does a good job portraying the growing pains that Kyle has to go through in order train a quartet of dogs. Given that he has nobody else that he can turn to other than Jake, they provide a great level of comfort for him. I have a feeling that the new dogs are going to play a major role in Kyle’s development going forward so it’s a welcome addition to the plot. 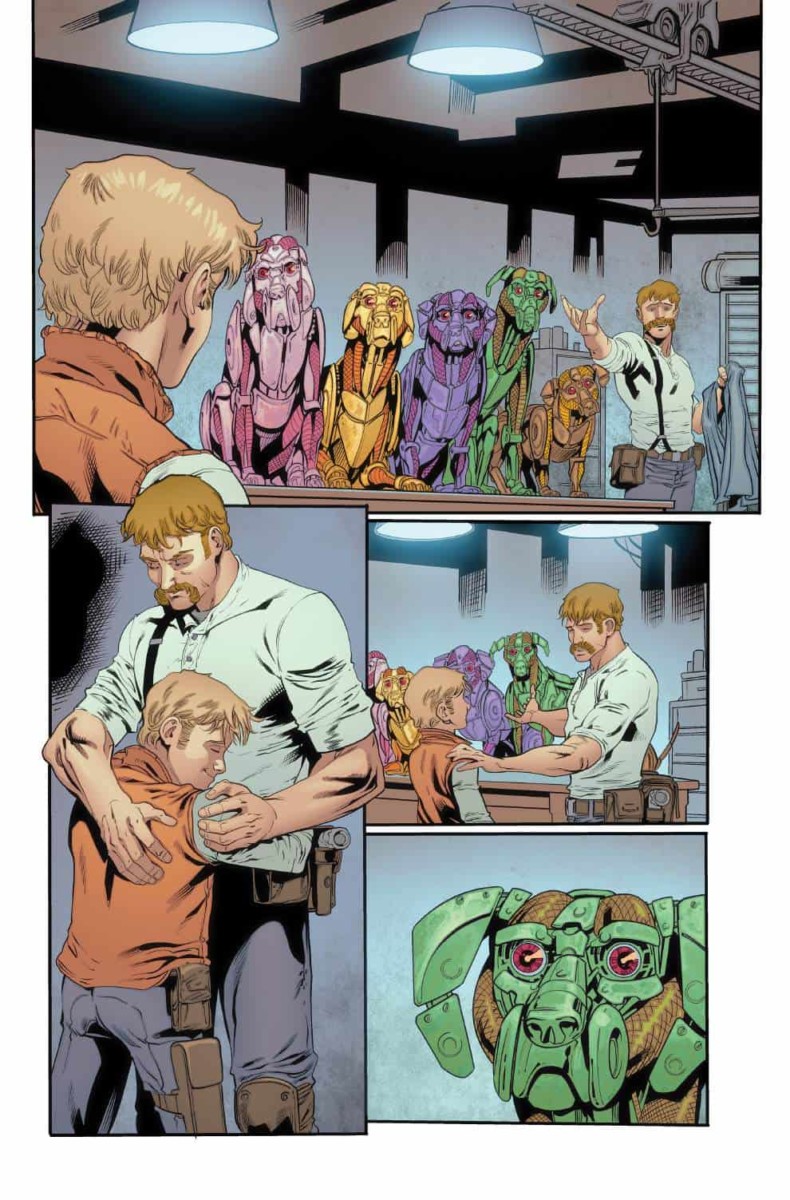 Rob Atkins’ pencils continue to remain as consistent as the characters are expressive. I particularly enjoyed the individual designs of the dogs, the careful attention to making each alien unique, and the physics of the clothes. The aliens are menacing and show off their ability to dig underground. Panels flow incredibly well as they move from moment to moment from start to finish. The dogs’ makeover is the best part of this issue due to how ridiculous it looks. It makes me wonder if Q will get a makeover in the future. John Rauch’s colors for the dogs also deserve a mention since they reminded me a lot of the POWER RANGERS. I can picture the dogs transforming into Megazord, which is always a plus.

RED DOG #2 continues to flesh out the mysterious planet Kirawan by showing off some of its dangers and introducing readers to a full set of robot pooches that are sure to play a role in future issues. Cohen and Atkins also touch upon several points in this issue that bring up more questions that have yet to be answered. Aside from the lack of characters of color, it’s a solid issue that pushes the plot forward.