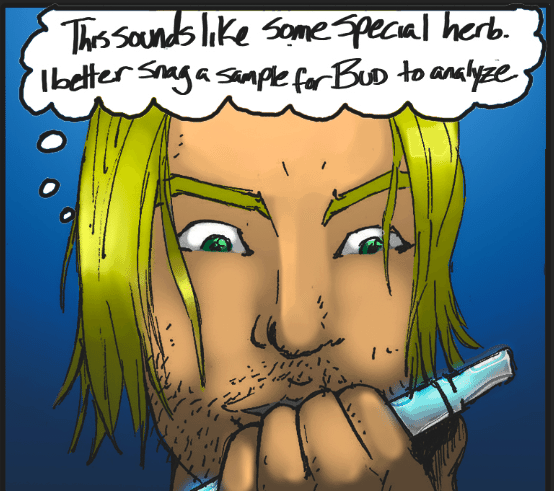 An Interview with Vigilante Entertainment, Creators of Rebel Without a Light

With the current move towards legalization, marijuana has never been more in the spotlight.  Bringing it to the forefront of the comic industry recently has been Harley Quinn with some scratch and sniff marijuana included in a special issue.  Now, a team from Vigilante Entertainment is bringing you “Rebel Without a Light,” a new stoner-comedy that plays out through the medium of comics.  Fabio was able to talk with Vigilante Entertainment to get to the bottom of this new comic and just how high it’s going to get you.

Fabio: What was your inspiration for creating this story?

Vigilante Entertainment: The seed was first planted in 1996, on a rooftop in NYC, probably around 420, when it occurred to me that James Bond solves problems with a gun, and I thought “Why can’t there be someone who solves problems with a joint, like, like a…James Bong!” It was very much a “Yes, I shall become…a bat!” moment. From then it was cultivated into what it is now, the idea that James Bong is a cannabis crusader, a hero for the legalization movement, who protects stoners from injustice. I started developing that concept with the first short film in 2005, “The Origin, Or How I Learned To Stop Worrying And Love The J.O.I.N.T”, where James is a teenager in High School, and the tie-in comic “Rebel Without A Light”.

F: How does James Bong protect stoners from injustice?

VE: Stoners live in a world where there is no one to protect them, a world of black markets and lawlessness. They can’t go to the cops for protection, dealers are often ripping them off, cops steal herb and arrest innocent people, then there’s the politicians who use marijuana’s tainted reputation to advance their own interests, while still taking bribes and profiting from it. So James exposes these politicians, catches the dirty cops, and punishes the corrupt dealers. For example, in the next story, “James Bong and The Case Of The One-Hit Wonder,” there is a new strain that everybody’s going crazy over, but there’s something wrong with it, and James senses it, so he investigates… because James Bong has a nose for nugs.

F: Since there was a short film for this character, do you recommend that new fans watch the short film before reading the comic?

VE: The short film has actually been adapted into a 6-part web series now, simply called “James Bong: The Origin”. I think it’s actually kind of more fun to read the comic and get to know the character, then go back and watch his origin as a teenager, in kind of a reverse “Boyhood” type thing, with James first realizing his destiny, like that of his father before him. That’s part of the mythology we have built for the universe which will be revealed over time.

For now, we suggest new fans read the comic first, which comes out February 1st in the pages of Weed World UK magazine, a sort of Playboy for the cannabis connoisseur, which will celebrate its 25th anniversary of publication this year. Then in March we will launch wayofthebong.com, the official website of the James Bong Universe, with a link to watch the web series, and the site will feature original comic art. In April we celebrate the 10th anniversary of the premiere of “The Origin” in NYC, so there will be all kinds of fun promotions and giveaways in April, and we’re excited for that. If you can’t wait, you can also watch the web series at MJ360tv.com, a new subscription streaming channel on the movie and music network, dedicated to the cannabis culture.

F: Which do you believe better tells your story- film or comics?

VE: WOW! Tough question, they are such similar but different mediums. The thing I find preferable about writing comics is that you can just imagine it and draw it. You don’t need a big budget, actors, special effects, or any of those bells and whistles, just a few talented, creative individuals, a piece of a paper and some art supplies. Though these days, you need a computer too, as most of the work is done there digitally, which honestly, I don’t like that much. I yearn for the days of hand-drawn, hand painted comics art. Writing comics makes me a better film storyteller, because you really have to be precise and efficient in choosing your “shots” or panels, for maximum effect.

F: What do you hope fans take from following your story and its expanding universe?

VE: The great comics have always had a message or a metaphor contained within. X-Men is about the special power of society’s outcasts, Hulk is a metaphor for using anger for good, and of course the words of the great Uncle Ben, which I live by, “With Great Power Comes Great Responsibility”. So I hope readers get the message of James Bong. But I also want fans to feel they are seeing something fresh and original that still has all the elements of comic books they know and love.

Expanding the universe will be the most fun, revealing the mythology, which is the reason James Bong became a comic, as it wouldn’t fit into the movies. The whole universe is based in the history of marijuana culture and prohibition since 1937. Actually the Bong Family History starts a few years before. And all the peripheral and supporting characters have their own stories too. Mythology is what enthralled me as a young fan boy, and I hope the fans will take away the same feelings as I had from it. I hope they will relate to the portrayal of the culture. But most of all, I hope they will be entertained. That’s why we do it ultimately, to bring some joy to the audience and the fans.

F: How did you go about assembling your team and how you feel you all work together?

VE: I assembled the team through that new-fangled invention, the internet, so I ended up with a truly international mix, which gives the book some of its unique flavor. The Spectacular young Penciler/Inker, Marek Dubienski, is from Poland but lives in UK, giving the book a slightly European-American mix, since he is also a big fan of the McFarlane Lee Liefeld Marvel era and educated at Kubert School. My letterer, the Uncanny Kay Cowling, is in Colorado, which is appropriate as it is the first state to recreationalize marijuana.

The most important thing about how we work together is the different perspective and voices for the different steps in the process of comic creation. I’ve worked both ways, with one person doing the pencil/inks/color/lettering, and in that way each step of the process progressively suffers and you need all elements to be equally creative and top notch to create a truly good book. My co-writer and producing partner, the Amazing Bianca Mina, makes sure the story lines are compelling and that I don’t fall into any holes in the plot, and writes funny jokes. Then I send it to the art team, and each of them interprets the story and the script in ways I never imagined, using their own ideas and style and skill, and we’ve been very proud of their work so far. It makes the book very distinctive. I’m also very lucky because I remembered when I was 12 I sold Lemonade to a Marvel Writer and Editor from Amazing and X-force in that golden 90s era and we had become friends, so I re-connected with him and he’s giving me guidance and feedback.

F: What is the best part about creating this character and the situations he goes through?

VE: There is so much real life inspiration out there right now. It’s such a volatile scene, the legalization movement, that every day I’m reading a news story about some event or character I can use in a storyline and explore. So many myths, truths and conspiracies to decipher. It’s such a hot button issue right now with so much vigor on both sides. The best part though is figuring out how to tell an interesting, dynamic, complex story in six pages. We have to be really smart about story. We are bursting with ideas, but we have to cherry pick the best, most story beneficial ones, and it turns into these crazy action packed adventures. It makes us very eager to have a full length book, so when these first 6 pages, the “James Bong And The Case Of The One-Hit Wonder” story, are finished, we’re going to pitch it to publishers like Image, Dark Horse, Boom, IDW, etc. I like the research period, too.

F: If you could describe the story you and your team are creating in four words what would they be?

F: What is your dream/goal in mind for this story and the character of James Bong?

VE: That James Bongs message and metaphor can be delivered to the mainstream audience in a fun entertaining way. The message that cannabis consumers should not be persecuted, and cannabis is a healthy, beneficial plant, and the metaphor of legalization as freedom. We want him to be a spokesman for the movement. Marijuana smoking is funny, but also the concept allows for action packed comic book stories, so I’m excited to share all the mythology that was developed while writing the screenplay and every day since, and explore it myself in stories. We hope to continue the story of “The Origin” in a graphic novel, have spin off books for the other characters and the mythology, and there is a feature film thrillogy planned. Basically every thing I loved as a young fan boy. Plus the universe experience that will be wayofthebong.com. The real dream I hold, when I will truly feel we have succeeded, is the day we have a tie-in line of exclusive, authentic glass James Bongs.

I must say, it is an honor to be on your interview page, in the company of Gods like Chris Claremont. Thank you obviously true comic geeks at ComicsVerse for the spotlight. It was really fun talking about the project. But what I hope will be even more fun is for comics fans to read it!

You can find “Rebel Without a Light” in February’s Weed World UK, and don’t forget to check out wayofthebong.com in March!