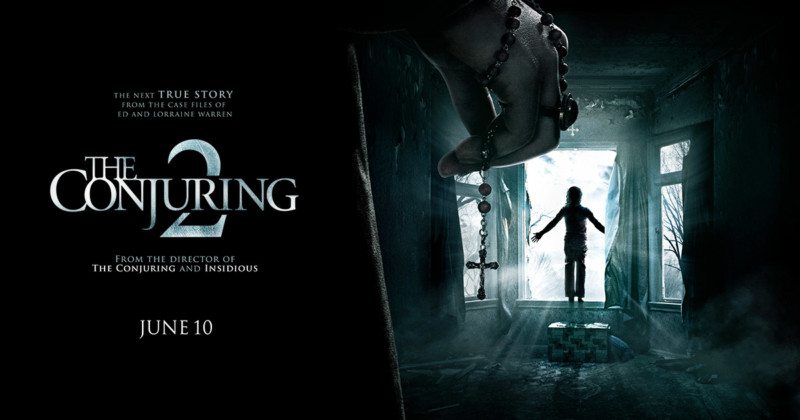 The title card for THE CONJURING 2

They say that truth is stranger than fiction. Often times, when it comes to “based on a true story” features, the truth is usually a lot lamer than what the piece of media is trying to say. When a movie takes on and mirrors an event that left people across the world terrified and amazed, however, it becomes something new altogether, something to genuinely be afraid of. THE CONJURING 2 is scarier because it is more than mere fiction.

THE CONJURING 2 follows the story of the notorious Enfield Poltergeist/Haunting as experienced by world-renowned demonologists Ed and Lorraine Warren. The duo has hundreds of cases registered on their site and even a Museum of the Occult, featuring morbid souvenirs from their battle against the supernatural across the world. It should be noted that Ed and Lorraine Warren, in reality, only briefly visited the Enfield home and had very little to do with it. You can chalk that up to Hollywood taking liberties by inserting the famous ghost slayers into the story. However, Ed Warren wrote quite a bit on what he did experience there. In short, it was nothing good.

The realities of THE CONJURING 2 and how they are brought to life on the big screen add an all-new level of horror to the experience.

THE CONJURING 2, a recent release by director James Wan, brings to life the nightmare experience of the Hodgson family. The English family gained notoriety when they experienced what was called the Enfield Poltergeist. Peggy and her four children experienced something awful in their Enfield home, awful enough that it gained world-wide attention. Awful enough that it gives THE CONJURING 2 a whole other edge of terror that many movies only dream of mimicking—for what is worse than knowing it could happen to you too? In the trailer, you can see what we are dealing with.

The details of the happenings in the Hodgson house are put to tremendous use in this dramatic reenactment of sorts, and doing some heavy fact-checking has given this already frightening movie an even finer edge.

READ: The horror comics that can get you through the upcoming Halloween!

After the Warrens take a brief visit to the Amityville house, a site of numerous hauntings after the brutal killings that took place within, THE CONJURING 2 leads right into strange occurrences happening in the Hodgson family’s home —the location of the infamous Enfield poltergeist aka the “Amityville of England.” Janet, the second oldest of the four children, is the first one affected and begins having run-ins with the spirit of an old man named Bill Wilkins— a man who supposedly died in the home years before the Hodgsons moved in.

So, what are the realities of THE CONJURING 2?

The real Janet Hodgson, the second oldest daughter of Peggy Hodgson, was slated to experience bumps in the night in the case of the actual Enfield Poltergeist. In the movie, we see all of the normal occurrences of a ghost/haunting in action: strange bumps and knocks, beds shaking, voices from nowhere. But you might be surprised to find out how much of it was based on the real experiences of the Hodgson family.

CLICK: More horror history with the history of The Swamp Thing here.

Let’s check the facts. The real Janet’s experience began with knocks on the walls and strange sounds. Going back to an interview with Janet, she did confirm that the knocking was heard frequently. Vic Nottingham, a neighbor of the Hodgsons, also confirmed that he heard knocking on the walls when he investigated the home. Nothing too scary, though emulated perfectly in the film.

Well, what about levitation? In THE CONJURING 2, Janet is noticeably thrown about the room several times. This might seem far-fetched, and photographs from the Enfield Poltergeist case (as seen above) were called hoaxes. However, there were two witnesses to the supposed levitation in real life. A baker and a lollipop lady reported seeing the real Janet hovering above her bed as they were passing by and looked up through the window.

And what about the supposed Poltergeist itself? The old man who haunts the home goes by the name Bill Wilkins, and in audio tapes from the real Janet Hodgson, claims to have went blind and had a brain hemorrhage before dying in a chair downstairs. An interesting story, and one that happens to be true. Wilkins’ son Terry confirmed that he had died in a manner excessively similar to what Janet described when she was supposedly possessed.

Finally, what about the moving furniture? It might surprise you to find that there was not only an eyewitness that saw an armchair levitate and move across the floor, WPC Carolyn Heeps, but more than thirty witnesses that reported the same. Heeps signed an affidavit to confirm what she had seen, though the police did not help in any other manner. Apparently, it is quite difficult to book a ghost for disorderly conduct.

READ: Check out how Buffy takes down rude demons!

Wan put a lot of love and attention to detail in THE CONJURING 2, much like the first movie in the series, which was based on the true story of a vengeful woman/witch named Bathsheba. One such detail is in the appearance of the demonic nun, later revealed to be named Valak. In all context, a demonic nun in a movie based on a real paranormal case sounds ridiculous.

Valak, however, is not simply there for no reason. Spelled “Valac” in original lore, the demon is described in the goetic grimoires, LESSER KEY OF SOLOMON. In other versions, its name appears as Ualac, Valu (per Thomas Rudd’s variant) and, you guessed it, as the titular Valak. Johann Weyer’s PSEUDOMONARCHIA DAEMONUM has the beast appear as Volac and the LIBER OFFICIUM SPIRITUUM as Coolor or Doolas. The MUNICH MANUAL OF DEMONIC MAGIC also names the demon as Volach. Valak is described as an angelically winged boy riding a two-headed dragon and is attributed with the power of finding treasures.

Not exactly a demonic nun, but you have to admire the dedication to picking a real beast of demonic lore. While Valak is not its typical angel-winged form, it is described as a being “taking a blasphemous form to challenge Lorraine’s faith”.

THE CONJURING 2 takes all it needs from the real-life people involved with the Enfield haunting case, including the Warrens, and brings it into a chilling reality. With real voice recordings, real photographs and a lot of love put into recreating each frightening moment the Hodgson family experienced, THE CONJURING 2 makes the real life things that go bump in the night all the more real.

And what happened after Peggy Hodgson, the mother stuck in the nightmare, passed away? Clare Bennett and her four sons moved into the home. The new tenant claimed to always feel she was being watched, and her children would be woken at night by voices coming from downstairs. They moved out hurriedly after her son Shaka, then 15, woke to the sight of a man entering his room.

THE CONJURING 2 is frightening on multiple fronts, even beyond the real experiences that it recreates. It takes hints of truth or myth as it pleases and conjoins it into a movie that has scared viewers across the world. While skeptics may argue that the Enfield Poltergeist was a hoax, the experience is still one that shook a family, and people around the world, to their core. THE CONJURING 2 takes the unknown nightmare faced by two families and brings it to life for the whole world to experience.

Just knowing that more than thirty people experienced something beyond most people’s imagination makes THE CONJURING 2 all the more horrific. It is not just horror, but horror based on a painful reality that real people faced, and still live with today.

Truth is stranger than fiction, but the mind is more frightening than both, especially with what it makes of the unknown.