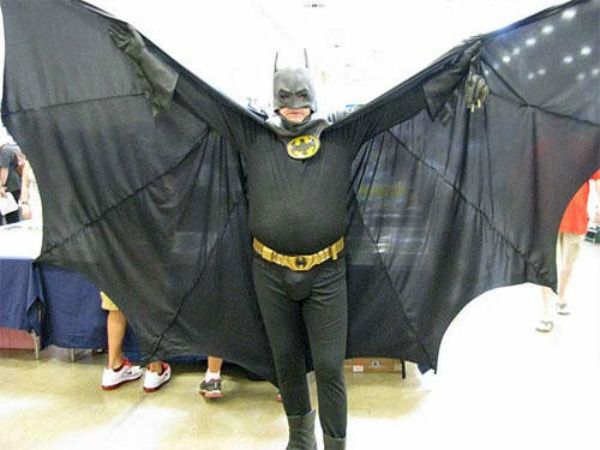 Many of my friends on Facebook are serious comic fans, from readers to artists and creators. There are many passionate and insightful arguments about what goes in the comic world that I see on a daily basis, and it can be a highlight to see so many perspectives at once. Recently, there was talk about the new IRON FIST trailer, and while it was largely positive, one comment made was how the traditional IRON FIST costume wasn’t shown. The leading argument was that of course Marvel wouldn’t use the original costume. As I mentioned in my ARROW/IRON FIST article, it’s a predominately silly looking outfit, and my friends deemed that it wouldn’t work because Marvel, and all comic movies now, have to have a dose of ‘realism’ in how they design everything and everyone in their universe. They called it a refusal of studios to truly embrace the true version of comics, that studio heads were too afraid to embrace the silly side of the source material.

When I first read this, I scoffed. It had to be fanboy griping; this was a Marvel comic book series after all. Marvel is famous for being true to their heroes and characters, not for making them dark and grim. Not only that, it’s one where a trust fund kid crash lands in Asia and is trained in martial arts to be a mystical, metal-fisted savior. And this is the latest in from a studio that has made steroid-fueled soldiers, gods, doctors turned wizards, and a secret government organization with a flying battle cruiser.  How can anyone argue studios are forcing realism in films like this? It’s all clearly insane fantasy, the kind that all comic fans love.

Then I started to think about it.

Ironically, these thoughts brought me back to Marvel’s rival, DC Comics. I grew up back when the first BATMAN film, directed by Tim Burton, was still new and exciting. It’s one of my favorite movies and for my money, the best film portrayal of Batman. As I thought about realism in the comic movie world, I thought about that film more and more. At the time, it was a dark and more serious return to the original comics and a move away from the zany Adam West TV series of the 1960’s. This Batman was dressed in black, more violent and fought criminals that got to be much more violent than before. Yet at the same time, it’s still inherently ridiculous. Batman literally lives above a cave that is filled with crimefighting equipment he somehow brought inside secretly. He has a rocket car that’s not linked to Bruce Wayne somehow. The Joker’s evil plan is to make everyone smile to death using tainted cosmetics!

So clearly, the ‘comic book silliness’ was alive and well here. But at the time, it was considered a more serious and adult comic book movie. Then I thought about other versions of Batman, specifically the DARK KNIGHT trilogy. I tried to think about what made that version so different from what had come before.  Then I found it.  Here’s how the Tim Burton BATMAN shows Gotham City: 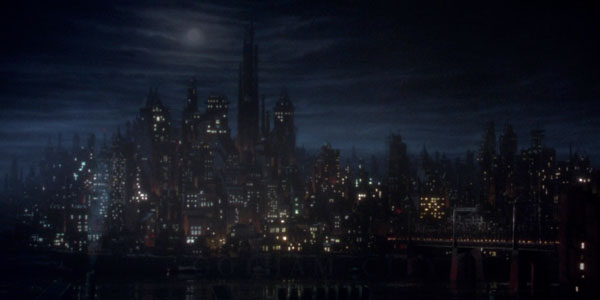 Here’s how DARK KNIGHT does it: 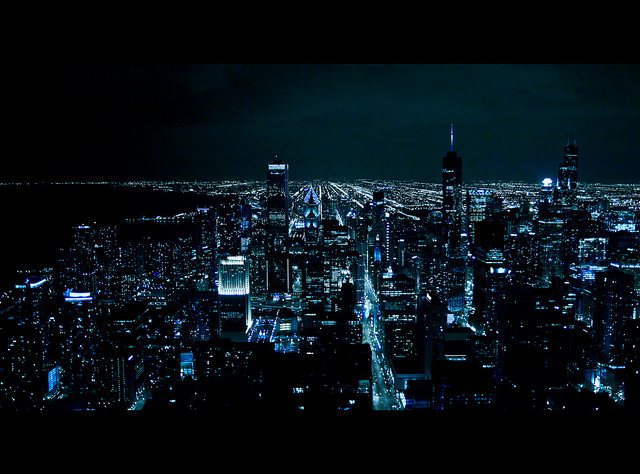 Clearly the approach is different, with Burton looking like a gothic metropolis and DARK KNIGHT… well, we all know it’s Chicago. So why is that important? Because it shows the differences in the approaches. Burton’s approach is to take the material seriously. He embraces the ideas the comics have presented — the darkness of Gotham, a hero dressed as a bat, a cadre of gadgets, evil clowns — and accepts that they exist. He then presents them in a way that isn’t tongue-in-cheek. He makes all those elements part of the film, but makes it clear they exist in a world where they fit. Burton doesn’t explain how Batman became Batman, how the Joker commits his crimes or survived the chemical bath that changed him in the first place. These ideas are just there, and the audience has to accept that they are reality in the movie world. Burton brings the comic to life, albeit through his own creative lens, and his film is about making the ‘silly comic stuff’ into a serious matter.

DARK KNIGHT’S approach to Batman is to make the material realistic. We see Batman traveling the world and getting the training needed to be Batman. We learn how he has managed to secretly build his arsenal and the corporate tricks he uses to make it work (buying his costume in pieces and in bulk from different companies). Not only that, we watch as he deals with the physical aspect of being Batman — the bruises are visible, the mistakes he makes leave their mark. It makes the character more human, and more like someone that could exist in the real world. Gotham City isn’t a gothic set, its real buildings and streets. The Batmobile is an army prototype that didn’t get funding. Batman’s cape is enhanced with an electronic skeleton. Everything he is and does is explained to the audience, showing the real-word aspect.

So why is that a problem? Because real world Batman seems even more ridiculous.

Look, I’m not slamming the DARK KNIGHT series for attempting to make Batman seem more plausible. But all their attempts don’t hide the fact that in order to make a comic book movie, the ‘comic book silliness’ has to be acknowledged. Even their own movies show this — BATMAN BEGINS is half a serious how-to-make-Batman story and then half a story where villains use a super-microwave to evaporate a city’s water supply to release a fear gas that will make Gothamites kill each other in fear. Try to rectify those two things. Just try.

Usually making it seem realistic just makes it seem more silly, too.  DARK KNIGHT RISES ends with Bruce Wayne passing on the mantle of the Bat to John Blake, after saying that Batman is a symbol and that anyone can take it up. It’s a fine idea, until you see Blake standing in the Batcave, filled with tech and equipment, and then think about the resources and training Wayne endured over three movies to get it all. And now it’s all going to be funded on a cop’s salary.

Making it more realistic only highlights the incredible needs being Batman requires and how almost no one in the real world could meet them. It shows the troubled marriage of reality and fantasy and hurts the overall product. Yet that doesn’t mean embracing all the silliness works, either. Movies have to take the material to a certain level of seriousness to work, and not doing that leads to…

So what does that mean for Marvel comic book movies and shows? Should they stop trying to be realistic, or should they prepare for bad punchlines and silly costumes? Honestly, all it really means is that the people making the films need to find that middle ground. And in order to do so, they’d be smart to follow the example of Burton’s BATMAN. Embracing the comic world fully allowed them to create a world that reflected the source material. But they also knew in order to present comic characters and stories seriously, they need a drop of reality. Marvel needs to think about how a comic book world actually functions, and bring it to life in a modern setting. But they also need to look at the comic world itself and not be afraid to take necessary elements, even if they are silly (Joker might’ve had a ridiculous way of killing people, but he WAS killing people).

Marvel has succeeded and failed on both ends of the spectrum. On one hand, they embrace gods-as-superheroes and having a blind lawyer fight crime in black pajamas (before getting body armor). On the other hand, they are clearly inserting their heroes into modern day reality, like replacing Falcon’s actual falcon sidekick with a flying robot. There’s also been the long-standing complaint of how Bryan Singer’s X-MEN films replaced the character’s colorful costumes with standard black leather outfits. Youtuber KaptainKristian stated in his video how colors help individual X-Men stand out in a group, but also let them appear unified. That element of unified individuals is a core concept of the X-Men, yet it was lost for, to quote the video, “an outdated version of cool.”

Still, missteps aside, Marvel’s strategy is largely the best way to stay loyal to the comics, but also make the films serious about presenting the characters. IRON FIST seems to be taking that route of seriousness, since the trailer makes certain comic elements clear (mystic kung fu in the Himalayas, magic fist of metal), but doesn’t play them tongue-in-cheek. LUKE CAGE and JESSICA JONES have similar treatments, being true to their comic origins (Cage got his powers through experiments in prison, Jones through a toxic waste bath), though they take time to both honor and poke fun at the sillier sides of their respective comic histories. So in conclusion, studio heads, don’t be afraid to embrace what you’re adapting, even if it is silly at times. That’s why we love it. And comic fans, don’t expect a perfect representation of your heroes. You’re bound to see something you might regret.