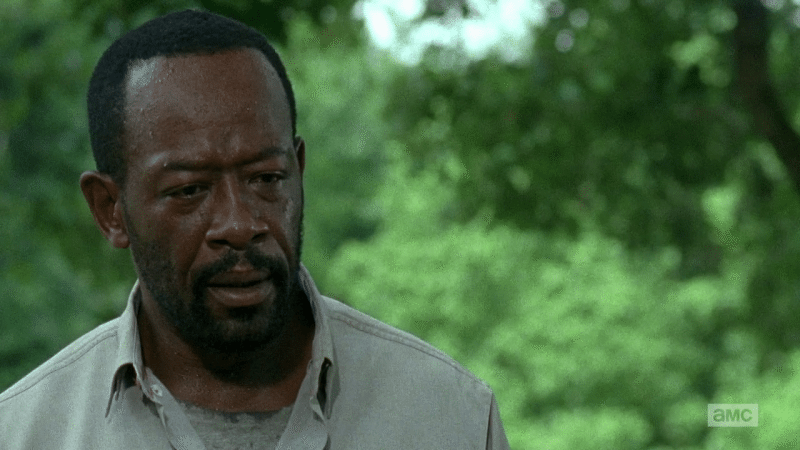 Pausing on the buckets of drama surrounding a possibly dead Glenn, a surrounded Rick, and thousands of walkers – this week the viewing audience entered a bottle episode – “Here’s Not Here” – that takes us into the past to catch up on how Morgan came to be the level-headed, bo-staff-wielding moral compass we now know and love.

CLICK: Our review of Season 6 Episode 3 of The Walking Dead!

As a quick refresher – several seasons ago in an episode entitled “Clear” – Rick, Michonne and Carl ran into Morgan for the first time since his appearance in the pilot. They sadly discover several things… A) Morgan has gone batshit crazy… B) Because he has now lost both his wife and his son … and C) He has set up a Home Alone style zombie trap zone, where he lives alone – stock piling corpses who get stuck in his spike-pits.

In short, Morgan was in a BAD way… and Rick had no choice but to abandon him for the time being. It seemed Morgan was simply too far gone… having been consumed by his loss and his own self hatred, for failing to save those he loved… 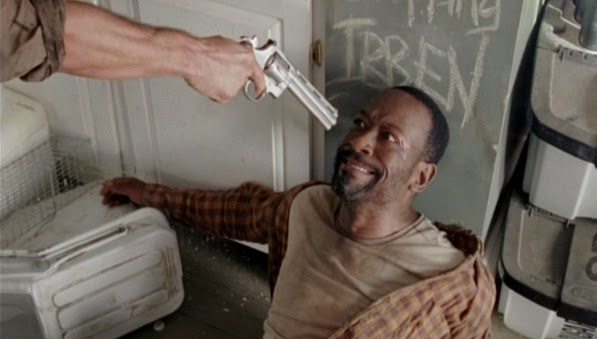 Morgan, since that time, becomes somewhat of a monster, not unlike the walking dead themselves. He adorns a very primal rage and becomes obsessed with killing and “clearing” walkers out, even killing what appear to be innocent people with ZERO questions asked in the process.

I LOVED how some of the sequences depicted Morgan in his manic state, and how they were filmed, each sequence treated with a sort of disorienting and pulsating “vaseline vignette” around the frame, illustrating Morgan’s primal nature has taken complete control. He’s just completely manic.

Fortunately, Morgan is soon knocked out and apprehended by a kindly chap named Eastman – played by the brilliant John Carroll Lynch.

John Carroll Lynch is an actor who has been turning in amazing television performances for about as long as I can remember. One role that recently gave me chills was his portrayal of Twisty the Clown in American Horror Story Freak Show. The man gave me nightmares!

Anyway, Eastman is revealed to be a former forensic psychologist from Atlanta who handles the apocalypse like a minor traffic jam. Life is precious in his eyes, and he handles himself this way thanks to a martial arts practice known as Aikido. He later reveals that he practices this mentality DESPITE having lost his loved ones to a psychopath whom he’d analyzed as part of his job. He reveals that he, too, traveled the road that Morgan is now on, a road only traveled by those with savage vengeance in their hearts.

Watching Eastman more or less rehabilitate Morgan, and in fact make him a much stronger person in general struck such an interesting dynamic for we, the viewers. Morgan, as we know him now, is currently this stoic moral guide. It seems he might even be trying to pass on the teachings of Eastman, as we see later in the episode. But, seeing how FAR he had to travel to get to his current point was quite moving. This launches Eastman into straight-up Yoda status for Morgan’s character. 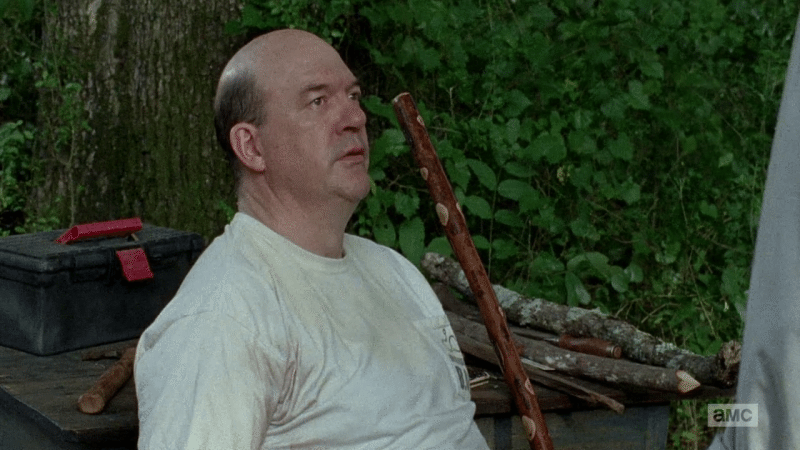 One of my favorite moments in this episode was when Eastman makes the point that, as humans, we’re not even built to be killing one another, or anything else for that matter. We’re simply not designed with the physical equipment, but are preternaturally equipped with the emotional equipment to feel for one another. The door is open, as he says. Literally. Even after Morgan threatens to kill him, he reveals that the door to Morgan’s cell has been unlocked the entire time he’s been locked up.

We also find out that, in a way, Eastman has also been ‘clearing’ just like Morgan. His form of clearance is so much more pure, however, as it’s revealed that he buries all the walkers who die by his hand. As he puts it, “It’s about redirecting, evading, and actually caring about your opponent.” This is an INSANELY courageous mentality to brandish considering not only the world’s circumstances, but also the circumstances we’ve been seeing in the previous few episodes. We’ve literally been mere inches from death since the premiere of Season Six – and here comes a character that instills so much unbridled hope. It was really refreshing, and a reminder that the character palette in this show is highly diverse.

Soon enough, Eastman has taken Morgan officially into Aikido-Training land, living by the coda “To evade is to move forward.” Easily the most hopeful moral lesson we’ve learned in a LONG time takes form by the end of this episode- that life as our heroes know it has ended, but the world itself has not.

Sadly, this IS The Walking Dead. So obviously, things have just GOT to go South. When Morgan is confronted by a walker, he realizes it’s the corpse of a young boy he killed mercilessly earlier in the episode. When he fails to act, Eastman saves his life – getting bit in the process. Despite coming all this way, Morgan’s actions end the life of his new found mentor. It’s a tragic end to a really amazing character.

READ: Our review of THE WALKING DEAD comic!

Furthermore, the episode concludes with a dark secret being revealed- Morgan is holding a Wolf hostage, who threatens to kill everyone in Alexandria. Morgan is attempting to do what Eastman did for him, and may be trying to “bring back” this member of The Wolves. I can’t say, as a viewer, I necessarily AGREE with Morgan keeping this secret. I feel as though at this point, Morgan should be able to look at this guy and go “Oh, no, this guy’s gotta go,” but hey, that’s just me. 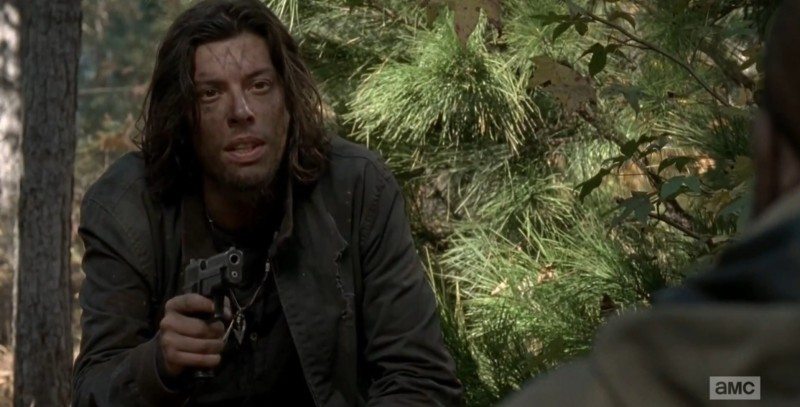 With all the drama encircling our characters, we can only HOPE Morgan comes to his senses and puts one in this dude’s computer, or somehow manages to rehabilitate him into NOT being a total psychopath. Fingers crossed very, very hard either of those scenarios plays out.