RAVEN #5 is the second to last issue of Marv Wolfman’s limited RAVEN series. The writing so far has been excellent, showing the characters’ great emotional depth. It’s avoided focusing too much on Trigon, which many Raven stories do; instead, the main villain is a massive soul-eating orb of unknown origin. The art by Ruy Jose and Diogenes Neves has been equally strong, perfectly articulating the emotion and urgency of Wolfman’s story. RAVEN #5 is an excellent, if unexpected, installment in the series.

READ: Missed the last issue? Catch up here in our review of RAVEN #4!

Last issue saw Raven fighting threats from all sides. One foe, of course, was Trigon; however, this time instead of an outside evil it was his dark influence within herself that Raven fought. This inner battle is one Raven constantly fights, and Wolfman wrote it eloquently. Jose and Neves’s artwork in the scene was simply beautiful. After this internal struggle, she went to face down The Thing once again, stopping on the way to heal an injured friend and take down some costumed villains claiming to be responsible for the chaos. She quickly discovers their lie, and leaves them to the police in order to return to The Thing, the glowing white orb menacing her city, possessing citizens and pulling them inside.

RAVEN #5 picks up with our heroine pounding at The Thing, still unable to enter. More and more people are being pulled in, and try as she might, Raven is powerless to stop them. She can ease their fears, pulling their emotions into herself instead, but she cannot break The Thing’s hold on them. 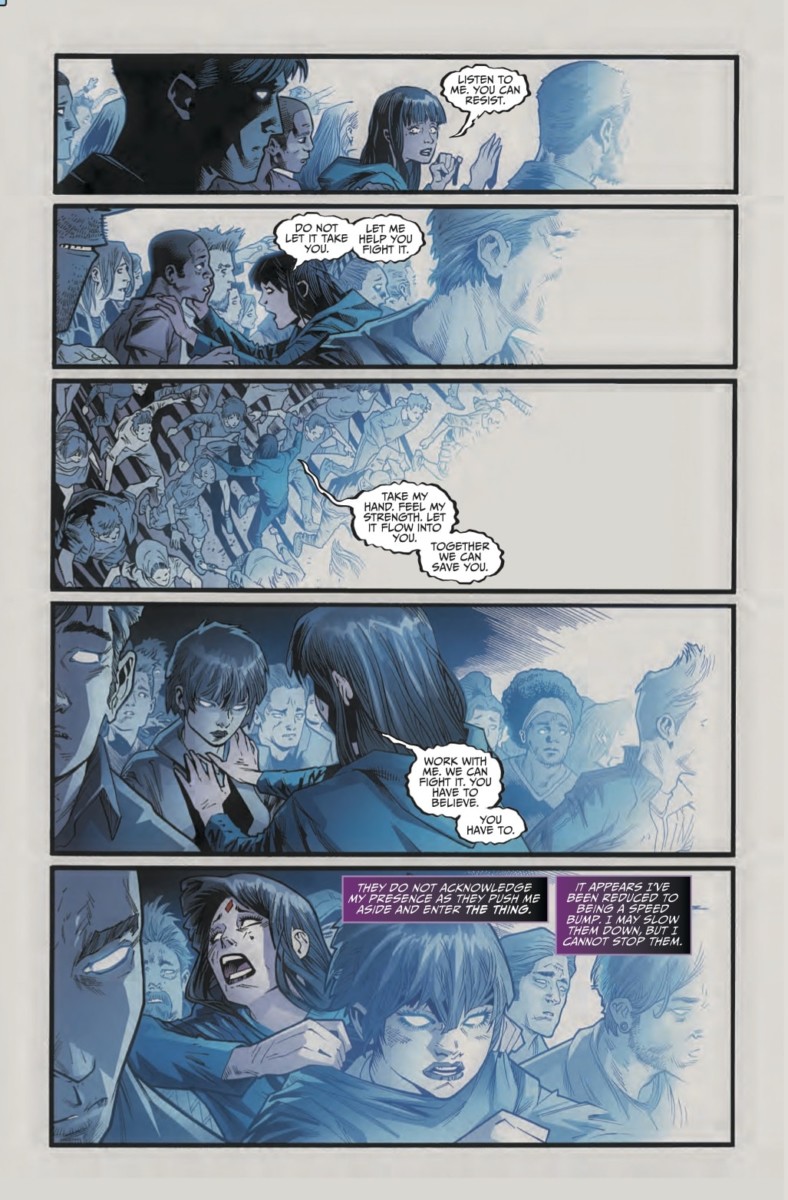 The issue then turns away from Raven, and toward her new family. Her aunt and uncle, like most of the city, are watching the news with rapt attention. It is her young cousin Billy, however, who recognizes “Rachel” on the news, and makes the connection that she is Raven of the Teen Titans. This revelation throws the family into disarray. I, for one, was shocked by this turn of events. Though her identity had been revealed to some when she healed her friend in RAVEN #4, I expected Raven’s family to be the typically clueless secret identity family. Wolfman’s decision not to go this route turns out to be a great one, as we are treated to a short but powerfully emotional arc for Raven’s aunt, Alice. We see her shock and inability to process this revelation. As a devout Christian, Alice sees all that’s going on as demonic, making her question the very nature of her niece, something Raven herself has been questioning. Each member of the family handles the revelation in a unique way, and each is enthralling and moving. 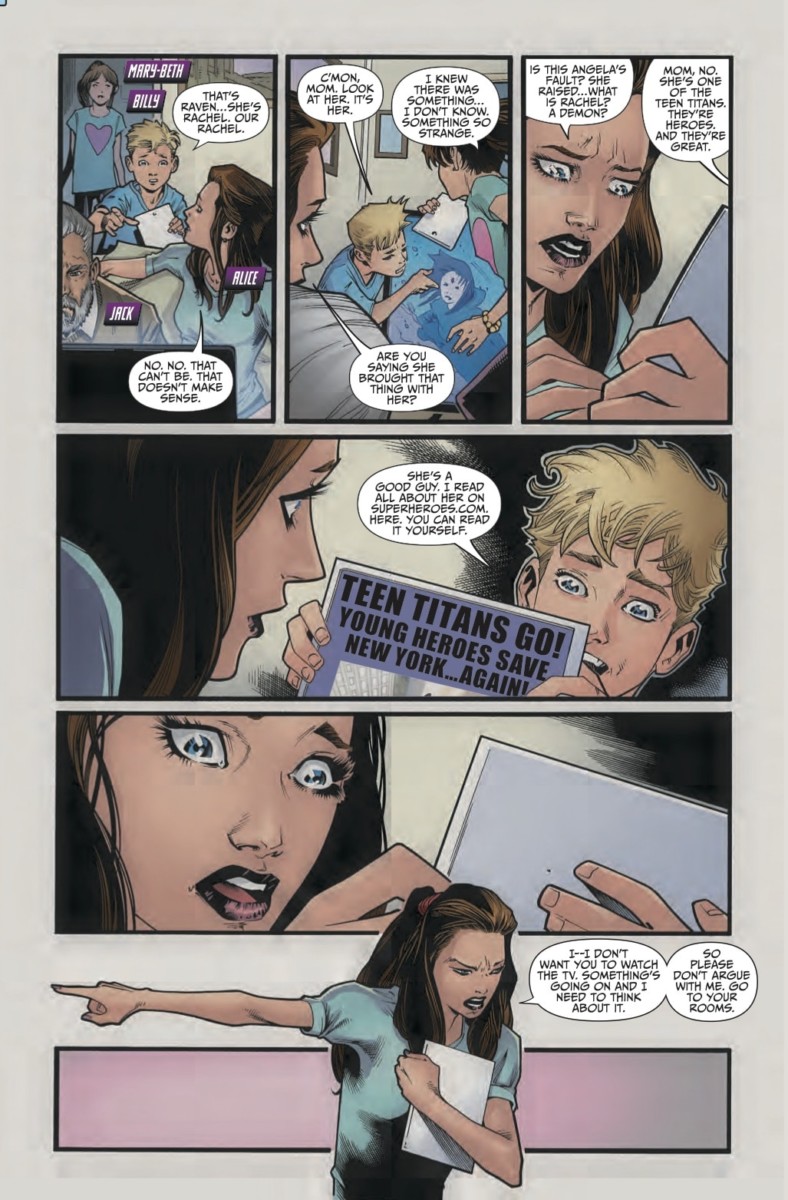 Because of Raven losing her secret identity, someone important to her ends up in the line of fire. Aside from being moving, this serves to further the main question of the issue, one posed by Raven herself: “Do I have to be evil for good to be done?” Raven has always struggled with her demonic side, and this series has been no exception. She conquered it twice in this last issue, but still faces it in RAVEN #5. It gives her the power she needs, but at what cost? What does giving in to the darkness mean about her character? These are the questions both Raven and her aunt are asking, and I sure hope Wolfman gives them some clarity. It would be the perfect closing to the series, which has been strong on introspection into Raven. I, for one, believe that she can accept her legacy without falling prey to it, and I look forward to seeing her discover this.

READ: Love Raven as much as we do? Here’s some classics with her and the other Teen Titans!

The art in the sequence where Raven struggles with her inner devil is terrifying. Ruy Jose and Diogenes Neves do a phenomenal job here. The art beautifully shows how close she comes to realizing her demonic potential. Another place the art shines especially is in the emotional portrayals of the characters. This is a must for any series, but particularly for one that has focused so heavily on emotions and characterization. Raven is drawn perfectly; the desperation and caring on her face are a testament to the team’s complete understanding of the character. As an empath, Raven feels strongly the emotions of others and, as much as she tries to repress them, her own. She cares deeply about all the people she is trying to save, and that’s why I believe she’ll never give in to Trigon’s evil. Her powers may spring from the worst evil, but her intentions are pure.

All in all, RAVEN #5 was a strong installment in a series that has been an intimate investigation of a beloved character. We’ve seen Raven struggle with her emotions, something all readers can empathize with. Wolfman’s writing, as always, is phenomenal, and Jose and Neves are an artistic team to be reckoned with. I’m truly sad that we only get one more issue; at the same time, RAVEN #6 can’t come soon enough!