Last time we saw her, in RAVEN #3, our heroine was battling the ominous entity called, for lack of a better name, the Thing. The Thing is a soul-absorbing, glowing white dome that’s now covering several city blocks and expanding rapidly. Raven has no idea what it is; she only knows she must stop it before it consumes the whole city, and then the world. Injured trying to enter The Thing, Raven is taken off to the hospital alongside her friend Antt. Meanwhile, a group of costumed villains released a video claiming responsibility for the attack. Now halfway through the series, the plot is really thickening. The series has been excellent so far, showcasing Raven’s relatable high school struggles, complicated further by her secret identity, and this issue was no exception. All this set the stage for a thrilling ride in RAVEN #4.

READ: Need catching up? Here’s our review of RAVEN #1!

RAVEN #4 picks up with Raven in the hospital and the city failing to contain the problem on its own. To the doctors, it appears as though Raven’s “soul-self” is attacking her. The doctors have no idea how to help Raven, as they’ve unsurprisingly never seen a patient battling an outside manifestation of her soul.  The real battle, however, takes place inside Raven’s mind, as she wages war against the part of her soul tied to Trigon, an interdimensional demon who also happens to be her father. It’s a fight she’s had before, but this time she seems defeated until a friend shows up to give her strength. 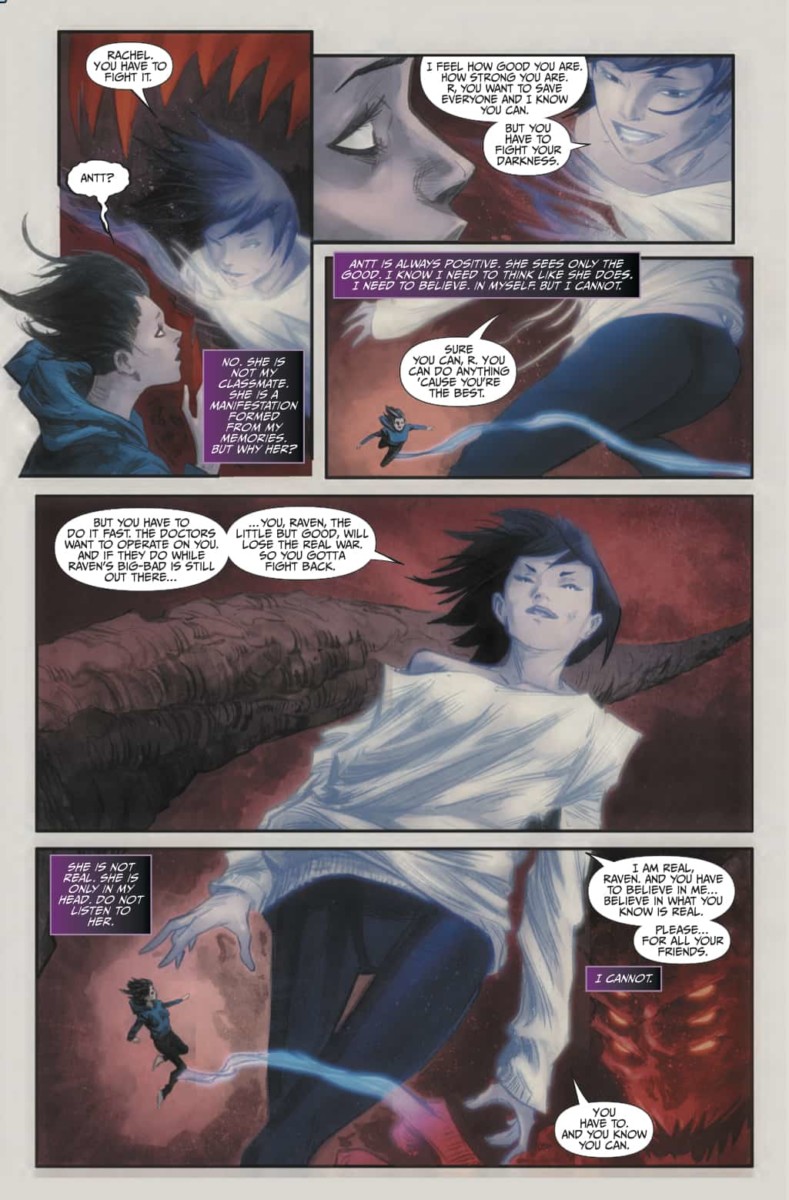 That friend is Antt, one of the people Raven was attempting to save from The Thing before she was injured. Antt is a friendly, eternally upbeat and peppy girl who takes to Raven immediately, seemingly without the influence of Raven’s empathic powers. Though they’ve only known each other a short time, Raven has come to care for Antt. It’s from Antt’s apparition that Raven finds the willpower to regain control of her soul. I really like how Raven, the empath who usually takes away other people’s negative emotions to help them, instead needs to borrow positive emotions to save herself. It’s a nice touch to have her be saved by a friend, a concept she doesn’t even understand at first.

Once Raven awakens, she returns to the fray. She goes after the would-be masterminds, only to discover that they’re merely exploiters of the chaos, not the cause of it. This enrages her, and she must once again tame Trigon’s rage within. This time, she finds the strength to regain her center on her own. Raven battling her father is a constant in her stories, but it’s portrayed masterfully and with a fresh twist in RAVEN #4. It doesn’t feel like the same-old ‘girl battles demonic father’ story because this time she fights to save her newfound friends and all the other innocents.

Raven’s struggles with her emotions are universally relatable, especially so for teenagers. Many around Raven’s age can also relate to her fight against who she’s expected to be, if perhaps on a less reality-threatening level. At the heart of it, Raven’s emotional journey is to escape her parents’ shadow. One of the primary benefits of young superheroes is their appeal to younger readers, and the series does a great job of portraying a sympathetic teenager who has parallel concerns to the average high schooler. Some of us have struggled with being the new kid, not sure how to act. Many have felt trapped by their parents’ expectations. All of us have had times where we lean on our friends for strength. RAVEN’s expert creative team has perfectly captured this relatable teen hero. 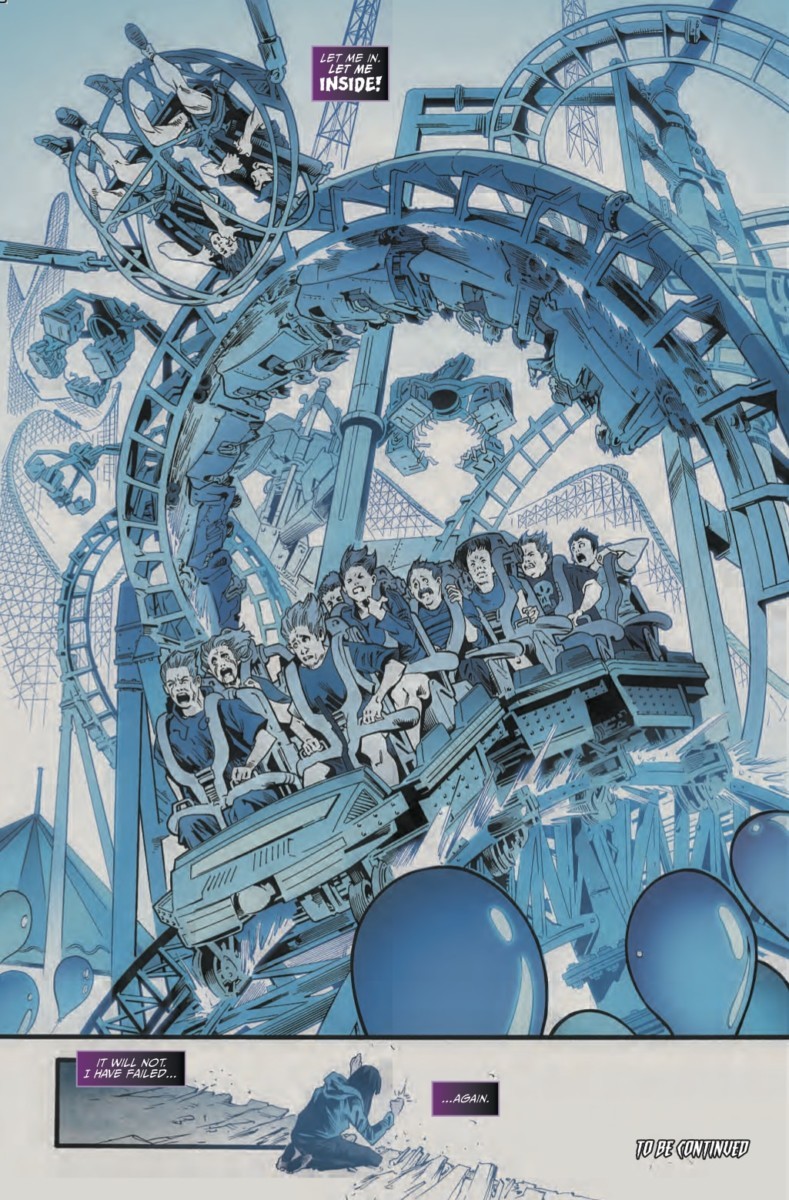 Writer Marv Wolfman and artists Ruy Jose, Diogenes Neves, and Alison Borges do a phenomenal job of portraying the gloom and pain of Raven’s world. The mind sequence is ethereal and dreamlike, with softer edges melting into a warm red background. The haziness and blurred edges make the panels feel surreal, and throughout Raven appears to fade away into her mind. Trigon’s edges harden as Raven’s blur, showing how she is losing the battle. The real-world panels, on the other hand, are sharper and colder. They do a great job of showing the pain and fear pervading the city. The detailed work on the character’s faces is especially good in this regard. Every character, even seen from afar, has some degree of fear or panic on their face.

If I have one complaint about RAVEN #4, it’s that we don’t learn much in this issue. Raven still doesn’t know what the Thing is, she still can’t enter it, and once again we don’t know who or what is causing it. Since the entire series will be just six issues, it felt strange to go an entire issue without really advancing the main plot. One loose end is addressed, but not in a way that furthers the story. It’s a good moment for her character, as we see her internal struggle again, but we don’t gain any further understanding of anything other than Raven. The great side plot we get instead, however, is more than enough to make up for this. A well-fleshed-out side plot that fits so seamlessly into the main plot is never really a bad thing.  Overall, I loved RAVEN #4 and can’t wait to see more!