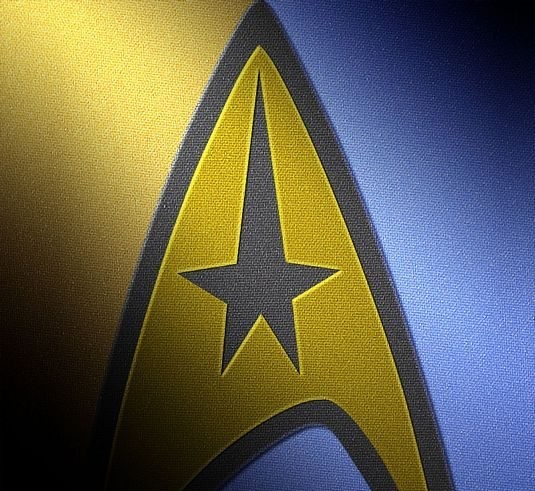 Last week we here at ComicsVerse began celebrating the fiftieth anniversary of STAR TREK by beginning a countdown of the franchise’s twelve feature films from worst to best. The bottom six were made up of the fifth, first, tenth, seventh, third, and twelve installments in the series.

READ: Check out the first half of the STAR TREK Film Rankings here.

Before getting to the top six, I feel I must once again run down why I believe I’m at least qualified to voice opinions on the series. I’ve been a major STAR TREK fan since I was about four years old, have seen all the films and every episode of every series, read many ancillary novels and comics, and even opened a TNG-era uniform (operations division, for those curious) at one point in my life. Now that that’s out of the way, on with the list: 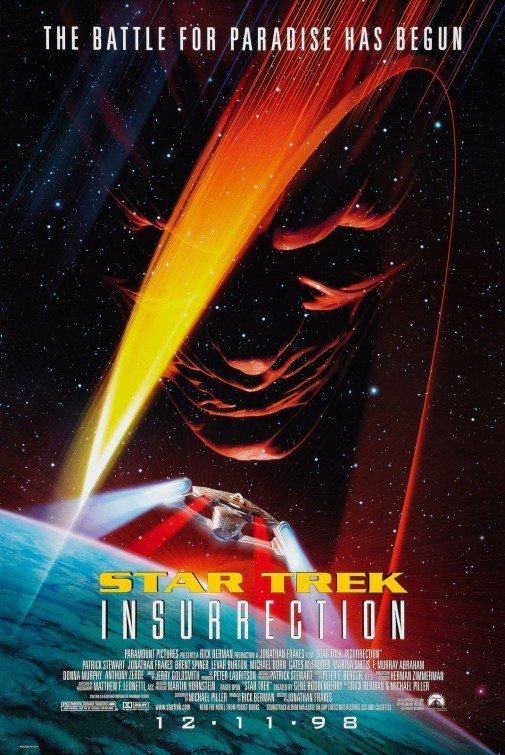 After a so-so first adventure detailed last week and a spectacular one that we’ll detail below, the STAR TREK: THE NEXT GENERATION cast returned for a third cinematic outing with this 1998 morality play directed by cast member Jonathan Frakes. STAR TREK INSURRECTION begins with Data (Brent Spiner) attacking a hidden Starfleet base on an unknown planet, revealing its presence to the populace, the Ba’ku. The Enterprise-E is sent to investigate, and the crew pieces together that Starfleet was aligned with an alien race know as the Son’a to take advantage of the planet’s “metaphasic particles” that keep its population young. They further learn that the Federation plans to forcibly remove the Ba’ku from their home. Angered by this, Picard and crew rebel against the Federation’s orders and begin aiding the planet’s residents while at the same time dealing with how the particles are affecting them.

INSURRECTION gets a great deal of hate amongst Trekkies, though to be honest I’ve personally never been able to figure out why. While it’s not the most cinematic of TREK films, it plays like a very strong episode of TNG. The film’s script, from legendary writer Michael Piller, is classic STAR TREK with the captain and his crew fighting the good and moral fight above all else. It’s also probably the most balanced of the TNG films, with each character getting moments to shine, highlighted by the romantic reunion between Frakes’s William Riker and Marina Sirtis’s Deanna Troi. 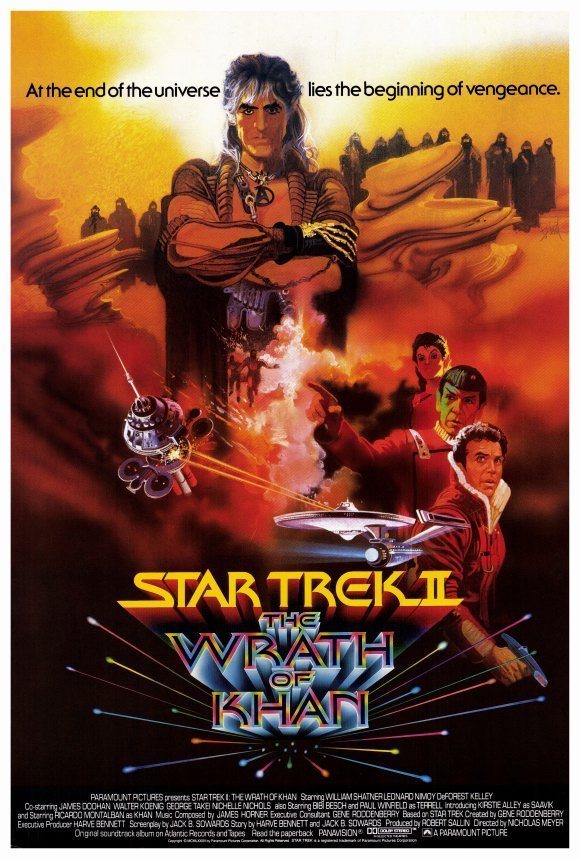 While STAR TREK: THE MOTION PICTURE was a moderate financial success, it went over budget and both critics and audiences were turned off by the film’s story and pace. Due to these issues, Paramount Pictures demoted Gene Rodenberry to a consultant role in the Trek film franchise starting with STAR TREK II: TH WRATH OF KHAN. Producer Harve Bennett took the reins and crafted the first script which was eventually directed by Nicholas Meyer. The film follows the Enterprise crew, including a mid-life crisis Captain James T. Kirk as they’re drawn into conflict with vengeance crazed Original Series villain Khan Noonien Singh who wants to wipe them out and intends to use the terraforming Genesis Torpedo to do so. The film plays out over a series of ship to ship battles, with the Enterprise taking heavy damage. Kirk and co. eventually prevail, but not before the death of Mr. Spock.

TWOK appearing this “low” on my list is probably my most controversial choice. The first thing that I’ll say though is that the film is very, very good. Ricardo Montalban gives a performance for the ages that’s worthy of the praise it’s gotten in last thirty-plus years. Shatner and Nimoy are both on-point as well, and the latter’s death-scene holds up as iconic. TWOK also essentially saved the franchise, becoming a massive hit and introducing the uniforms, set designs, and general aesthetic that the rest of the TOS films would use. All that said, I believe the film is a tad overrated due to its historic importance and the death of Spock. Two of the following original cast films are stronger in their stories and overall creative direction. 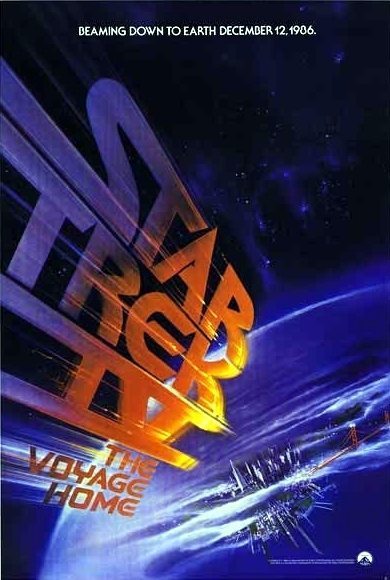 Though not as successful as THE WRATH OF KHAN, THE SEARCH FOR SPOCK was enough of a hit that Paramount allowed Leonard Nimoy back into the director’s chair for the fourth film; STAR TREK IV: THE VOYAGE HOME. Beyond directing, Nimoy had heavy input in the story which found the crew of the Enterprise returning to Earth to stand trial for the crimes they committed in the name of bringing Spock back to life. Before they can face their crimes, however, a mysterious alien probe begins wreaking havoc on the Earth. Coming to the conclusion that the probe is searching for humpback whales (which are extinct in the film’s version of the 23rd Century),  the crew travels back in time to the present day (1986, when the film was released) to find some. They eventually succeed, but not before changing history in a few ways.

Upon its release, THE VOYAGE HOME was the most successful STAR TREK film (and remains one of the most successful when accounting for inflation) and it’s easy to see why. The film blends the type of sociopolitical commentary STAR TREK is known for and combines it with a heavy dose of humor and then-relatable mid-80’s San Francisco. The secondary cast, perhaps energized by the chance to work their comedic chops, all give game performances. In addition, the film’s ending which sees the crew awarded a new version of the Enterprise, is one of the more genuinely moving moments in the whole series. 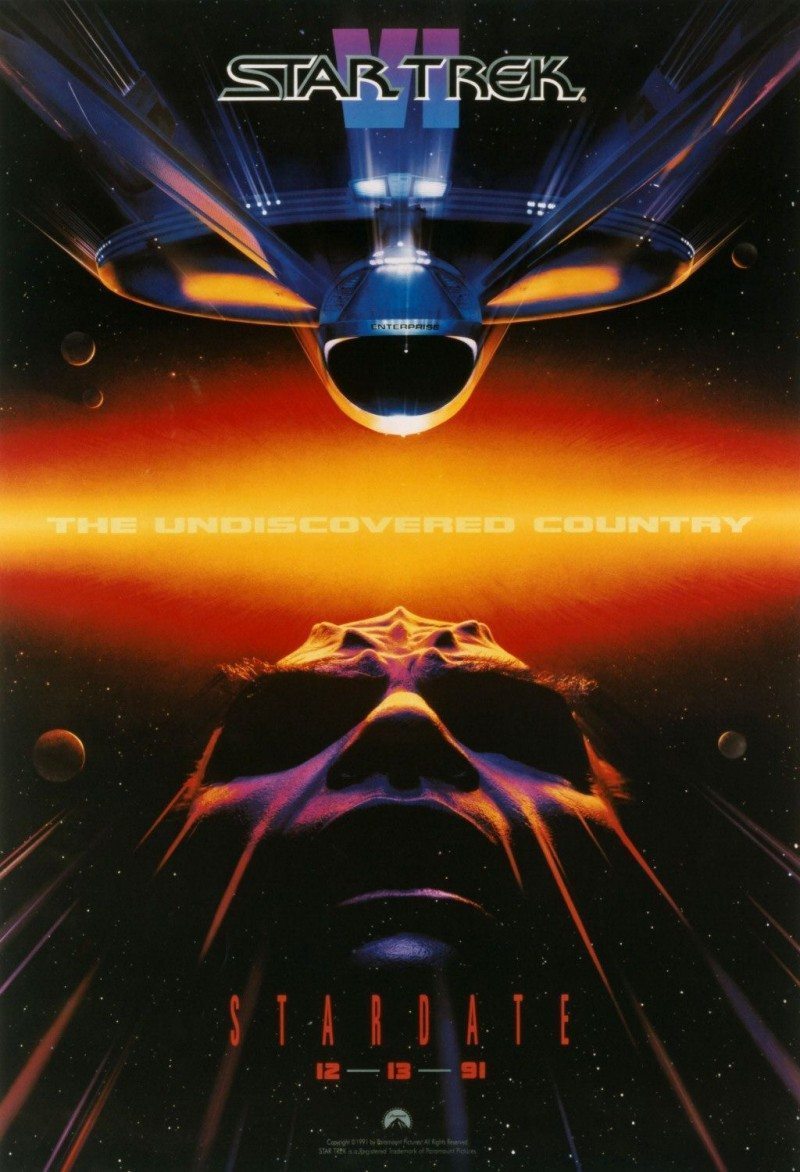 The final cinematic journey of the original STAR TREK cast is also their best. THE UNDISCOVERED COUNTRY follows the crew of the ENTERPRISE-A as they’re assigned one final mission before retirement: escorting the Klingon Chancellor to a peace conference. Most of the crew is aghast at this, including Captain Kirk who blames Klingons for the death of his son (as seen in THE SEARCH FOR SPOCK), however they make their best attempt at being diplomatic. Things quickly go south as the Chancellor is murdered and it appears that the Enterprise crew is responsible. Captain Kirk and Doctor McCoy are arrested and sent to Klingon prison while the rest of the crew races against time to get to the bottom of the conspiracy before the peace talks fail.

Nearly a decade and three films after directing THE WRATH OF KHAN, Nicholas Meyer returned to direct this sixth installment and did a tremendous job. For years, TREK had used the Klingons as an analogy for the Soviet Union, and Meyer and the rest of the creative team followed that lead by transposing the then-recent end of the Cold War into the STAR TREK universe. The film is a tightly plotted, beautifully shot war movie with a genuinely surprising twist. It provides a great send-off for the original cast and features perhaps my favorite line in the history of the franchise: “You have not experienced Shakespeare until you have read him in the original Klingon.” 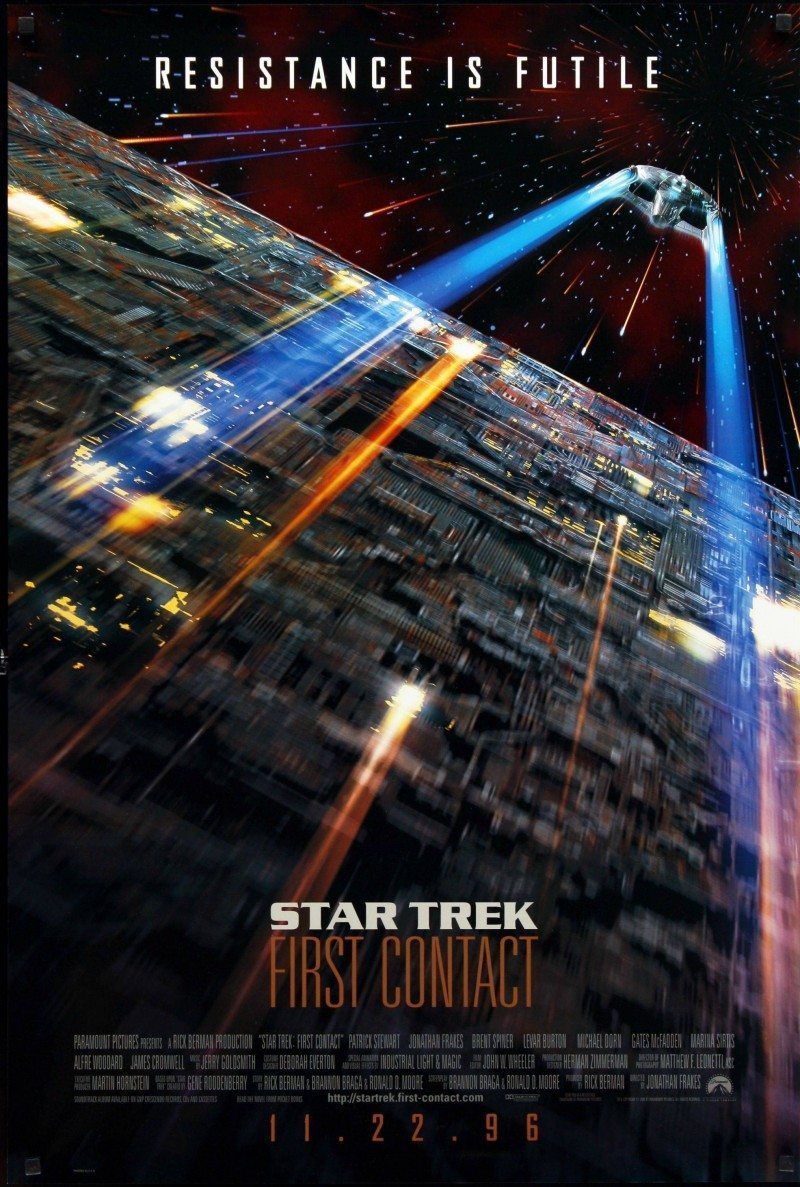 Two years after the muddled GENERATIONS, the STAR TREK: THE NEXT GENERATION cast returned for their second film and it proves to be a great one. The film begins with the ENTERPRISE-E crew patrolling an inconsequential area of space while the rest of the fleet battles a Borg invasion. Picard’s crew has been kept out of the fight due to his previous capture and assimilation by the Borg (in the classic TNG two-parter BEST OF BOTH WORLDS). When it becomes obvious that the Federation is losing, Picard and the crew enter the battle and quickly put an end to it. However, a contingent of Borg travel back in time to assimilate Earth at a weaker point (the mid-21st Century, where in Trek canon the world has been decimated by a Third World War) and the Enterprise follows. Once they arrive, the crew realizes that the Borg have crippled the launch of the first human ship to travel at warp speed that led to humanity’s first encounter with an alien species. Half of the crew heads to Earth to repair the ship in time for First Contact, while the rest remain on board to deal with the Borg Queen and a remaining infestation of drones.

STAR TREK: FIRST CONTACT was the perfect STAR TREK film at the perfect time. The franchise had reached its zenith in 1996, celebrating its thirtieth anniversary with two series (DEEP SPACE NINE and VOYAGER) on the air and hundreds of conventions across the world. In that climate, writers Ronald D. Moore and Brannon Braga rebounded from their GENERATIONS effort with an action-packed, yet character driven installment that took the very best of Trek and tweaked it to appeal to mainstream sensibilities. The first warp ship/Zephram Cochrane storyline is pure STAR TREK, with the power of futurism and optimism defeating cynicism. Meanwhile, the plot of Picard, Data and co. fighting the Borg in the bowels of the ships essentially plays like DIE HARD in space and is as action-packed as any normal summer blockbuster. Perhaps most impressively, the film is totally welcoming to new audiences while at the same time being heavily steeped in Trek-lore. 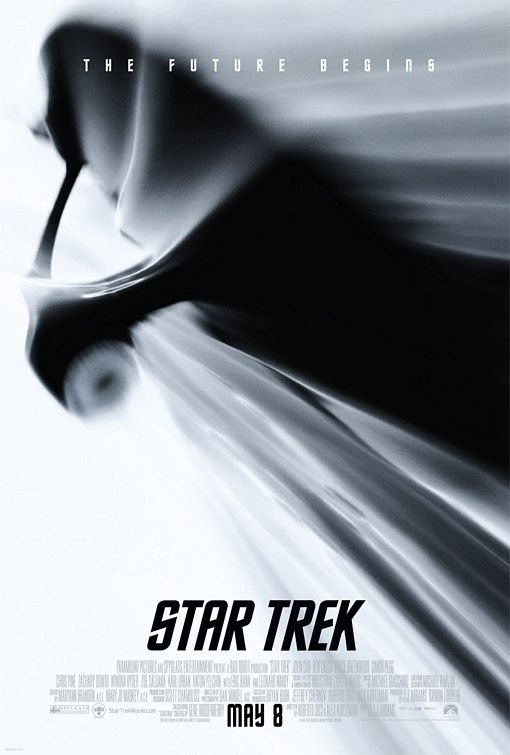 Following the critical and commercial failure of STAR TREK: NEMESIS in 2002 and the cancellation of ENTERPRISE in 2005, Trek went into hibernation for most of the 2000s. That is, until director J.J Abrams and his Bad Robot cohorts relaunched the franchise in 2009. The film branches off into an alternate universe from the main timeline, now known as the Prime Universe, and deals with the first meeting and mission of the original Enterprise crew. They do battle with Nero, who chases Prime Universe Spock into the alternate reality, seeking vengeance. Along the way new versions of Kirk, Spock, McCoy and the rest are first introduced to each other and must learn to gel as a successful unit.

I can already hear the calls of “blasphemy” being hurled at me, but I honestly believe that the launch of the Abramsverse is the best Trek film. For starters, I love that film isn’t the the reboot many feared it would be. Instead it’s simply an alternate universe tale, the type Trek has told many times over. Beyond that, the cast is fantastic. Every actor does a fantastic job capturing the essence of their character while avoiding doing a direct impression of the original cast. Zachary Quinto as Spock particularly steals the show as he gives a performance that stands toe to toe with Leonard Nimoy, the only previous Trek actor featured in the film. The updated production design works for me as well, especially the redesigned Enterprise.

Well there you have it, the definitive (in my mind) ranking of all twelve STAR TREK films. Be sure to drop a comment below or contact us on Twitter to tell me if you agree or if I’m crazy. While you’re there, let us know if you’d like to see more STAR TREK coverage on ComicsVerse.