Disney’s MOANA is coming to theaters soon and I have gone into full Disney music mode. My speakers have exclusively been blaring my favorite Disney classics, and my roommates are getting a bit irritated. So, to give them a quick break from “I’ll Make A Man Out of You,” I decided to definitively rank the best Disney songs. No, that’s too easy. Let’s make this more interesting. This is the 64 team tournament bracket to decide once and for all what Disney’s best animated song is.

The rules are as follows:

Let’s start with a nice little pump up video that displays Disney’s greatness. Watch the whole thing to get the feels… 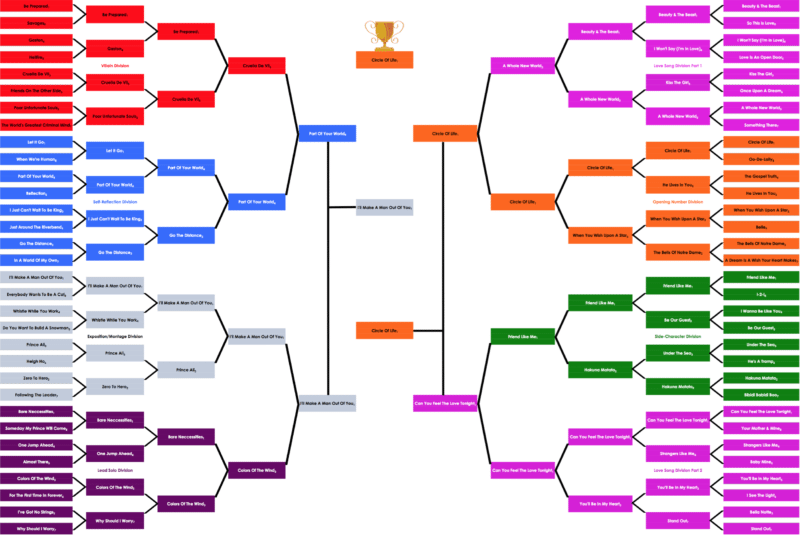 First up is the Villain Division:

While an argument can be made for all four of the semi-final songs in this division, “Cruella De Vil” manages to maintain its recognition, even though it’s from an older film that is lesser known to younger generations. Its creepy tone prepares you for the devil herself, simply by repeating her name sends shivers down your spine. Songs like “Be Prepared” and “Poor Unfortunate Souls” are helped by burning visuals; however, “Cruella De Vil” manages to invoke the same fear with worse animation. That is a true testament to its quality.

Next is the Self-Reflection Division:

“Let It Go,” while uplifting, fails to grab listeners’ emotions in the way that our two finalists in this category do. This one came down to a flip of a coin as “Go The Distance” is such an uplifting number. But, when it comes to self-reflection, it is tough to top the heartfelt number from THE LITTLE MERMAID. Ariel looks into her own soul where Hercules is simply motivating himself through exposition.

Everyone loves a Montage Division:

This was one of the easier brackets with “I’ll Make A Man Out Of You” sweeping the votes. It is a near perfect montage song. Watching the mental and physical progression of Mulan and her friends makes her eventual victory that much more sweet. She isn’t a character is just naturally great at everything, she has to earn everything by working hard. This song lyrically describes this as the drums drive the suspense.

Lyrically, “Colors Of The Wind” is one of the best Disney songs. Its message is beautiful, too! While there were many great songs in this division, it came down to the importance of the song to the film. “Bare Necessities,” while a catchy tune, lacks the importance to the plot that this POCAHONTAS hit has.

Now to the other side of the bracket, the Love Song Division: Part 1:

Talk about a Sophie’s Choice… Two Academy Award-winning songs, but only one can move on. “Beauty And The Beast,” aka “Tale As Old As Time,” is such a beautiful song. But, it takes two to tango, and the magical duet from ALADDIN is two voices serenading one another into love. It was a tough 4-3 vote.

We should have started with Opening Number Division:

“When You Wish Upon A Star” is a classic song, but it is less of a classic opening number. Many people may not even know it was the opening number from PINOCCHIO. That’s why the iconic LION KING song that we only kinda know the words to, but can’t help but chant along, takes the cake.

Let’s let the sidekicks shine with the Side Characters Division:

Again, it came down to four great options. But ultimately, when you think about Disney’s iconic sidekicks, no one stands out more than Robin Williams’ Genie. You’ve never had a friend like him. Even the animators didn’t know what to do when he hit the recording booth.

Another top two between Academy Award-winning songs. This one was so difficult and again, was a 3-4 vote. “Can You Feel The Love Tonight” took it by a hair; however, you are welcome to argue in the comments for the other side and no one would question you.

And The Winner Is…

Of course the best JUNGLE BOOK song is also one of the best Disney songs ever. Even Bill Murray can sing it and it will still be enjoyable. If you really think about it, this song was the original “Hakuna Matata,” urging characters to forget about their worries and their strife. With such a happy message the “Bare Necessities” is one of the only reasons that THE JUNGLE BOOK still holds up.

This masterpiece of an underwater orchestra is arguably the most catchy of all the Disney tunes. “Under The Sea” rightfully won Best Original Song in 1989. Sung by the always cautious sidekick to Ariel, Sebastian the Crab, this Jamaican island banger can hype up any party.

Need a motivational song? It’s hard to top this one. Even Michael Bolton needed to sing a version of it, but let’s be honest, the Disney original is best.

How can you not sing along to this classic? The only reason it didn’t win the Academy Award in 1994 is because it was just one of three LION KING songs nominated. With the concept of moving forward, even during the worst of times, this song’s message will always be applicable to real-world experiences. It means no worries for the rest of your days…

This song is self-reflection at its finest. Beautiful vocals and lyrics allow viewers to fall in love with the strongest Disney princess ever. Without this song to add another layer to Mulan’s character, she would end up being very one-dimensional and less compelling.

Phil Collins made a masterpiece here and with the rest of this film’s songs. Winning the Acadamy Award for Best Original Song in 1999, “You’ll Be In My Heart” is one of the most beautiful and touching songs not only for Disney, but ever.

While it’s been overplayed, this song is a near-perfect “Disney-esque” song and should easily make the top 10 no matter how much we hate to hear it again. The 2013 Best Original Song winner earns a shout out to the wickedly talented Adele Dazeem.

The best training montage song since “Eye of the Tiger.” Maybe even better… It tells a story, it shows character growth and you cheer with excitement in the end when Mulan finally succeeds along with her new friends.

This is the most iconic song from POCAHONTAS and it is also one of the best Disney songs lyrically. So much meaning fit into such a beautiful song. Best Original Song winner in 1995!

6. “Can You Feel The Love Tonight” – THE LION KING

This song is love… Such a catchy tune that it fits into the film without even being sung by a character. It’s also the 1994 winner for Best Original Song, beating out other LION KING tunes “Hakuna Matata” and “Circle of Life.”

5. “Part Of Your World” – THE LITTLE MERMAID

The ultimate song for outsiders. This Ariel solo gives much needed depth to the character. With its beautiful vocals and message, everyone can relate in some way, mermaid or otherwise.

4. “Beauty And The Beast” – BEAUTY AND THE BEAST

It’s a tale as old as time, it’s the staple of an iconic film and it’s beautifully written, composed and sung (sung by Angela Lansbury). The 1991 Academy Award Winner for Best Original Song is classic, iconic and easily top 5.

The most romantic Disney song ever and the best song in ALADDIN (which has one of the best Disney animated musical soundtracks ever). It won for Best Original Song in 1992 and is also the best Disney karaoke duet song of all time.

This opening number is an Academy Award winner for Best Original Song (1940). It’s also probably the most iconic of the Disney songs, enough so that it plays during the Walt Disney logo during every Disney movie. That’s like being Jerry West on the NBA logo…

From the first chant of “Naaaaaaaa” to the final drums and the LION KING title, this song is iconic, beautiful and all around perfect. It sets the tone for the best Disney animated musical ever and it won the bracket above. Though it lost out on the Oscar to a fellow LION KING number, it has gone down in pop culture history as one of the greatest of all time.

I won’t bother to put in songs from THE LION KING, HERCULES or ALADDIN because I assume you have seen those films and know their songs. But here are some others you may like!

And a new one from Disney’s MOANA:

Agree? Disagree? Let’s all be friends and discuss in the comments. Don’t forget to voice your opinion and vote on the bracket above!