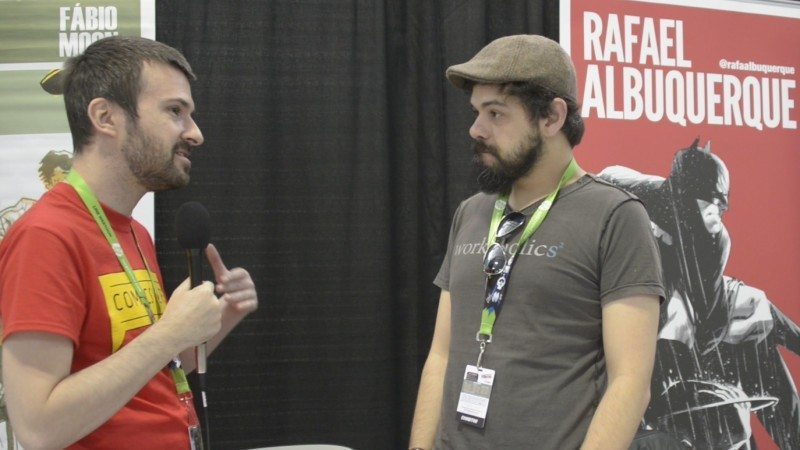 Day two of New York Comic Con 2015, and while it’s early morning, the crowds are eager to get in. Already people are eager to speak to their favorite artists, and fortunately for Comicsverse, we beat them to the post. Rafael Albuquerque was setting up for the day when we got to talk to him. He was very generous with his time.

Rafael is known for his art, with runs on ANIMAL MAN, SUPERMAN/BATMAN and BLUE BEETLE for DC, he has also co-created AMERICAN VAMPIRE with Scott Snyder for Vertigo in 2010.

However, earlier this year, he has broken out of the artists’ mold and co-wrote with Mike Johnson, the time traveling epic ‘Ei8th’ for Dark Horse. He also is on art duties, where he uses color in such a way that it becomes a useful tool in differentiating time periods. ‘Ei8th’ is intense, powerful, fun, and more than a little wibbly wobbly timey wimey. The first arc is five issues long. It’s a visual treat for the eyes. In addition, it tells a great story. During this interview, he indicates he would love to write more. I, for one, would love to read whatever else he has in store.

With this in mind, we discussed the inception of ‘Ei8th’, what went into it, what were its influences, and the potential of a second arc. Interestingly, part of ‘Ei8th’s creation comes from a webcomic called TUNE 8 which he developed in Brazil. His next project is Mark Millar‘s ‘Huck’ coming out in November, and he gave us hints of what to expect. In a world of dark reimaginings and serious superheroing, ‘Huck’ could be the tonic we need and something that harkens back to a more innocent time for superheroes.

LISTEN: We know you loved that interview with Dirk Manning from NYCC 2015. Here’s a podcast all about TALES OF MR. RHEE to go along with it!

Dedicated to his art, Rafael Albuquerque is one of the most unique and outstanding artists working today. Make sure to pick up his work, it is breathtaking.