After the potentially game-changing conclusion to last month’s issue, RADIOACTIVE SPIDER-GWEN #5 takes a break from its titular heroine and gives the title’s supporting cast some time to shine.

The events of RSG #5 take place parallel to the Green Goblin/Spider-Gwen fight that took up the majority of the fourth issue. We initially find Gwen’s father, George Stacy, drowning his sorrows at a bar. He eventually decides to take up Matt Murdock (the SPIDER-GWEN universe’s version of The Kingpin) to meet and discuss Gwen. Meanwhile, Captain America and Detective Jean discuss how the events with the Lizard Army in the third issue have changed their views on Spider-Woman’s criminal status and turned their suspicions towards A.W.O.L. SHIELD agent Harry Osborne. 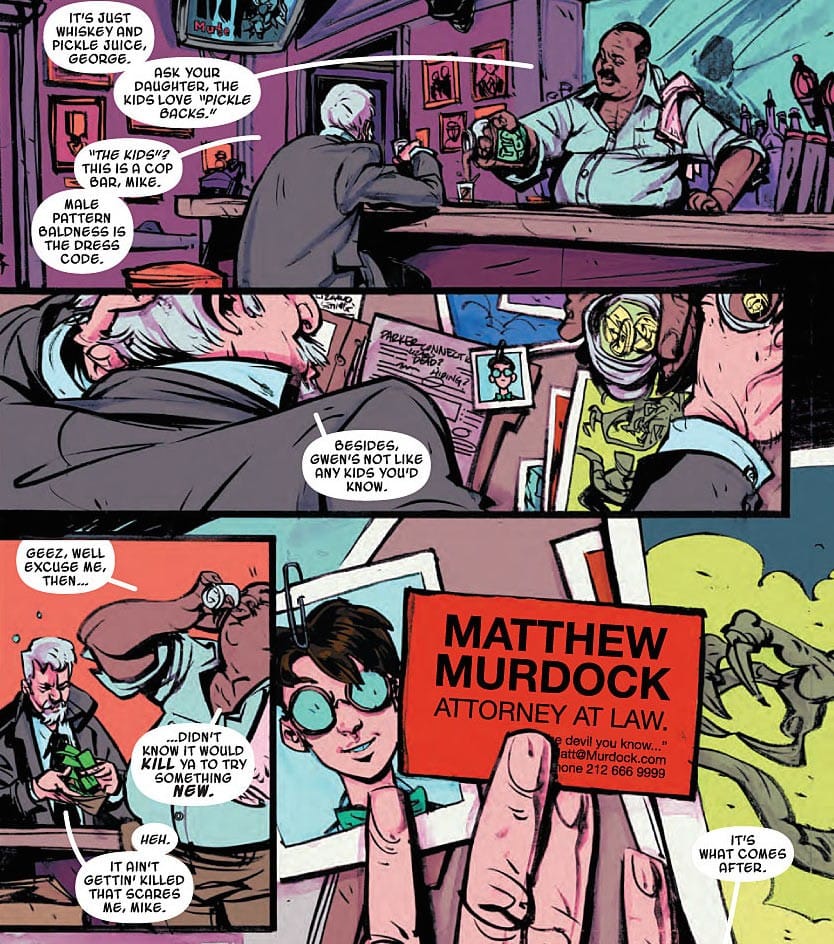 The next time we see George, he decides to meet with Murdock, and the latter reveals that he’s deduced Gwen’s secret identity. Having George over a barrel, Murdock offers him a chance to eliminate their mutual problem, Detective Frank Castle, who’s been damaging the Kingpin’s business and hunting Spider-Woman. At the same time, Captain America’s hunt for Osborne leads her through the trail of battle damage left behind by the fight in the last issue. Both these storylines come to surprising climaxes with clear ramifications for the future of the series.

READ: Catch up on previous issues of RADIOACTIVE SPIDER-GWEN here!

RADIOACTIVE SPIDER-GWEN #5 is a curious issue. After the knock-down, drag-out fight that made up issue four and ended with—one last SPOILER warning for last month’s reveal—Harry pulling off a defeated Gwen’s mask, it’s, at first, a bit jarring to not address that at all, instead focusing on secondary characters. Sure, both of writer Jason Latour’s plots in this issue are very interesting, but it’s hard to notice on the first read, as the reader’s mind—or, at least, my mind—is preoccupied wondering where Harry and Gwen are. That said, once I completed the issue, I realized just how tightly the two seemingly disconnected plots intertwined with the previous five issues.

READ: Looking for something new to read? Check out our review of I HATE FAIRYLAND here!

As far as characterization goes, the issue is a bit of a mixed bag. One of the dangers of focusing an issue solely on secondary characters, especially in a title like SPIDER-GWEN, is that those characters are by definition somewhat underdeveloped. The characters most affected by this are Captain America and Detective Wolf, as neither has had any significant development outside of their basic traits. Murdock and George Stacy fair better, though not significantly so. The issue isn’t all that damaged by this lack of characterization, as the tightly written plots and their dual ending reveals are entertaining enough to cover it, but it does sound a bit of warning bell on just how dependent this series and its world are on the Gwen character. 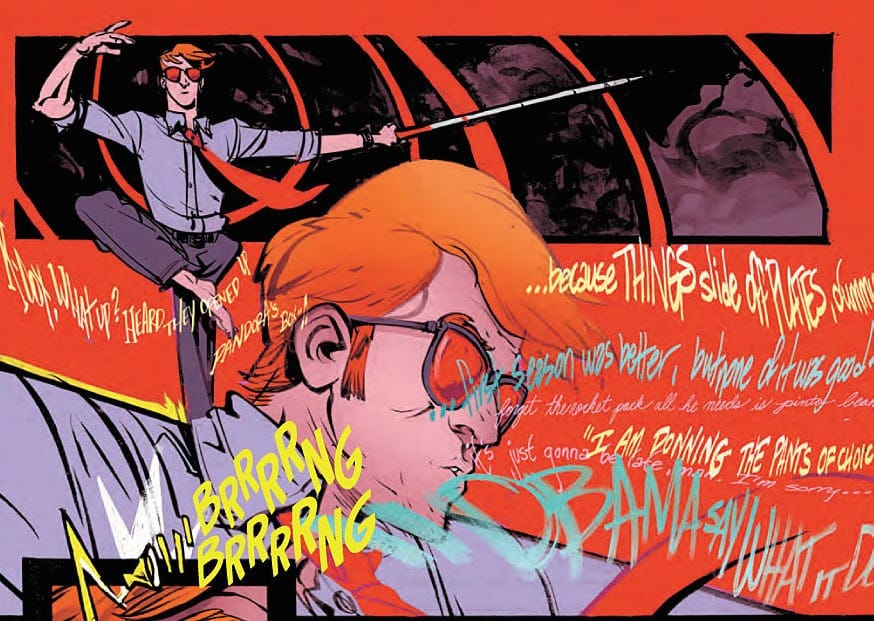 Just as I said in my review of BATGIRL #48, any time a series with a highly defined visual look features a guest artist is a tricky proposition. Chris Visions does a commendable job pinch-hitting for Robbi Rodriguez by not trying to emulate the latter’s style in the least. Instead, he employs a cramped, almost claustrophobic approach and keeps the issue moving at a brisk pace through his panel work

RADIOACTIVE SPIDER-GWEN #5 definitely breaks the norm of the SPIDER-GWEN series for the better, though I would recommend giving it two reads to really get full enjoyment out of it.