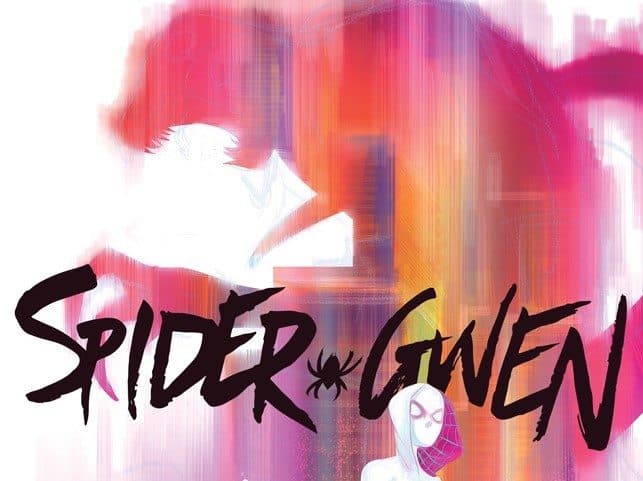 The brewing conflict between Gwen Stacy and Harry Osborn established last issue comes to a head in RADIOACTIVE SPIDER-GWEN #4, as Spider-Woman and Green Goblin  battle across the skies of New York.

Last month’s issue of SPIDER-GWEN ended with a recently returned Harry Osborn vowing to Gwen that he was going to avenge Peter Parker by killing Spider-Woman, and this month’s begins sometime later. Gwen is on the run from Harry and a group of robots, all of whom are wearing Goblin armor and riding gliders. Spider-Woman attempts to reason with Harry (who’s going by Green Goblin) and explain her side of the story regarding Peter’s death, all the while internally debating whether she should reveal her true identity to him.

The issue then jumps into a flashback detailing that “green goblin” was actually a derogatory term used by others in their high school to mock Harry, referencing his family fortune and socially awkward ways. Peter, attempting to make light of the situation, crafted a Green Goblin Dungeons and Dragons character for Harry. However, the gift backfired, leading to a massive argument between the two.

READ: Check out our True Believers profile on Spider-Gwen.

Flashing back to the present, we find that Gwen has dispatched the goblin-bots, and she once again begins trying to reason with Harry. When that fails, the two engage in hand-to-hand combat. Gwen seems to have the advantage, until her overconfidence makes her susceptible to a pumpkin bomb blast, knocking her unconscious. When she awakens, she finds Harry standing over her ingesting a vial of Peter Parker’s Lizard serum, vowing to use it as “Peter’s hand striking from behind the grave” to eliminate her. The issue ends with Harry unmasking Gwen, shocked at her true identity.

I have not been the biggest fan of the relaunched RADIOACTIVE SPIDER-GWEN series. While there have been some good moments (the origin of SG-Earth’s Captain America as detailed in issue two, Gwen’s conversation with “normal” Marvel Earth’s Spider-Woman in issue three), the series has overall seemed a bit directionless since its All-New, All-Different relaunch, with too many plot points floating around. That said, I thoroughly enjoyed issue four. Writer Jason Latour wisely eliminated the too-many-plots issue by  focusing solely on the Harry/Gwen conflict, which was a smart move. The fight scenes between the two are really done, and Gwen’s desperate effort not to harm her friend while at the same time realizing that she has to let go of her guilt is really heart-wrenching stuff.

READ: Like Marvel’s young female heroes? Check out our review of MS. MARVEL #2.

I really enjoyed this issue from a characterization standpoint, as well. For the first time since the relaunch, the Gwen character really feels like the Spider-Gwen I came to know and love during the early months of 2015. I especially enjoyed the two songs she sings to herself during the fight scenes (and there’s a joke in there that’s too good for me to spoil here). The flashback scenes were really well done, too, providing a much-needed window into the relationship of Peter, Gwen, and Harry during happier times while simultaneously showing the behavior that would eventually lead to Peter’s breakdown.

As usual, RADIOACTIVE SPIDER-GWEN #4 is a beautiful book artistically. Robbi Rodriguez is so at home drawing these characters and their world that he pretty much nails everything. Of particular note to me is the aforementioned flashback scene. I love the designs of two-years-younger Gwen and Harry in that scene. Both are clearly the same characters we know, but neither of them seems to have the same weight of the world on their shoulders.

RADIOACTIVE SPIDER-GWEN #4 is a return to form for the series, easily the best issue since the post-SECRET WARS All-New, All-Different Marvel relaunch. I would definitely recommend it to lapsed fans of the series.