We’re not in Blüdhaven anymore. In NIGHTWING #48, Dick Grayson travels to the Isle of Harm in an effort to save his friends from the digital monster Wyrm. This island is also home to the most dangerous motorcycle race in the the universe. With the Silencer on his tail, will Nightwing be able to win this race? Start your engines and buckle up, because this is one wild ride!

Breaking The News in NIGHTWING ANNUAL #1

From Gotham to the Isle of Harm

In the previous issue, both ace reporter Vicki Vale and frontman of the Phantasm technology — Willem Cloke — were trapped in a smartphone by the monstrous malware known as Wyrm. So to save them, Nightwing travels to a small island off the coast of Ireland in NIGHTWING #48. Everyone’s here. Humans, aliens, gods, heroes, and villains. For all intents and purposes, let’s assume every creature in the DC Universe is on this island. All have gathered for the greatest motorcycle race in the universe. What’s the prize for winning this epic race? At the finish line is the Pathway Altar; a “cosmic Google,” if you will. The winner can ask any question and this techno-magical information archive will answer. Nightwing’s mission is to hack the system and get Vale and Cloke back. Just roll with it. 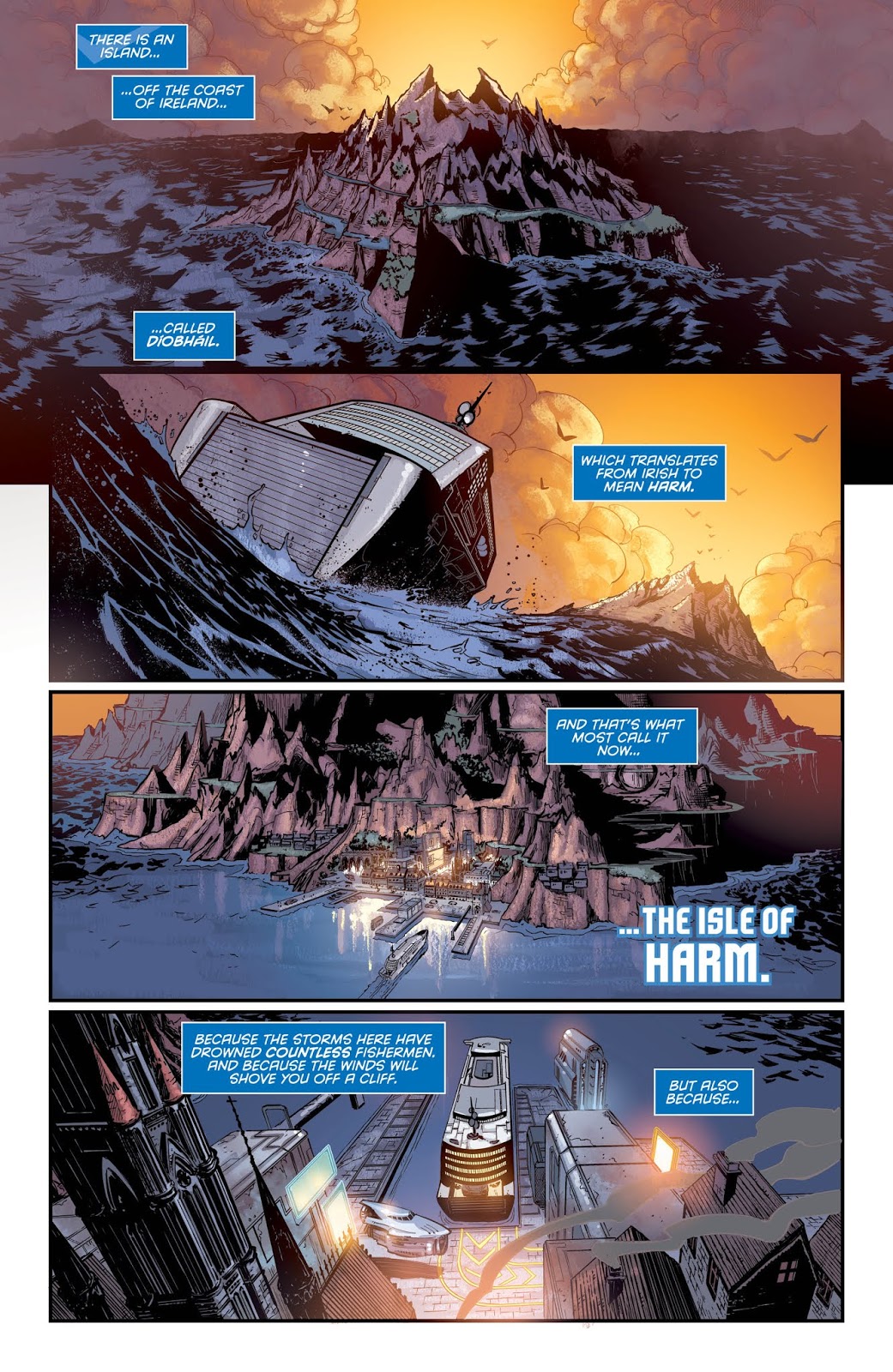 When Nightwing enters a bar filled with creatures from different worlds, the Silencer — a former Leviathan assassin — makes her first appearance in NIGHTWING #48. Using her ability to create a zone of absolute silence, she shoots at Nightwing, muting the sound of her gunshot. The bullet misses and stirs up a brawl in the bar. As of now, it’s unclear as to why the Silencer is hunting Nightwing.

Later on, the race is about to begin. When all the competitors are lined up, they reveal the answers they seek and why they’re participating in the race in the first place. Even Professor Pyg, a pig-faced foe of Nightwing, is there for some unknown reason. As the race commences, and as NIGHTWING #48 ends, the Silencer is right on Nightwing’s tail!

Too Many Wrong Turns

My biggest criticism for the NIGHTWING series has been an overly complicated plot. Why does Dick Grayson go from Blüdhaven to Ireland in NIGHTWING #48? I’m still not sure how we got here. And why is this the first we’re hearing about this all-knowing altar? Frankly, this all seems strange and convenient. Instead of a straightforward storyline, I’m left confused by the many plot points in this convoluted issue.

A Vacation Turned Nightmare in SILENCER #8

However, incorporating the Silencer into the story may benefit the overall plot. Although her appearance is random, especially on an island no one has heard of, she’s a skilled assassin who will either make a great ally or an even greater rival. So, if the cards are played right, we may just see an epic confrontation between the Silencer and Nightwing in the next issue.

The visuals do a great job of capturing the speed and the insanity of the actual race. With explosions, crashes, and riders flying off their motorcycles — along with the descriptions of the mountainous landscape — the artwork shows just how dangerous the race is. The character depictions are nice, too. All the background figures — and each challenger in the race — have a distinct look about them. Overall, the color scheme of NIGHTWING #48 is ominously dark, with a lot of moody blues and purples. I love how the Silencer’s zone of silence stands out in this comic. That bright blue really highlights her ability and exactly what she’s capable of. 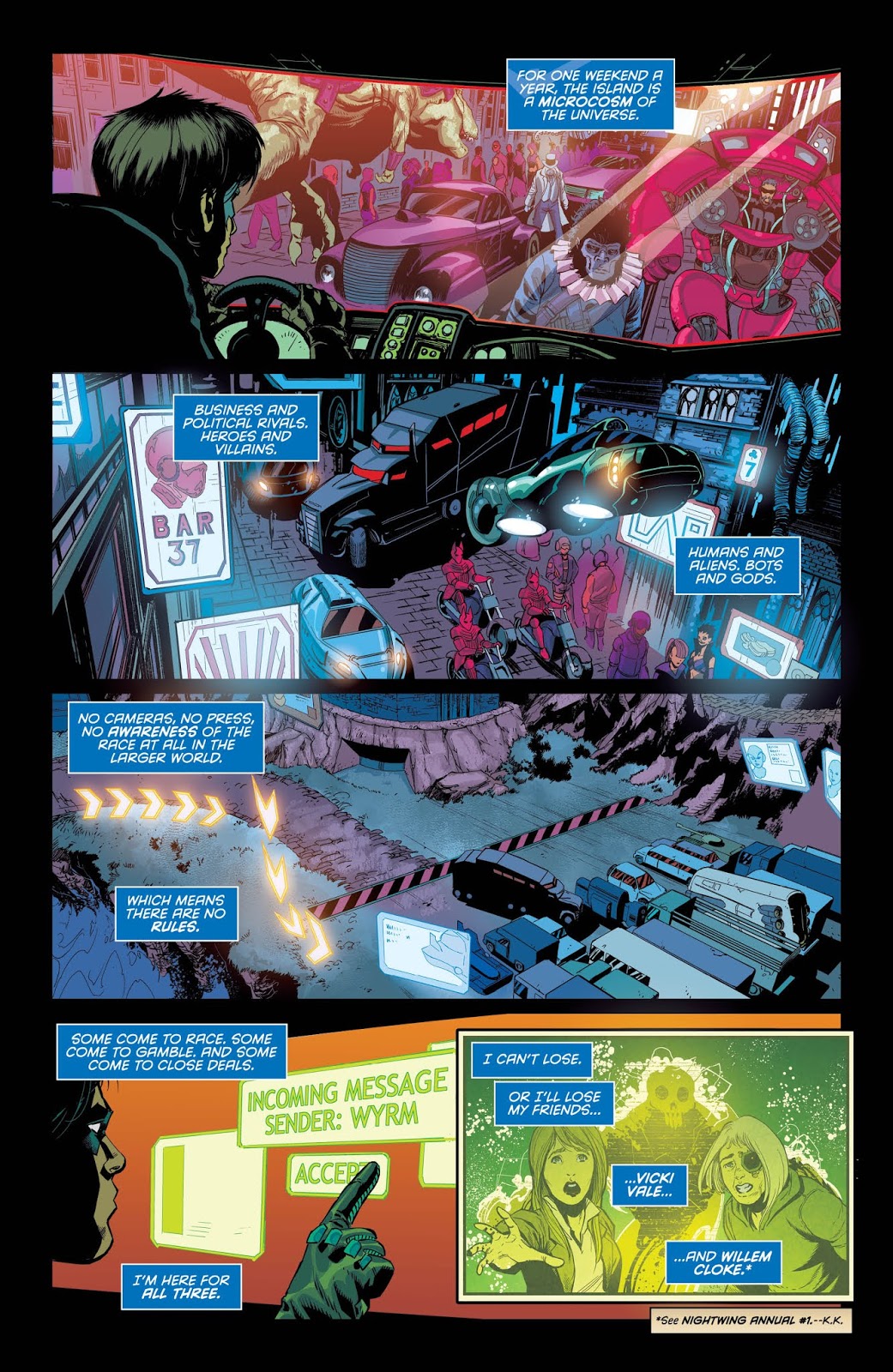 NIGHTWING #48 isn’t a bad issue. Bringing the Silencer into the story was an interesting move. She’s an awesome character. If utilized properly, she could make a great addition to the story and make things more interesting.

On the other hand, there are some downsides to this installment. Some of Nightwing’s dialogue seemed stiff and forced. As I said before, my biggest complaint has been the convoluted plotline. Since the story is just ping-ponging between different ideas, the plot suffers and becomes confusing and hard to follow. Overall, NIGHTWING #48 is a decent issue. So let’s just hope this story can get on track. Otherwise, the NIGHTWING comic will crash and burn.