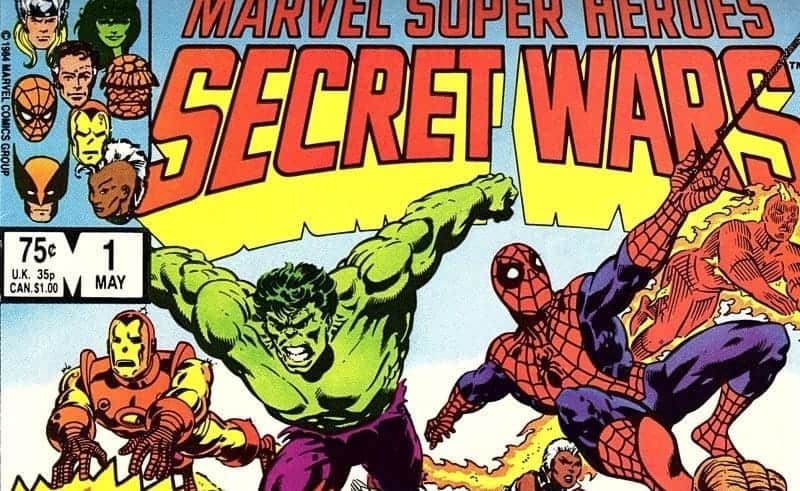 With Marvel currently in full swing of their SECRET WARS event, I thought it was only appropriate to return to the original SECRET WARS arc that preceded the current one, occurring over 30 years prior. This will not be a review of each issue individually, but rather, will choose one theme to focus on and cover.

There were several key concepts that really stood out to me throughout the entire series. These included the parallels of racism (or what is really speciesism in the context of the story) between mutants and the other heroes, unaware or blind misogyny, and man versus nature.  I also found myself reflecting upon the comic writing of the time. Again, I will not be able to cover everything that stood out, because there are 12 issues and that’s a bit much to talk about.

Something topical and relevant to our current time and culture, and one of the biggest things I noticed, was the continual use of parallels towards racisms and prejudice throughout the series.  There was also a theme of what you could describe as the “establishment” versus the “fringe” society.

Historically, the 80’s was a particularly difficult time for minorities (not that there has ever been an easy one) under the Reagan administration. Without going into great detail, this time period created deep social tension and separation between minorities and the “powers that be” that still resonates today.  The “establishment” did not make it easy for those considered to be the subculture or the minority in terms of social and cultural recognition and equality. One can do a simple Google search or read a history book, if you’d like to look at this topic in depth.

My point is that the dynamic of Avengers and X-Men directly commentates on the nation’s issues as a whole, in regards to race and culture. From the very beginning of the series, the X-Men were instantly type-cast as different and thus were distrusted, especially by Human Torch and Hawkeye. Even Spider-Man held a general unease for the mutants, and he’s probably the second biggest solo outcast and misunderstood hero-  as J. Jonah puts it, “a menace to society”. One of the most glaring examples of parallels towards racism can be seen in a particular exchange between Iron Man and the Human Torch, when trying to help Colossus:

The best part of this whole exchange, is at the time Iron Man wasn’t even Tony Stark, it was James Rhodes. It also is a great look at the idea of racism in general. A super powered human is questioning the humanity or “normalness” of a mutant, because Colossus was born differently, rather than created. Both the Human Torch and Colossus have extraordinary powers compared to normal humans yet, the Human Torch sees himself in some way as normal when compared to Colossus. One could take this example and apply it to our own world. There are individuals who view others as “less” or “different” simply because of a variance in skin color, ideology, race or religion. However, when you break things down, we are all the same exact biological beings, with very little distinction.

Another example, and one of the most powerful ones in my opinion, is Magneto. At the beginning of the series, heroes and villains are separated, but Magneto is placed in the group considered “good”.  The Beyonder (as an objective body) deemed his “desires” identical to that of the group that are viewed as morally in the right. Obviously, almost all of the heroes are ready to gang up and overpower this evil man Magneto, who was even at one point compared to Hitler, even after Magneto declares he would never hurt an innocent person (which could trigger a whole different discussion on “innocent”). Barring Ultimate Magneto, I kind of have to side with him on this one- for the most part, Magneto generally doesn’t exude characteristics of a morally evil person. Can he be a douchebag? Yes. Can he be extreme? Yes. Is he wrong quite often in his actions? Many times, yes. But to consider him a villain in the black and white sense is difficult, because he is the grey area.

The whole discussion leads directly to obvious comparisons that Magneto has always had to Malcom X. It’s easy for the Avengers (the mainstream, the social and culturally idolized, those with powers) to deem him evil or extreme. The Avengers are not being oppressed, they are propped up in society. They are not being indiscriminately slaughtered or hunted down.  The heroes are gods among men, particularly the Avengers. They are the pop stars, society’s idols and quite simply, the perfect people of the world. The Avengers don’t understand the struggle of the little guy, being automatically labeled as having something wrong with them. Don’t take this as me bashing the Avengers, but in order for my point to be made, a little bit of extreme caricaturization needs to be made.

Magneto is also not only a mutant, a group again hunted down and oppressed fictionally, but a survivor of the Holocaust as a Jew. Magnus knows the horrors of oppressed people brought to the brink, the terror of actual genocide. He has experienced hell on Earth for the simple fact he was born different, and this was before he was even a mutant. While generally preaching a separatist ideology, Magneto’s desires really aren’t too different from the heroes. He truly desires peace, but Magneto has seen what happens on the other extreme for those who are different. You could say in order for him to make up for the evil extreme, he must overcompensate in his own views and separatist mentality. Seeing “extreme” as the only way to truly protect the oppressed, who would see those in power go to extreme measures against them.

The last one example, and in keeping with this theme of oppression, comes from a dialogue between Wolverine and Captain America:

Wolverine makes some very valid points during this exchange. While Captain America ends up defending Magneto later on and displaying why he is Marvel’s “Superman” in ideology, Logan is expressing some real issues that could be applied to our own society. For starters, we are currently dealing with an issue of police brutality towards the minorities of society. “God fearing Americans” are generally protected by those in power, the police (or The Avengers). Meanwhile, the minority (or the X-Men) are generally marginalized and discredited for the real injustices affecting them. I am not preaching anarchy or bashing law enforcement; my father is a retired officer, and I’ve spent a lot of time in my youth involved in various ways within police culture. However, this does not dismiss the real problems: the discrediting of the oppression and inequality that is affecting the minorities in this country, the violence, and the lack of empathy towards the struggles minorities face.

Eventually, I would like to look at this issue on a deeper level, in a philosophy-in-comics series I will be writing in the upcoming weeks. But for now, having the ability to take these books, which were written in the 80’s, and see the direct parallels to topics of today is both amazing and disheartening. These are real issues that we can see play out in a fictional world, giving us a better look and reflection of ourselves. Was the Human Torch intentionally trying to make Colossus seem any less than a human being because he’s different? No, but unintentionally his rhetoric and the mentality he has expressed fictionally with mutants is the same issue in our society with race. Stories like this are meant not only to entertain, but to allow us as readers to critically think and look at ourselves in fictional counterparts objectively. While Torch is a hero who has saved many a person in the Marvel 616 world, we can question his motivations rationally and without emotional connection. So why is it we can’t do the same in our world? Just because someone is “good”, pays their taxes, goes to church, and salutes the flag at a baseball game doesn’t mean we cannot question their ideologies when they reflect negatively upon others- in particular, the abuses our real life “heroes” are committing, towards our real life “mutants”.

To conclude, I felt this particular overarching theme of SECRET WARS to be one of the strongest narratives throughout the books. It was a pretty typical Marvel theme of the time, especially with how big the X-Men series was during the 80s.  It began with the mutants on the outside, distrusted and kept at a distance before eventually finding common ground with the “popular kids”, or the Avengers and Fantastic Four, by the end of the series. Even if this understanding of sorts between the two big teams doesn’t last in Marvel and is always some sort of plot line, it at least comes to a peaceful conclusion in this series. Hopefully, like all stories in comics, we as readers can learn to objectively look at the stories, learn to apply these ideas to real life, and better our society through them.