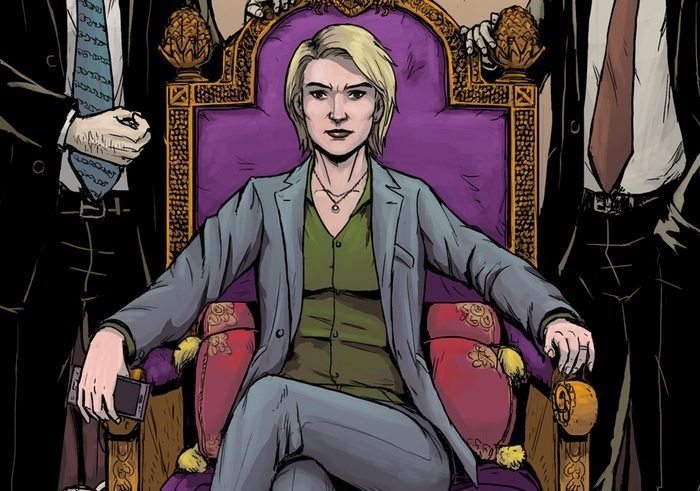 Jamie Me’s recently released comic, QUEEN #1, seems almost prophetic. Landing on Kickstarter on the British election day, then released on the 5th of November, QUEEN is about political backdoor dealings and back-stabbings. The world of QUEEN is one filled with the complex story of a government power struggle. Luckily for readers, Me crafts a masterful introduction to his world of political strife, and in doing so, creates an intriguing character in Emily Green.

QUEEN follows the life of Emily Green, the Deputy Prime Minster, in a chaotic time for both her and the nation. In the opening panel of the comic, Emily sits besides the body of the Prime Minister, a bullet in his head, a pistol laying in front of them; instantly, we are intrigued. From there, we are transported to days previous, seeing how it all led up to this point.

READ: America’s political strife and who to vote for this election.

QUEEN is filled with British political jargon (as an American, I had no idea the prime minister had a deputy), but Me is able to keep readers invested through his use of dialogue. Me never delves too deeply into the complex language, just enough to keep us interested, while keeping the story moving along at a brisk pace. Me’s writing style never simplifies anything, but also doesn’t become too complex to understand. A great example of this is during the TV news report on the government expose. Me writes the dialogue for the reporter so that all important information is given, specifically about those involved with the privatization of the National Health Service (NHS), without delving into the specifics of the corruption. This allows the reader to keep moving with the complex story, without being lost in the technical minutiae.

The story, centered around corruption in the British government and Emily Green’s dilemma, seems like well worn territory, but Me constructs a deeply intriguing and fascinating plot, laying ground work for a story of mysterious benefactors, deadly political back dealings, and moral codes versus authoritative rule. It’s clear that all is not as it seems; there are many different parties all with different interests in the political landscape, who all want to have their way.

Emily Green is a character who, in only a few pages, is shown to be a complex, troubled figure. She wants the power of the prime minister so that she can purge the corruption of her government, but also realizes that this position will come at a drastic cost. Along the way, she uses the resources she can to gain the upper hand, but is unsure of herself, anxious that the powers that put her there may not have her, or the nation’s, best interests in heart.

READ: Interview with Jamie Me about QUEEN #1!

Emily may seem like a puppet in the hands of these mysterious callers, but there is an underlying strength to her. She’s nervous as the world around her seems to crumble, but she still has ambition, still vies for the role of leader, and the authority that comes with it. We can see this power manifest through her inner-dialogue when being escorted towards the Prime Minister. She is terrified of what is to come, but she is able to get herself under control, her focus realigned with her hunger for the prime minster position. Like real leaders, like former Prime Minister Margaret Thatcher, or fictitious ones, like Frank Underwood in HOUSE OF CARDS, Emily has a powerful edge about her; an edge that could prove helpful or deadly in the long run.

Me has smartly written Emily as neither a hero nor a villain, but as a real person. She is someone who means good, but also believes “the end justifies the means”. As a reader, I am excited to see where her journey leads.

All of this intrigue and world-building would be nil, though, if it wasn’t for the crisp art of QUEEN. The art, by Bernardinus Gita and Sean Callahan, is clean and precise throughout. It matches perfectly with the tone of the story, never distracting from the mounting tension that Me creates with his writing, and allowing the reader to immerse themselves with the world.

Me burst onto the scene with his Twitter handle #ComicBookHour, and with his inaugural comic now published, he has shown he not only has skill in social media, but as a comic creator as well. Any fan of political thrillers or well-written comics should pick up QUEEN immediately. Me has shown in one comic that he can build a fascinating, complex story in only a few pages, leaving the reader excited for what is around the corner. Me is a new talent in the comics world whose world-building skills and intelligently written dialogue should be watched for in the upcoming years. The world of QUEEN is one that has just begun, with a new leadership role for Emily Green, and the numerous moral and political choices she has ahead of her. We can only wait with intrigued minds for the release of QUEEN #2.