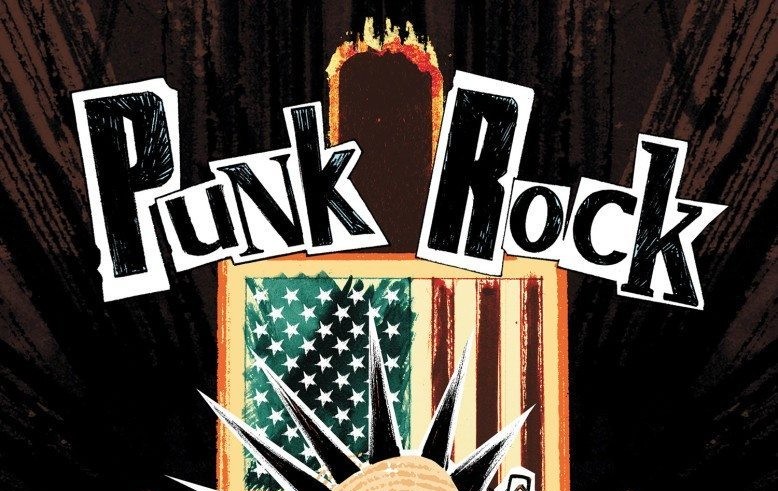 I’ve loved comics for a long time – no surprise there. But it is only by reading and poring over the art of thousands of comics that I have really refined my taste; figured out what I like and am willing to try. Many reviewers are also aspiring writers so when it comes to comics, we sometimes tend to focus more on the writing.

Today, there are more talented writers creating bona-fide classics than ever before. And I love the writing. But, for me, the art of the comic can sometimes speak many more volumes than the text. Sometimes, I get so overwhelmed by it that I forget about the story and the script. A recent example of this was TOKYO GHOST #2; probably one of the most beautiful pieces of comic art I’ve come across.

READ: Check out our review of TOKYO GHOST #1 by Rick Remender and Sean Murphy here!

I truly adore comic artists and have had the great pleasure of meeting a few. The magic behind what they create never ceases to amaze me, none perhaps more so than Sean Murphy. I first discovered Murphy when I read Scott Snyder’s THE WAKE where lush detail and jagged lines were the order of the day. I then went on to read CHRONONAUTS, AMERICAN VAMPIRE: SURVIVAL OF THE FITTEST and TOKYO GHOST, cementing Murphy as one of my favourite artists.

In PUNK ROCK JESUS, Murphy showcases his talent as both writer and artist. The story is set in the not too distant future where the newest reality show ‘J2’ is setting the world abuzz. They are creating a clone of Jesus Christ with blood from the Turin Shroud. Cameras are on him 24/7 as he grows up to become the Messiah…or will he? 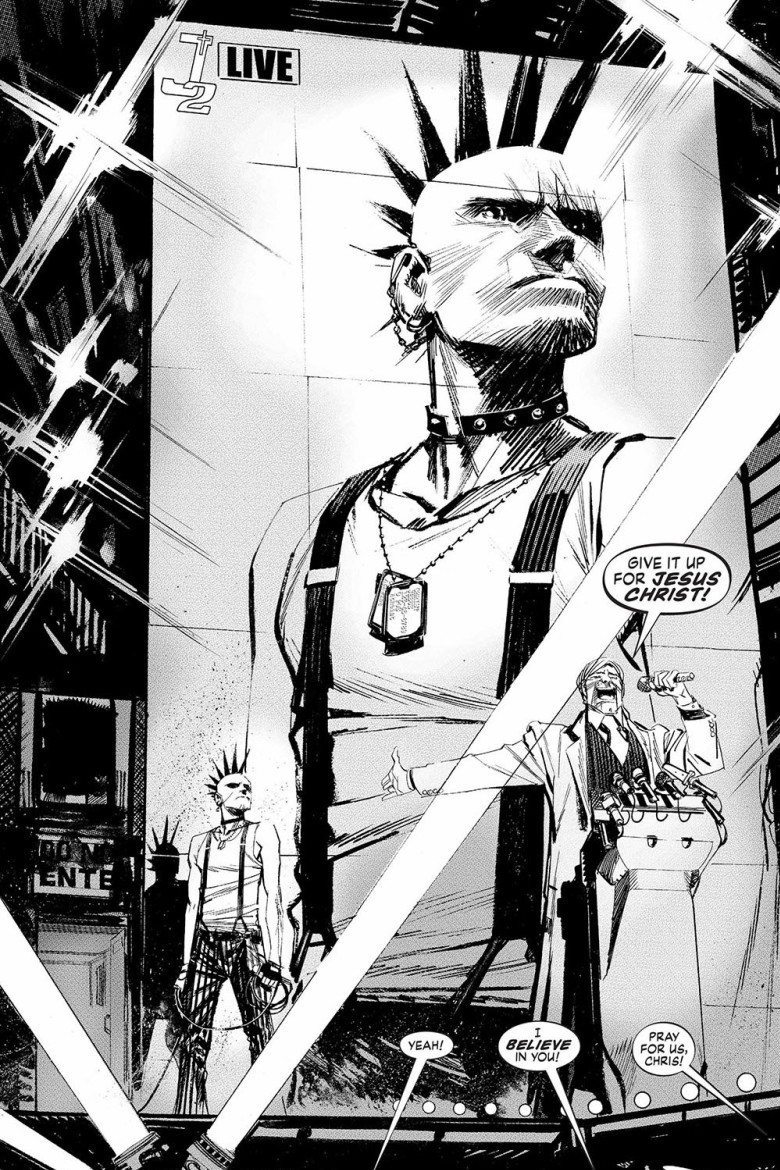 Murphy’s dialogue in this book stands up with any known writer today, and the story, both controversial and relevant, has a lot to say about religion, and how it dictates people’s lives. At times, it’s a difficult read, with some cruelty and a lot of death. The book feels dense. The dialogue is full of ideas and questions, and is quite challenging. It’s brash and bold, and Murphy touches not only on religion as an idea, but as an ideology behind war.

Much of the story follows Chris, the clone of Christ, but not too far away is his bodyguard, Thomas McKael. He grew up in Northern Ireland, and for a long time was a member of the I.R.A., killing in the name of religion, until he went, albeit accidentally, too far.

READ: Vertigo comics examines the power of the media in UNFOLLOW #2! Check out our review here!

While the writing is strong, it is Murphy’s stellar art work that takes it to another level. Here he works in black and white with detailed, powerful two-page spreads and vistas, unmatched by anyone else. This world is inhabited by angular, scratchy characters. Every panel has work behind it, and yet flows so effortlessly, the energetic art almost jumps off the page. 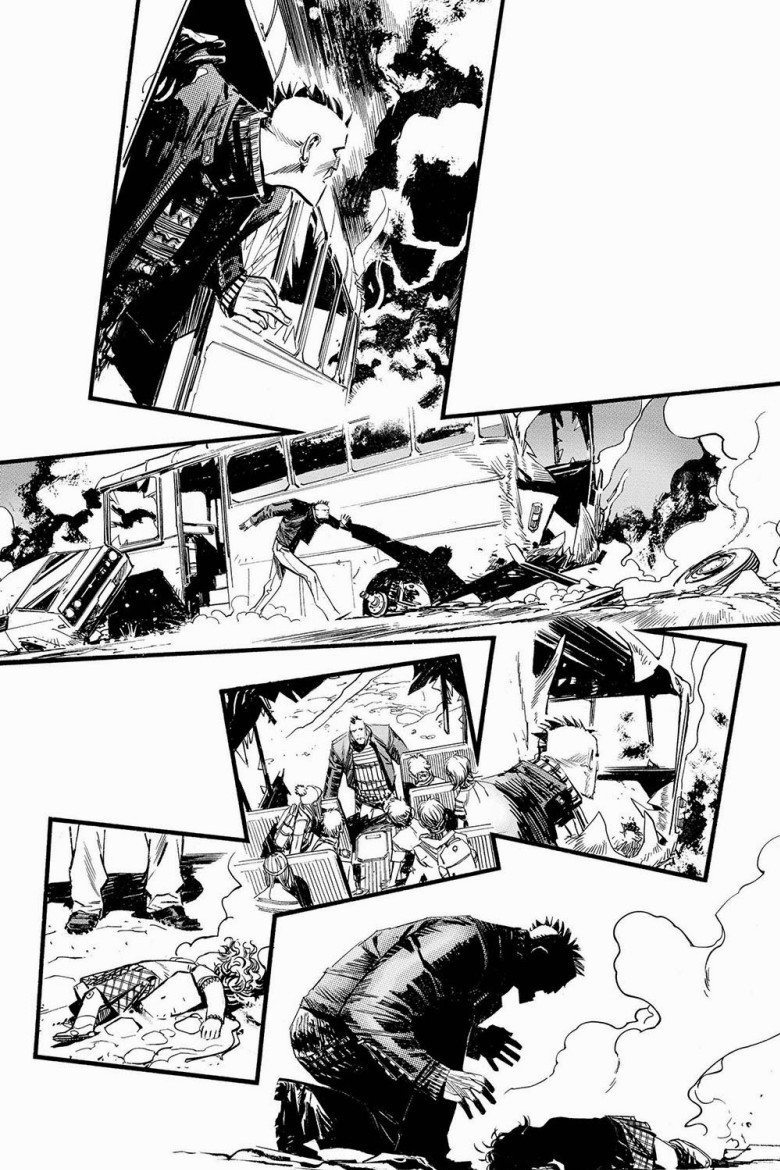 The story offers an in-depth look at corporate America. Murphy doesn’t shy away from his views, political or religious, as PUNK ROCK JESUS storms ahead. Yet at the same time, this doesn’t feel like an attempt to shock; rather the goal is to tell a good, emotional, thought provoking story.

The collection is 6 issues long, and I read it through in one sitting. It’s investing, ground-breaking stuff, and feels even more relevant than it did upon first release. There’s an honesty here that adds so much to the power of the art, and while you may not agree with all of Chris’ (or Thomas’) actions, at least you can understand them. Heart-breaking, anger-inducing, and eye-popping, PUNK ROCK JESUS is something that should be on the shelves of all comic book lovers.