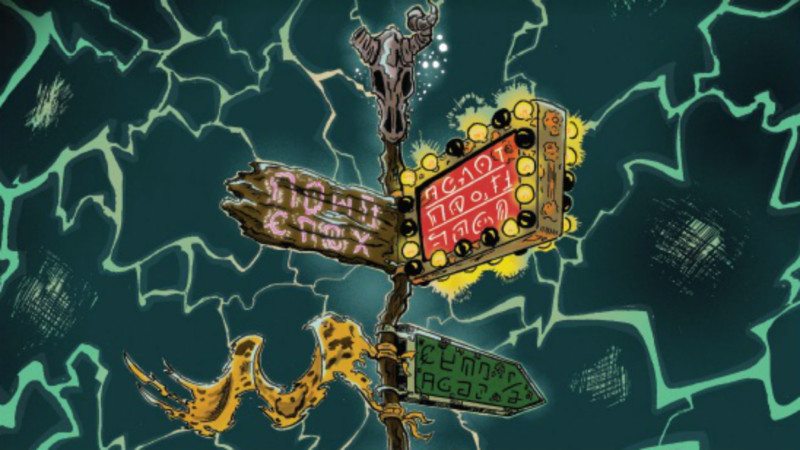 A collaboration between Irish cartoonist Seán Hogan and writers Adlai McCook, JP Jordan, and Hugo Boylan, PROJECT CROSSROADS is an anthology comic that delves into the alien, supernatural, and playful side of life. Dedicated to those who are “lost at the Crossroads,” the stories within are all about choices and where they can take us, what paths they lead us down. Sometimes they are decisions made in arrogance, a sense of entitlement, or out of self sacrifice.  The book consists of three unconnected stories, “Retired,” “Shift,” and “Ducksworth’s Last Stand.” All the stories are illustrated by Hogan, with each writer offering up a unique tale of fantasy. The artwork across the book is stylized, a different look for every story and path that a character chooses to follow.

READ: Check out our review of Hogan’s previous comic, RABBIT AND PAUL!

“Retired,” written by Adlai McCook, is about Britain’s man in black, the United Kingdom’s one man defense against alien invasion. The story focuses on this unnamed hero who enjoyed fighting the worst the galaxy had to offer. However, in his complacency, he makes the wrong choice, and the Earth ends up paying for it. In a mere six pages, McCook and Hogan manage to build a fully realized world of  space invaders and world conquering extra terrestrials. McCook gets straight into the heart of the action, keeping exposition to a minimum and letting Hogan’s art tell a compelling story. Despite the lack of splash pages usually used to convey a sense of scale and action, Hogan uses each panel wisely, and his attention to detail is evident in every image. The invasion of London, in which an enormous spacecraft looms above the city, manages to completely sell the overwhelming attack despite taking up only a third of a page. The alien designs are full of imagination, complete with mandibles, spikes, and fur. The violence is controlled but effective, blood flowing with a splash of neon color. The story’s denouement is a shocking image that is both gruesome and final. Dearbhla Kelly’s colors give Hogan’s style a gorgeous quality, the beginning and end of the story steeped in shadow, while the guts of it are bursting with color, full of greens and pinks. Kerrie Smith, a fantastic letterer in her own right, gives McCook’s dialogue between the man in black and his unseen accuser a voice. The choice of lettering and word balloons for the mysterious voice feel ominous and chilling. “Retired” is a solid entertaining entry into the Sci-Fi genre. 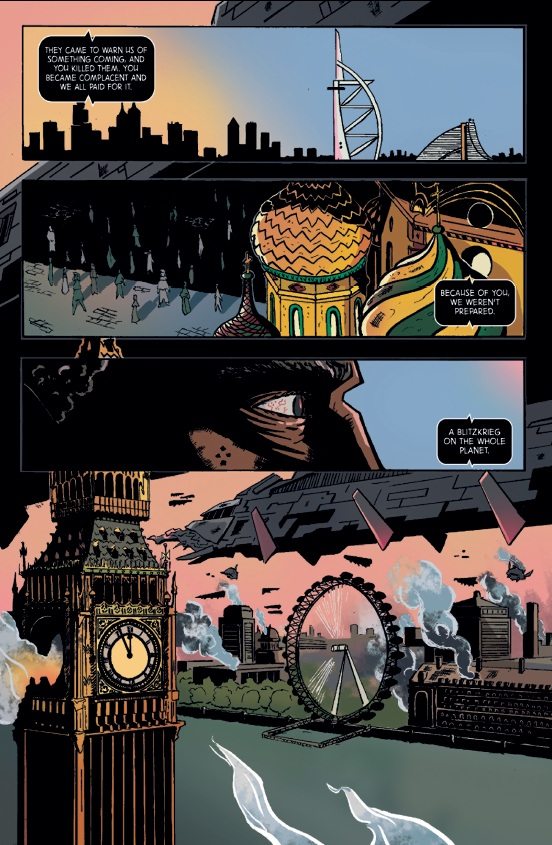 “Shift,” written by JP Jordan with art and letters by Hogan and colors by Stefanie Reville, at first seems like a story of three friends attempting to have a good night out at a house party. However, it changes from something that’s full of witty dialogue, friendly banter, and the awkwardness of being the new girl at the party into something more… terrifying. To say more about the plot itself would do you a disservice, but there is a wonderful moment of tonal shift (heh) in the story that works exceptionally well due to Jordan’s cracking script, Hogan’s use of space, and Reville’s coloring. Reville uses purples and oranges to convey a house party that is at once busy but fairly relaxed. That changes once our cast of characters leave the house to go home. Jordan’s writing is dialogue heavy, but it’s wonderful dialogue, quick witted discussion between friends that soon becomes serious. When the change in story comes, it is ominous, a hark back to those dark woods, graveyards, and moors that featured so prominently in ’80s horror. As with “Retired,” Hogan really conjures up some thrilling imagery, and in the last few pages, his style reminds me of artist David Rubín, as the shortcut home provides some chilling images. The last page of this story is gorgeous, and I could easily imagine this as a movie poster. Or just a poster. Can I have a poster? 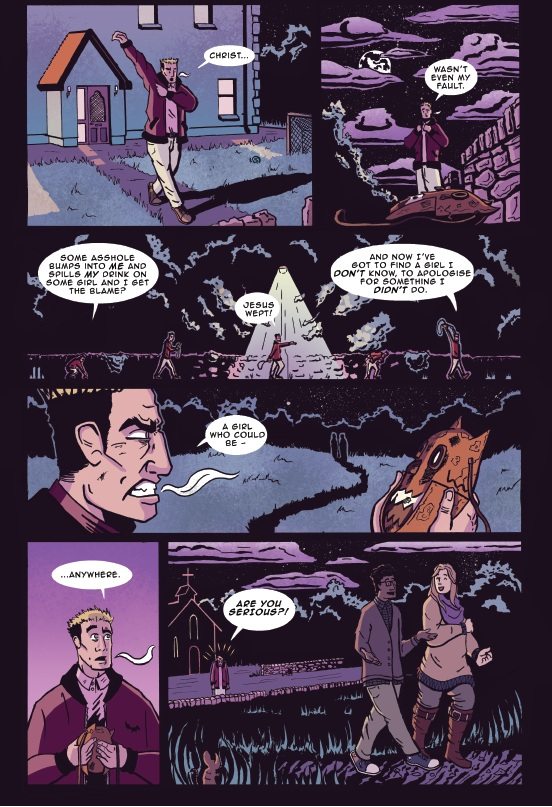 READ: We cast a spotlight on more Indie talent!

“Ducksworth’s last Stand,” written by Hugo Boylan with letters by Kerrie Smith, is the tale of one sword-wielding, muscle-bound hero, Sir Idol, and his feathered sidekick, Ducksworth. Sir Idol and Ducksworth are engaged in a climactic battle with the Dark One and his armor clad minion. The Dark One brings forth a dangerous creature from the past that not even Sir Idol can defeat. Will Ducksworth make the ultimate sacrifice to defeat this time displaced monster? “Ducksworth’s Last Stand” dives straight in, full of action, swords, and heroic ducks. Boylan’s dialogue is brilliantly cliche, full of typical comic dialogue (“Curse you Ducksworth,” “You brave fool,”) and great sound effects.  The story, like the rest in PROJECT CROSSROADS, challenges you to guess where it is going. It is completely out of left field and ends on a slightly downbeat ending. Boylan makes the switch believable, Hogan and Smith’s work make a very effective visual split in the narrative. Smith’s lettering makes the story seem louder and more bombastic (until the change in story) then she pulls back. Here she conveys the monotony of the situation well, which rang very true for me. Unlike the other stories, this isn’t colored, relying solely on Hogan’s inking and shading. The lack of color makes you focus on the artistic detail more, the black and white making each image more effective. Hogan’s imagination brings some monstrous and fantastical characters to life, and I only wish I could see more of Ducksworth himself. 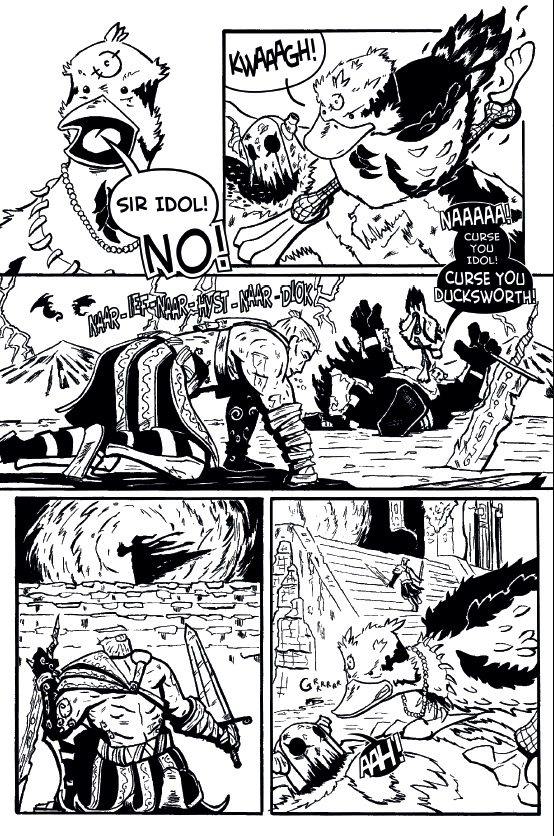 READ: Hugo Boylan writes a tale of the supernatural in our review of MALEVOLENCE!

The anthology is finished off with some concept art which is a great insight into the genesis of character designs. As an anthology series, PROJECT CROSSROADS has a nice mixture of stories, each entertaining, engaging, and with a twist in the tale. Comics are supposed to be fun, entertaining, and something that sticks in the mind long after. PROJECT CROSSROADS succeeded on all fronts, and is another positive step in the right direction for Irish comics.