Did you hear? Marvel is pitching another hero-versus-hero event for this winter. Again.

We shouldn’t be too surprised. Ever since 2005, when the first CIVIL WAR sold like tacos at a Deadpool convention, this has been the go-to story for big Marvel events. It’s not enough to see Captain America punch the Red Skull in the jaw anymore. We need to see him knock Tony Stark’s teeth out. It may be overplayed, but it sells and we can’t blame Marvel for giving the people what they want.

There’s just one big problem with this upcoming event: It involves the X-Men and the Inhumans. On paper, this looks like a diet version of AVENGERS VS. X-MEN, but people still drink Diet Coke and tolerate the taste. If it can pit another couple of superhero teams together and get the message boards going, then why wouldn’t it be a good idea? It’s working with CIVIL WAR II. So, what’s the problem? 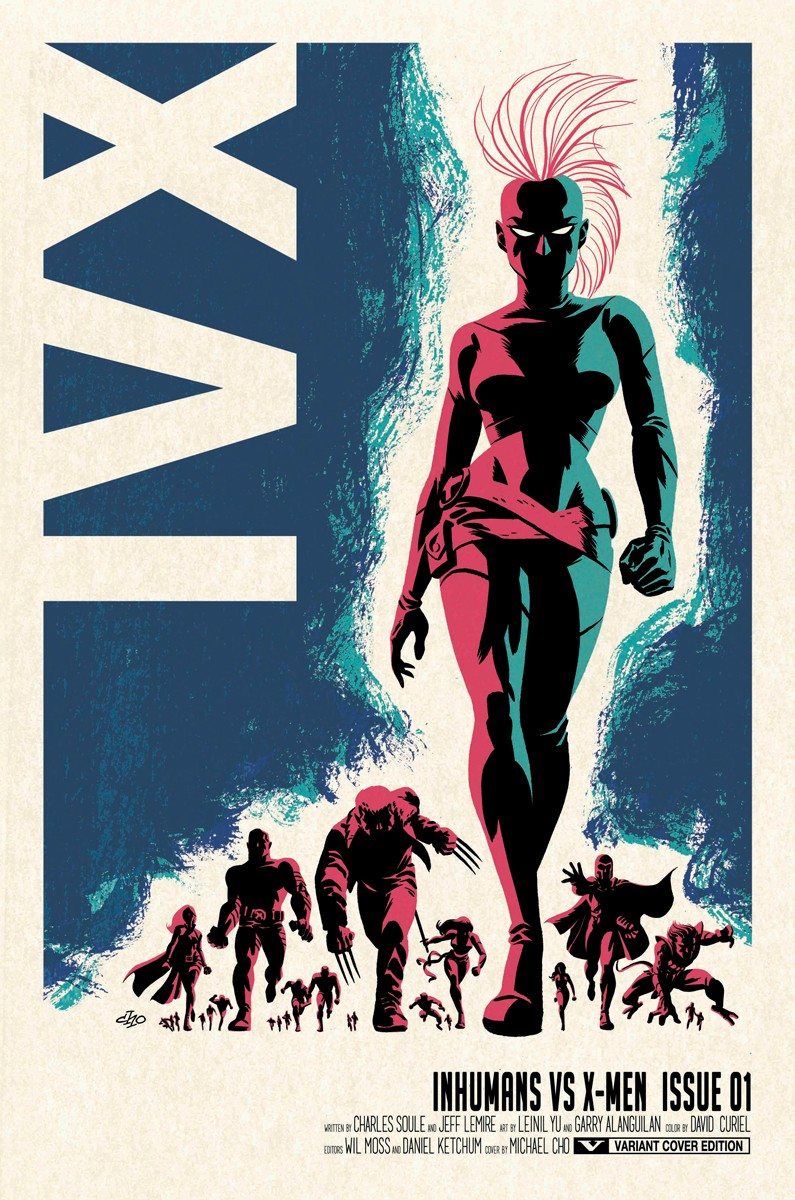 To illustrate this issue, here’s a little thought experiment. Go back and watch the first BACK TO THE FUTURE movie. Specifically, watch the scene in the diner where Marty McFly has to fight off Biff Tanner. Now, imagine for a second that Biff Tanner is given a shot of steroids, a fully-loaded AK-47, and an unlimited supply of crystal meth. That should give you a good idea of the problem with an X-Men vs. Inhumans conflict.

To their credit, Marvel is making a concerted effort to set up this clash. Since the nebulous eight-month gap that followed SECRET WARS and the excessive flexibility it allows, they’ve set up a status quo where mutants have been sterilized yet again after having just solved their last sterilization plot three years ago. This time, they have the Inhumans to thank for this. It turns out that the big green cloud that turns people into Inhumans also poisons mutants.

For some reason, Cyclops has a problem with this. Given how the solution to the last sterilization crisis landed him in jail, who can blame him? Naturally, he fights the Inhumans in an off-panel conflict and somehow screws up so badly that mutants are more hated than head lice, cockroaches, and the IRS combined.

The Inhumans, on the other hand, are celebrated and subject to zero Sentinel attacks, despite having their base near a heavily populated area. By all accounts, the X-Men have a long list of reasons to go to war with the Inhumans. At the top of the list: the fact that their sacred cloud is roaming the Earth, killing and sterilizing mutants everywhere, and they aren’t doing much about it. The only surprise is that it took this long for Marvel to make an event of it.

READ: For more on upcoming X-Men events, head to our first look at next spring’s ResurrXion!

Despite these efforts, the problem remains. There’s a fundamental difference between mutants and Inhumans from a conceptual standpoint. Those differences make it impossible, if not downright asinine, for this to be a balanced conflict. It goes back to what mutants stand for. They are, and always have been, a metaphor for minority struggles. They came about in the early 1960s, just as the Civil Rights Movement was taking hold in America. They embody the traits of the marginalized, the denigrated, and the persecuted.

That’s still a powerful message today. There are outgroups and outcasts in every era. They didn’t ask to be born in their current condition. This is just the hand they were dealt. In the same way that we can’t change the color of our skin or the gender we’re attracted to, mutants and minorities like them can’t change what they are.

Compare that to the Inhumans. They are, by their own admission, not a product of nature or evolution. They’re a product of alien science experiments. That alone doesn’t set them apart too much. However, like the disclaimer in every pharmaceutical ad, it’s the fine print that makes the details so frustrating. From a mutant perspective, and a minority perspective for that matter, these details are an affront to the struggles they endure.

It’s not enough for someone to be born with Inhuman DNA. In order for them to become what they are, they have to be exposed to a very specific catalyst. In this case, it’s the Terrigen Mists. This isn’t some unseen, unpredictable force. It’s big green cloud. It’s tangible, it’s predictable, and it sweeps through an area like fog. It does nothing other than activate latent Inhumans. It’s a convenient, if not crass, way to gain superpowers. It also makes the theme of the Inhumans the complete antithesis of mutants. 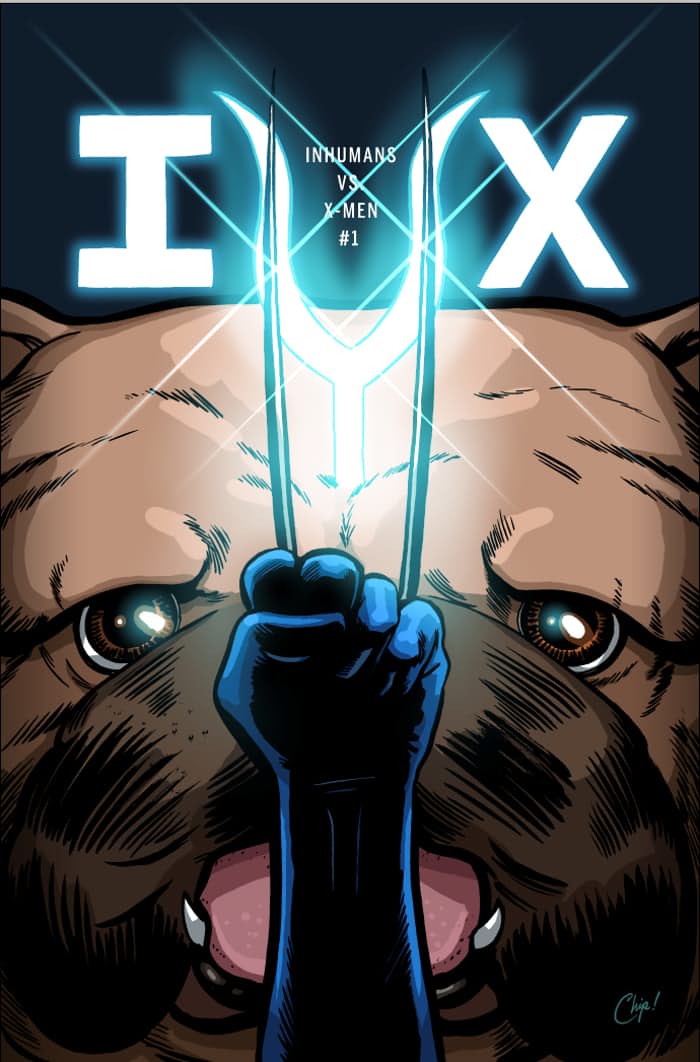 As I previously stated, mutants are a metaphor for minorities. They are born this way. Just being alive is what makes them mutants. With the Inhumans, it takes an outside force to make them what they are. As a real-world parallel, that’s like saying that it takes a specific form of trauma to make somebody gay or it takes a specific kind of mental illness to make someone transgender. These are the arguments that anti-gay protesters have been using for decades. The Pat Robertsons and Rick Santorums of the world say that nobody is born this way. They say these people have a disease that must be cured.

A mutant doesn’t have control over how and when their powers manifest. For most of them, it just means surviving until puberty. An Inhuman, on the other hand, does have some level of control. Even if they don’t know whether they carry Inhuman DNA, they can just avoid the Terrigen Mists and not take a chance. This ensures they never manifest any Inhuman powers. If a parent doesn’t want their child to become an Inhuman, they can just hide them or take them to a place where the Terrigen Mists can’t get them. The parents of mutant children don’t have that luxury. It’s completely antithetical to what it means to be a minority. It’s not something that can be avoided.

The Inhumans, as a concept, are an affront to the themes of the X-Men. Despite their differences, though, the two teams could still share certain struggles. Their powers and their ability to control them makes them different. There’s still some chance that they can relate on some levels. Unfortunately, that chance passed them by long ago.

Whereas mutants emerged all over the world within various parts of human society, the Inhumans remained completely isolated and cut off from the world for most of their history. Not only that, but they govern themselves in a manner that has one too many similarities with Game of Thrones and North Korea.

The Inhumans are not run like the Xavier Institute, where there’s a mentor who simply offers others a chance to learn and grow in a safe environment. They operate in a rigid caste system the likes of which would give Mahatma Ghandi a heart attack. There’s a royal family whose power is absolute. There’s an entire population of slaves in the Alpha Primitives. Those that aren’t slaves are still isolated from the rest of the world, immersed in a kingdom whose traditions include an inherent mistrust of outsiders and a xenophobia that Ann Coulter would find extreme.

These are the X-Men’s foes: a group of super-powered, racist, xenophobic slave owners who didn’t bother doing anything for anyone until they couldn’t stay hidden anymore. It wasn’t until the events of Infinity War that the Inhumans actually made an effort to contribute to the world. Say what you will about the X-Men and their inability to foster peace with humanity. At least they actively tried to integrate with the human race. They tried to make meaningful contributions to civilization. The Inhumans never did squat until they didn’t have the luxury of staying hidden anymore.

LISTEN: Want more on the X-Men? The team breaks down “The Dream” on the ComicsVerse Podcast!

Despite this, the Marvel Universe accepts the Inhumans as heroes. They still carry themselves as heroes. They’re still celebrated as heroes. Wannabe villains still send killer robots to attack mutant schools, but a society of racist xenophobic slave-owners? They somehow get a pass.

The very foundations of these two teams are at odds with one another. Part of what makes superhero clashes like CIVIL WAR work is that both sides have valid points. It’s possible to argue the merits of either side. It’s a little bit harder to argue the merits of a side whose traditions include racism, xenophobia, and slavery. They have to fight the X-Men, who do have a long history of helping other superhero teams and saving the world, even when it’s not convenient.

It simply can’t be an equal fight. Marvel has been trying to raise the profile for the Inhumans, albeit for all the wrong reasons and in all the wrong ways. They dedicated an entire season of AGENTS OF SHIELD to making the Inhumans popular. The problem is that they did this by trying to make them exactly like mutants. This simply cannot be done. Making the Inhumans into mutants is like making the New York Yankees into underdogs. It cannot be done logically, believably, or with a straight face.

Despite this, the Inhumans still have the advantage in one key area: movie rights. It’s a poorly-kept secret that Marvel gives preferential treatment to characters and properties whose movie rights they own. They may deny this, but how else do they explain the X-Men and Fantastic Four being absent from cartoons, toys, posters, video games, and various merchandise? What other reason could they have for going out of their way to marginalize mutants while giving extra leniency to a secret society of super-powered beings who segregate themselves from the world, maintain a rigid caste system, and only act heroic when it’s convenient? 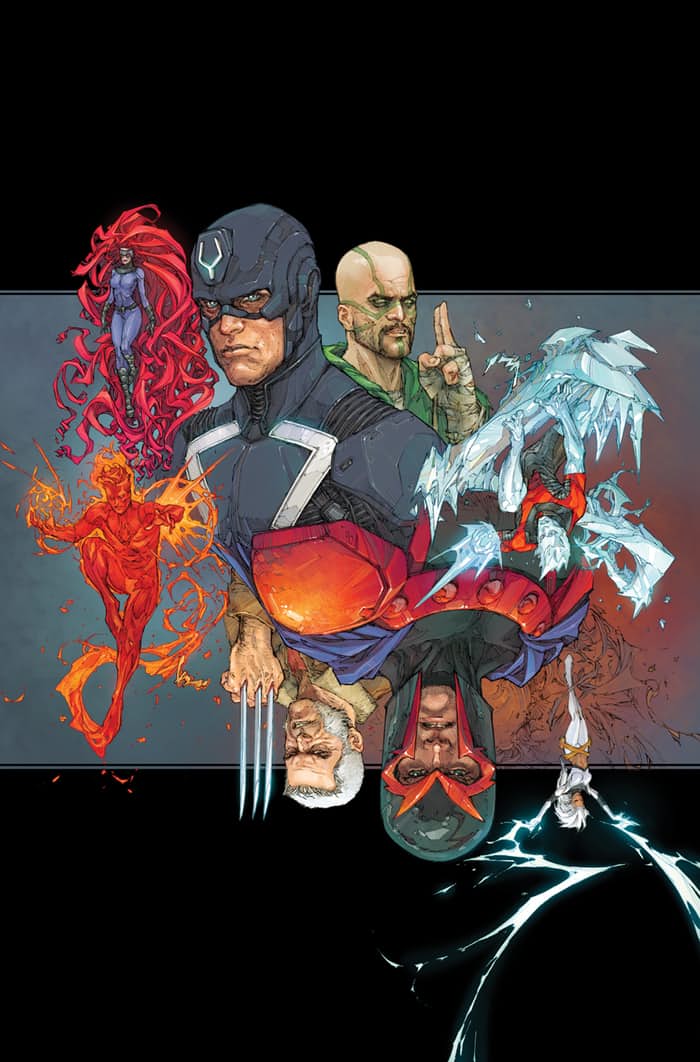 It’s debatable just how much movie rights will be a factor in Inhumans vs. X-Men. From the perspective of Charles Soule and Jeff Lemire, the writers of this event, it may not be more than a passing thought. Unfortunately, the perception has already weaved its way into the reality that message boards and paranoid comic fans form in their heads. Anyone who has been following politics during this year’s election season understands all too well just how much paranoia and perception play into debate.

Whatever the outcome and whatever the legal undertones, the concept between Inhumans vs. X-Men is flawed. On one side, you have a minority that has been forcibly sterilized twice in the past decade. On the other, you have a team with a tradition of racism, xenophobia, and slavery. It’s not a battle between heroes as much as it is an exercise in contrivance. The only way this story is going to work on any level is for the fundamentals to be contrived in the mold of Bat Shark Repellant. For the same company that gave us CIVIL WAR and AVENGERS VS. X-MEN, Marvel has no excuses.