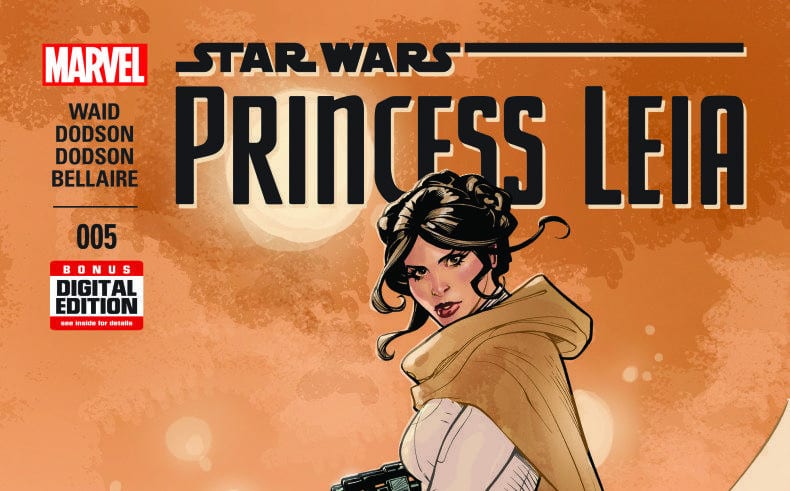 Our heroine is back in PRINCESS LEIA #5! In a daring rescue, Princess Leia Organa escapes from the clutches of the Empire yet again; but what was easy for one person may be impossible for an entire Alderaanian fleet! 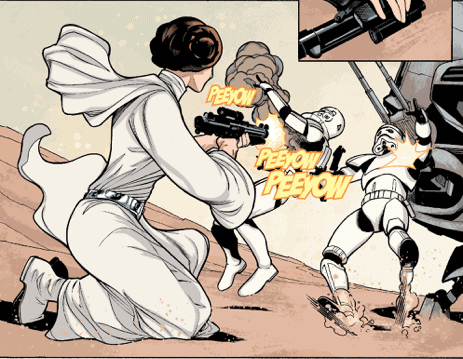 When last we met Her Highness, she was surrendering to the Empire in exchange for a single Alderaanian prisoner. A seemingly shortsighted and foolhardy move, Leia’s plan is revealed to be as bold and clever as ever: Evaan swoops in at the last moment to take out the Imperial escort and rescue the princess. With their leader safely in orbit, the Alderaanian fleet is in a hurry to Battlestar Galactica their way to a new home.

There’s only one problem: the fleet is now too big to move stealthily, and an Imperial Star Destroyer is bearing down on them! Leia’s demonstrated she’s great in a tight spot with a blaster, but with no help in sight from the planet below, Leia’s leadership skills are put to their truest test yet.

PRINCESS LEIA is without a doubt the best of the “Star Wars” titles and PRINCESS LEIA #5 is the finest example of that yet. It’s a perfect culmination of her character development and, as I felt when I read the “last” issue of SPIDER-GWEN, I was sad to see it end.

First, however, if I could level one criticism at the title, it’s the the art didn’t always live up to the storytelling. The choreography of the many action sequences—while ultimately not impossible to follow—are sloppy in comparison to the otherwise tight storytelling. I found the art sometimes too light or too soft for the story’s stakes, but, in this issue especially, the softness paid off in those moments with really high stakes: the art became grounded, effectively setting those moments apart from the rest.

PRINCESS LEIA #5 ends with a thoroughly rousing dramatic moment that actually moved me to tears. Leia steps up, willing to face a seemingly no-win scenario with poise and honor, inspiring hope in those in her charge. In a final lesson in humility, however, Leia learns that she has never been, and will never be, alone in her fight. It’s a climax that is personal, moving and intimate while still having the big, interplanetary action at the heart of the franchise. 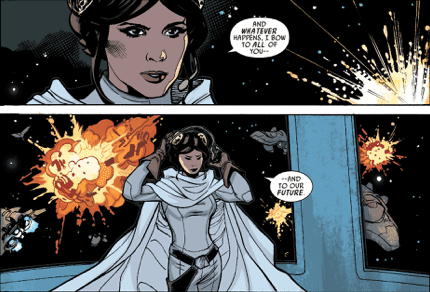 If you haven’t yet read any of PRINCESS LEIA, now is the time—I trust Lucasfilm and Marvel to release a trade paperback, so be sure to grab it. PRINCESS LEIA stands on its own really well, while also being necessary reading for any Star Wars fan.