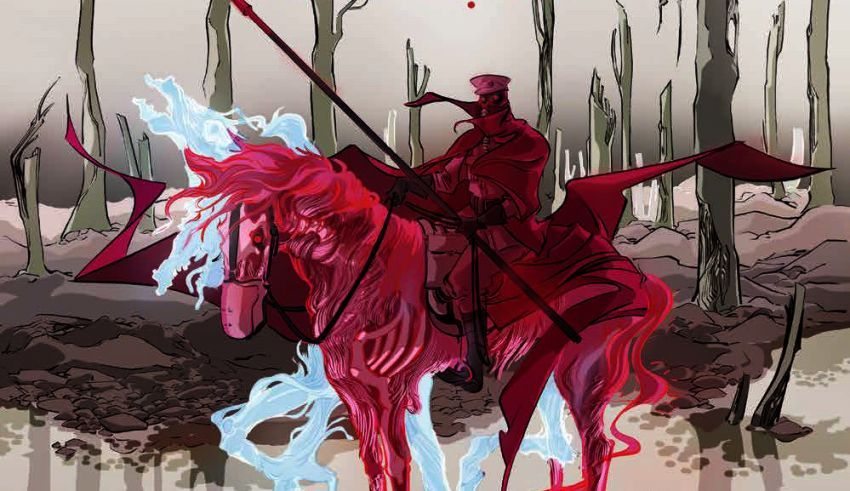 PRETTY DEADLY is finally back, and it is time to learn all about what Sissy is going to do now as the Queen of the Dead. Of course, in typical Kelly Sue DeConnick fashion that is not where we begin, so let’s lets look at where DeConnick and Emma Rios take us.

(Disclaimer: I’ve always felt that PRETTY DEADLY was hard to give summaries off because it is so steeped in storytelling as a mechanic, so just bear with me if this goes a little all over the place.) We begin with Butterfly and Bunny, as always, but this time they are discussing the orderliness and the appearance of bees. We then cut to a sad scene of familial loss as Sarah, who is now an old woman, is dying, and Fox has come to take her to the land of dead. We also get a small look at Sarah’s daughter Verine, her grandaughter Clara, Deathface Ginny, Annie, and what is sure to be a new military antagonist.

READ: Love Image? Check out our review of another one of their breakout series, ODY-C, by Matt Fraction! 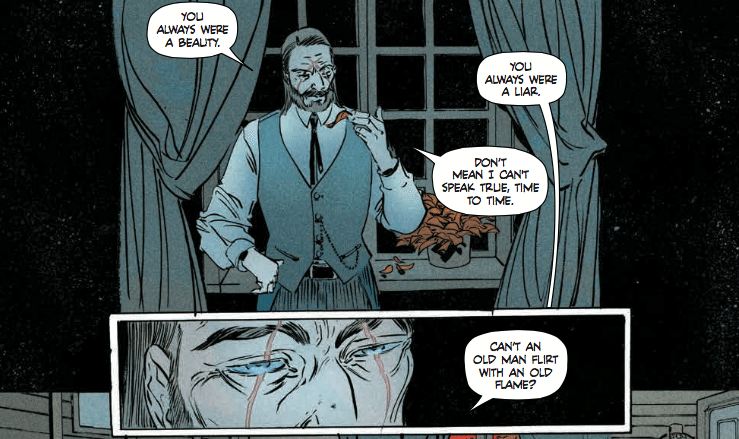 I will once again admit that my summary is not overly substantive or explanatory, but while the plot of PRETTY DEADLY is very important, the way the story is told is always more fascinating. DeConnick has stated in an interview she did with Entertainment Weekly recently that she has taken into account reader’s comments that PRETTY DEADLY was a little too obtuse and difficult to understand. While this comic is not necessarily the clearest thing I have ever read, it is definitely one of the most beautiful and artful comics I have. Much like the first arc, this comic is at it’s best when it is telling the story of the comic through an allegory. And not only is that great, but the way the pages are simultaneously splash and paneled are a fit of genius. DeConnick’s slow-burning and cryptic storytelling are made into high-art by virtue of the way that Emma Rios draws large and lush illustrations.

LISTEN: Love Kelly Sue DeConnick? Check out our podcast on her other creator-owned series, BITCH PLANET!

Because of this, certain moments within this comic really standout from both a writing and an art standpoint. Fox coming for Sarah is extremely poignant, and while it is jarring (and it took me some time to remember who exactly Sarah was) once you remember her role in the previous arc, the beauty of their interaction really hits you. This is a comic that rewards the reader for having read the previous arc and because of this, when a connection is made it is all the more gratifying. Unlike Marvel and DC comics, which constantly have so many different characters in play that the writer has to remind you who this person is, PRETTY DEADLY is a comic that allows the reader to pull together the threads of mystery and story that have been laid out in the previous five issues to create in the viewer a swirling reaction that is as beautiful as Rios’ art on the page. 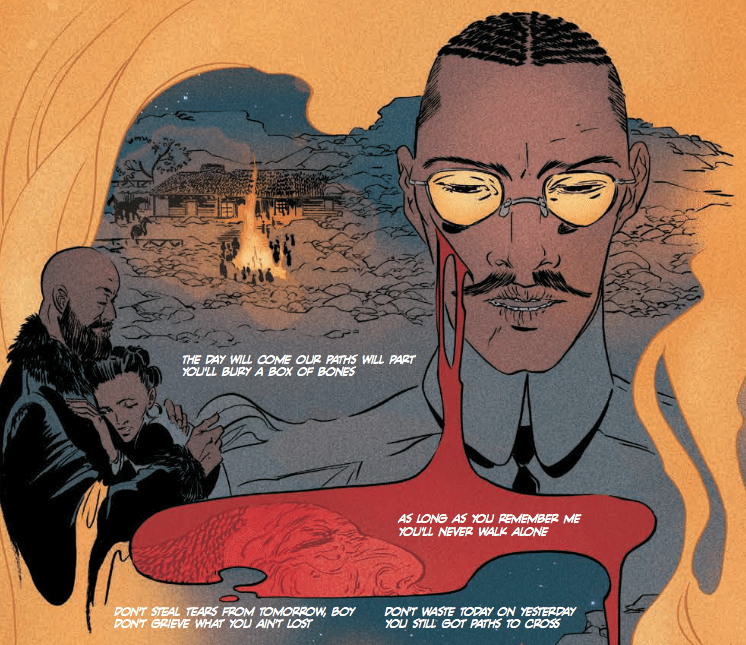 READ: Looking for something new? Check out our review of LIMBO #1!

This leads to one of my favorite moments, which is an echo from the very first issue of PRETTY DEADLY, the telling of a story. This one revolves around death, much like the first issue, but instead the story is now focused upon a young boy dealing with the loss of his mother. The art here is particularly gorgeous, and Emma Rios’ really knows how to achieve a psychedelic style, that is some ways reminds me of THE SWAMP-THING, while also integrating elements of westerns and manga.

Basically, this comic is art, and if you have an hour to kill, then you should sit with this issue. Don’t go to the MOMA or the Metropolitan Museum of Art. Trust me, this issue will be enough to satisfy your artistic side for days.