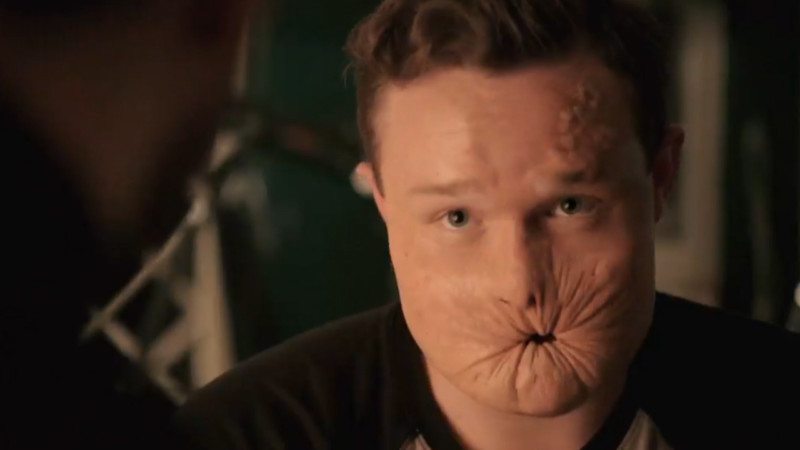 AMC’s adaptation of the comic PREACHER has done pretty well even though it hasn’t grabbed much source material. While straying away from source material, the showrunners definitely have took a few things and tweaked it into the show. One of these things are the visions of Eugene, better known as: Arseface.

In the comic, Arseface is an out-cast; an abused boy who grew up as the town sheriff’s son. He and his friend Pube worshipped Kurt Cobain like no other. Kurt not only influenced their music choice, but also their style and attitude. Their similarly-styled long hair, unmotivated lifestyle, and choice of clothing labeled them as outsiders to the town. Their obsession towards their idol turned people off. One day after being beat by his father, Eugene hears news of Cobain’s suicide and makes a pact with his friend to do the same. Pube successfully kills himself, but Eugene puts the barrel under his chin and fires, which only severely deforms his face. His deformity leads to his name Arseface after one of the characters notes his face looks like an “Arse”. He also can’t be entirely understood. When he speaks in print the comic book artists show side texts detailing what he actually said. After the whole incident everyone in the town begins to hate him, his mother runs away, and his father remains from speaking to the boy after the mother’s disappearance. Despite the drastic change from his already miserable life, Eugene takes a “glass half full” approach to life and maintains a consistent upbeat attitude throughout the comic.

The creators of the show take a slightly different approach in introducing Eugene. The differences between the comic and the show are that Eugene’s father doesn’t abuse him and he actually does speak to him. While maintaining his upbeat attitude his father still does neglect him. He does show that he cares a great deal for him, opposed to the comic where the sheriff barely glazes his eyes over him. The suicide pact also goes a bit differently. He is in love with a girl named Tracy from the town and, apparently, when she does not return his love, Eugene actually committs murder and then botches his suicide. His dialogue is also now audible. Instead of a side text detailing his sentences, he speaks with an impediment. This deviates far from the comic, but the impression Eugene leaves in the town, both in the print and show, is that everyone despises him.

READ: THE MAGNIFICENT SEVEN: PAVING THE WAY FOR POC?

In the Vertigo print of PREACHER, instead of Jesse Custer seeing visions of Eugene, he often sees visions of his role model- classic Western film actor John Wayne. He first sees him during one of the cruel punishments his grandma has for him after he swore in front of her. He is not let off the leash even though he just witnesses his best friend’s murder in front of his very eyes. He is thrown underwater into an airtight coffin that has a tube to ensure oxygen flow. With his sanity slowing slipping after being in there for days he begins to hear Wayne. Wayne talks to him and motivates him at times. We usually get to see Wayne during extremely difficult times for Jesse; Eugene shows up during similar times of distress in the show. John Wayne will come out to give Jesse a word of advice or he might just come around to rip him a new one. Either way, it was always good to see Wayne as he sometimes gives clarity to the storyline. 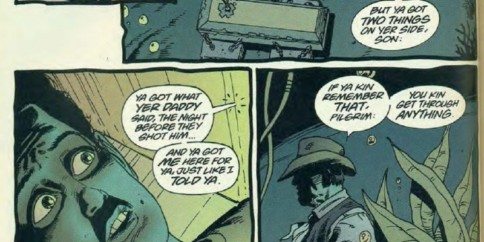 The adaptation of using Eugene as Jesse’s source of visions gives the show some leeway as to the direction it could gear towards. In the show, after becoming a bit fed up with Eugene, Jesse uses god’s word to send him to hell. He seems a bit guilty afterward but eventually it seems as if he stops caring. Towards the finale Jesse made it one of his primary goals to get Eugene back. He sees him in the church at the spot where he actually vanished. This is right before Jesse has the whole town before his alter as his back is pushed against the wall. We also get to see him in the final moments of the finale. Right before the gang hits the road we see him in a diner and he exchanges a few words with Jesse. They then jump in the car and the episode concludes.

In terms of what this will do for the show, this will probably give Eugene a bigger role. He’ll probably begin to come out at different times to speak to Jesse when he’s feeling troubled. Whenever Wayne appeared in the comic, he encouraged Jesse and gave him the incentive/motivation he needed to get by. Eugene has only been seen as a vision in a couple of scenes  so its too early to tell if he will provide the same support Wayne did in the comic. This interpretation also implies there’s going to be a couple of episodes devoted to rescuing Eugene which might end being pretty cool and unique, considering he’s currently stuck in Hell. Hopefully, we  will get to see some interesting scenes of hell where Jesse will have to descend himself to get Eugene back. While I’m not the biggest fan of this alteration, the creators and developers did such a great job with the first season and its direction that I’m sure whatever they decide to incorporate will be great. As long as they stay away from dragging the storyline in hell and getting to it in a clear manner, it will probably come out as a success. One can only hope.

With the new season coming out in mid-2017, fans can only hope this adaptation will become successful. If the cards are played right, the show will continue down its path of success and make their viewers happy. Maybe Arseface will do a better job than of what Wayne did in the comic, but unfortunately we’ll all just have to wait and see.