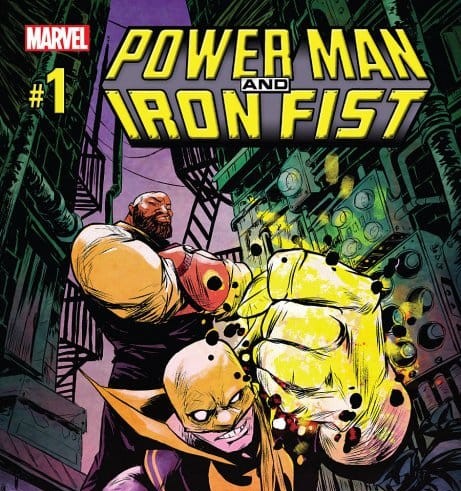 If you are looking for a sprawling space odyssey or an inter-dimensional power struggle, this comic is not for you. If its first issue is any indication, POWER MAN AND IRON FIST is going to follow its titular characters back to their roots—which means a bit of banter, some detective work, and a whole lot of street justice. It has been far too long since one-time Heroes for Hire and longtime friends, Luke Cage (Power Man) and Danny Rand (Iron Fist) have spent significant time together in print, and Marvel isn’t looking to screw it up. 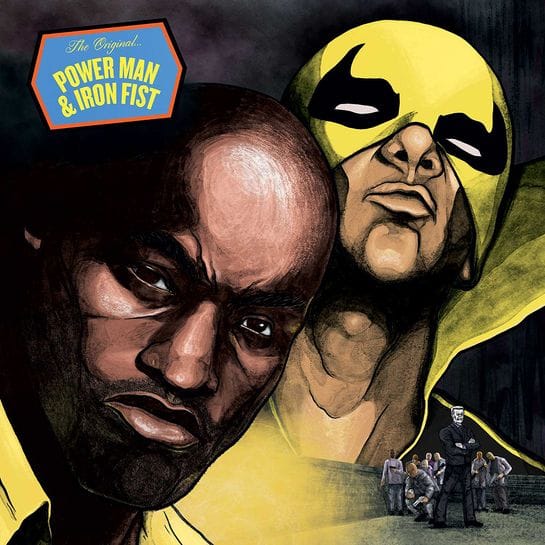 Artist Sanford Greene contributes a fresh take on the two titular characters, furthering the contrast between the two. Cage’s immense muscular bulk appears almost comical next to the wiry form of Danny Rand. The heavily stylized nature of Greene’s figures accentuates the differences among every character in the book, even providing unique physiques to each passerby. Greene’s linework cultivates an almost retro vibe, which is aided by the color palette used by colorist Lee Loughridge, stirring up memories of the original HEROES FOR HIRE comics.

READ: Like Marvel’s JESSICA JONES? Check out why we think the Netflix series is one of Marvel’s greatest creations!

Courtesy of writer David F. Walker, the first issue of POWER MAN & IRON FIST starts slowly in order to ease new readers into the iconic yet long-ignored partnership of Cage and Rand. In addition to this, Walker reacquaints older readers with their Calvin-and-Hobbes-esque dynamic, with Cage being the complicated and matured muscle contrasting with a hyperactive Rand’s non-stop talking. Walker makes it known that as of late, Cage’s role as a hero has taken a backseat to his responsibilities as a husband to Jessica Jones and father to baby Danielle. Cage even adheres to a strict “no swearing” policy instituted by Jessica after their daughter began cursing. Though it is unclear whether or not Cage has been in total retirement, one thing is clear: It’s not going to last. Despite displaying a great deal of respect for his friend’s decisions, it’s clear that Iron Fist is eager to get back into the swing of things with his old teammate. Even if he believes it’s just ‘one last team-up’ to help a friend, it’s a start.

With an IRON FIST Netflix series in the works, and LUKE CAGE coming out on Netflix later this year, it makes sense for Marvel to cultivate a fanbase prior to the release of shows whose titular characters carry little name recognition to those outside of Marvel’s devout fanbase. While one would assume that the hype generated by Cage’s inclusion in the first season of JESSICA JONES would be sufficient, Marvel doesn’t seem to want to leave anything up to chance for its second on-screen universe.

READ: Want more of David F. Walker? Check out our review of SHAFT: IMITATION OF LIFE #1!

Perhaps this is why Walker has already introduced a few characters from Cage’s past to the new series—to lay a foundation that the Netflix series can call upon. While it may be nice for longtime readers to see the reintroduction of a handful of characters from the old HEROES FOR HIRE comics, it is important to remember that for Cage, this only serves as a reminder that no matter how much he grows, he will always be haunted by the ghosts of his past.