In 2006, FAIRY TAIL was released and depicted a world where magic is ingrained into everyday life. The story follows the adventures of Lucy Heartfilia and Natsu Dragneel in the guild Fairy Tail as they perform odd jobs that you would find in a classic RPG to make a living. It was three years ago that a friend recommended it to me and I was instantly hooked on the vibrant magical world. I even liked its equal use of fanservice for all characters, not just the female ones.  Don’t get me wrong, I don’t think all fanservice is terrible but somewhere down the line, the path skewed in a way that made me uncomfortable with the way it was used. Many fans would agree that the anime/manga just wasn’t the same after the Tenrou Island arc.

I was finally able to pinpoint the source of my discomfort when I realized that fanservice directed towards the women was nothing more than gratuitous, sexualized violence. This goes beyond revealing armor or breasts defying the laws of physics and anatomy, these are female characters being exploited for their pain purely for the benefit of the male readers.  Sexualized violence is also a violation of consent.  None of the female characters have any control over their bodies anymore. In the beginning of the series, Lucy used flirting to get discounts to comedic effect and Erza was very much aware of her sex appeal and owned it. Nowadays, they’re either being stripped by the enemy while beating them half to death, or it’s the author drawing from weird angles to show their underwear. 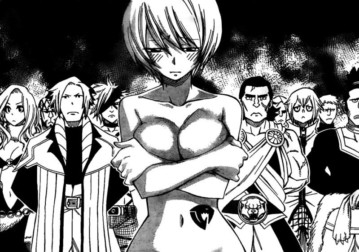 The sad part is that FAIRY TAIL used to be one of my favorite shows to watch. What began as a cute and hilarious adventure story that emphasized the importance of love and friendship slowly devolved into the author expressing his S&M desires.  The recent chapters have the women being captured and tied up so many times it might as well be 50 Shades of Harry Potter.  I suspect that Hiro is using fanservice in this strange way now to distract from the lessened quality of his work.  There is no longer a sense of suspense since everyone’s superpower is impenetrable plot armor.  But at least we get cleavage.  The only reason I still watch/read now is to see how strong Lucy gets since she’s my favorite character.  I was saddened to feel like this for a series that made me go through an entire spectrum of emotions in its glory days.  I was prepared to get my first tattoo of the guild crest–thankfully, I dodged a bullet.

Looking back, the first ominous sign was in the middle of the Grand Magic games. A character from another guild, Yukino, was soundly defeated by a rival guild and it didn’t go very well with her guild master, who demands strength and victory from his members.  His punishment for Yukino was to have her strip down and burn off her own guild crest and leave the guild.

I wasn’t critical of this scene since I believed it was done to show how twisted the guild master was. I never questioned why Yukino had to suffer, yet a male character from the same guild who also lost a fight only got a slap on the wrist.  I thought this was an isolated incident.  That is, until the Tartaros Arc, when another woman, Erza, was stripped and tortured by a demon. To add insult to injury, there was a weird frog demon with tentacles gloating while she was in pain. It should be an unspoken rule that using tentacles spells the beginning of the end for an anime (looking at you SWORD ART ONLINE).

While I was watching this unfold, I wondered how this could possibly be considered sexy? Why was it so important to emphasize her body while she is in excruciating pain? I thought maybe the author, Hiro Mashima, was being subversive and showing Erza from the point of view of the enemy, Kyoka. Maybe he wanted to put the reader in Kyoka’s mind by using fanservice to show her getting pleasure out of torturing Erza. I gave Hiro the benefit of the doubt thinking it couldn’t possibly get any worse. How wrong I was.

The Tartaros Arc was over a year ago in the manga and in that year, there were more pervasive examples of fanservice that made me cringe. I didn’t think much of it because I’d be a hypocrite if I enjoyed the male shirtless scenes, but condemned the scenes with females. It can even be empowering when a male or female character embraces their sexuality and uses it as part of their arsenal.

The final straw was in chapters 501 and 503 when Lucy was defeated and the villain had her on the floor. The comic panel focused on a crotch shot of Lucy while her head was being crushed. In chapter 503, Lucy’s eyes were seemingly gouged out but not before her clothes were burned off because we’re supposed to care about her breasts when there’s blood dripping from her eyes.  At this point, I just couldn’t stop rolling my eyes. Why is it important for her to be naked here?  My favorite character couldn’t even get one chapter of development and show off her new powers before she is once again rendered helpless. Not only that, the seriousness of her plight was taken away while the audience was subjected to cheap underwear shots rather than being worried about her. It could be because I am gay, but I sincerely wonder if male readers find that attractive?

Fanservice also crept its way into the fights themselves when an assassin’s weakness happened to be an extreme shyness towards unabashed women.  How convenient.  Lucy’s allies then decided to take her clothes off against her will in the middle of fighting him. Even if she did consent to exploiting his weakness, it will reduce a strong and intellectual fighter to the sum of her body parts.  The men are never subjected to this and they seem to follow a trend present since the DBZ days where the stronger the men get, the more tattered their clothes become. It creates this stark contrast where male exposure is used to emphasize their strength but female exposure is used to humiliate them.  I seriously wonder if Hiro sits at the drawing board, and decides that the only way to make a scene more compelling is to have a crotch shot in the middle of an action sequence.

Now that we are aware of the issues, how can they rectify this? Call me crazy, but I don’t believe readers should be looking for titillation in a female character’s suffering. Fortunately, the FAIRY TAIL anime takes steps to censor the sexualized violence.  The scene with Yukino was done with different angles so as not to expose her body and Erza was clothed during her torture scene. Unfortunately, the tentacle demon was still present in the anime, but baby steps I guess. 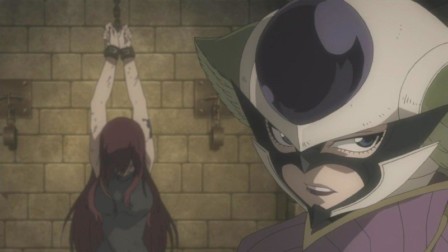 The next step would be to go back to how FAIRY TAIL was in the beginning. Male and female characters were depicted more equally by having them take back ownership of their bodies. There’s no shortage of strong women so it should stand to reason that they shouldn’t suffer such embarrassing and exploitative defeats. Less readers will be alienated if sexual violence isn’t as prominent.  Fanservice, by definition, should please all the fans, not just the very outskirts of male fans that sexualize pain.  To those who would crucify me for saying fanservice needs to be toned down, I would kindly ask them if seeing a woman’s body is important when a scene is depicting them on the brink of death, or if they would rather see a sexy, empowered woman kicking butt every chapter/episode?