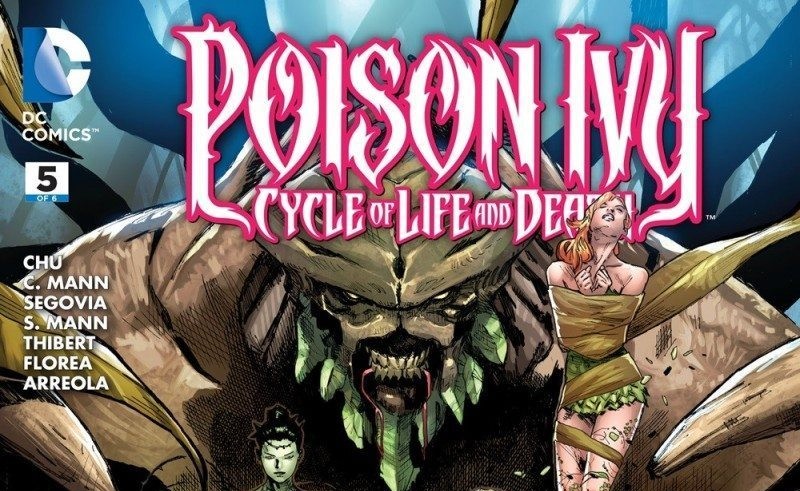 As I’ve noted in past reviews and what our own Tim O’Reilly has mentioned for the previous issue’s review, Amy Chu and her team have done some incredible things for the dimensions of Poison Ivy’s character. From filling out the more

human and maternal aspects of her character, to allowing her to have her sexual agency without being objectified, Amy Chu has thoroughly characterized both Poison Ivy and Dr. Pamela Isley.

READ: Want to check out some more indie comics? Read what Chris has to say about AIR BOY Deluxe Edition!

In prior issues, we had begun to see how the maternal elements of Dr. Isley’s character manifested, from nurturing her own pet project, to creating humanoid plant creatures like herself. In this issue, we begin to see how that maternal love translates into something more

emotional and human, instead of her usual ruthless and sterile approach. While the main story has to do with Dr. Isley’s research being stolen and her figuring out who is behind the deaths of her colleagues at Gotham Botanical Gardens, issue five also explores the themes of the cycle of life and death within the context of Dr. Isley raising her sporelings more deeply. We see the story take a surprising turn to a more domestic and relatable narrative, especially for a Gotham bombshell villainess like Poison Ivy. While there have been some cheesy permutations of female characters turning into mothers, I found Poison Ivy’s the most natural (for lack of a better pun).

LISTEN: Looking for Marvel instead of DC? We did a podcast interview with famous X-Men writer, Chris Claremont!

In the previous issue, we see that ruthless side of Dr. Isley which was revealed by her anger towards the killer of her peers and thieves of her test results. Her anger is translated into a plant-controlled, destructive rage. Not only is her anger at her experiment being stolen and used in selfish ways, but also because of the human part of her that feels compassion for the subjugation and unfair treatment of living things. This new

compassion is seen in this issue as her sporelings grow rapidly. We see that she no longer feels able to control and understand her sporelings in a purely scientific way because they have become more like human children with personalities and emotions. She expresses her own self doubt about whether she can engage emotionally and provide what her sporelings/children need as they mature and crave independence.  Readers can see all of this beautifully executed by brothers and artists, Seth and Clay Mann. With their guidance, we get a special comic focused on earthy tones and hues, with the otherworldly figures of Poison Ivy and her sporelings.  The comic’s art also keeps up with old traditions, such as the creative panel organization on one page simulating detective case file, paying proper homage to the origins of classic superhero comic storytelling under DC comics. With the help of Stephen Segovia in the expressive and realistic pencils, clean and tight line work from Sandu Florea and Art Thibert, and the beautiful array of earthy colors by Ulises Areola, the aesthetic of this comic continues to be both stimulating and traditional. 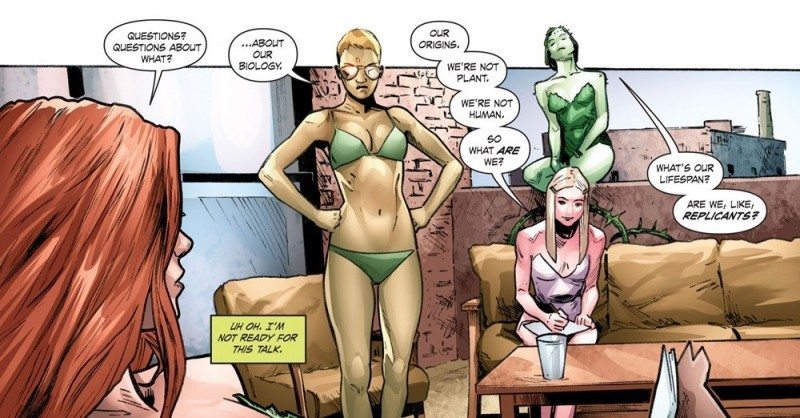 The main thing I enjoyed about this issue, however, was how thematically air-tight the story is. From the get go, we understood that the Poison Ivy series was going to deal with “The Cycle of Life

& Death”, due to the obvious natural elements, as well

as the title. While this title could have been proven to be appropriate with little effort–considering that Poison Ivy has called been called a Mother Nature figure–Amy Chu’s writing gave further depth to the themes of life, death, maternity, and legacy. Thus far, we’ve seen both destruction and creation in the more literal sense of Dr. Isley’s colleagues’ deaths or her sporelings’ birth. But we also see these themes in a more metaphoric way in her relationships to other people. In a way, one can even say that Poison Ivy’s falling out with Harley is a kind of death, as well

as Dr. Isley’s solidified friendship with gentle pacifist and admirer, Dashan, as a kind of birth.

On top of these thematic consistencies throughout the series, in issue five we see Poison Ivy’s continued

insecurity and self-consciousness regarding sincere and effective human interactions with both family and friends. Based on the previous issue, it’s easy to see how Dr. Isley could feel the most comfortable and in control as Poison Ivy, however vengeful and angry of a side of her that might be. The part of her she struggles with is the good doctor that simply wants to reenter the science community without any preconceived notions or judgments about her. In one instance, she even has difficulty talking to the green, which is what naturally links all plant life together. That feeling of being polarized by what she is–both human and plant–becomes painfully clear

in this issue. If you’re the kind of reader that likes a good, solid superhero story, but also wants solid internal struggle to go with the external, POISON IVY is the series for you. 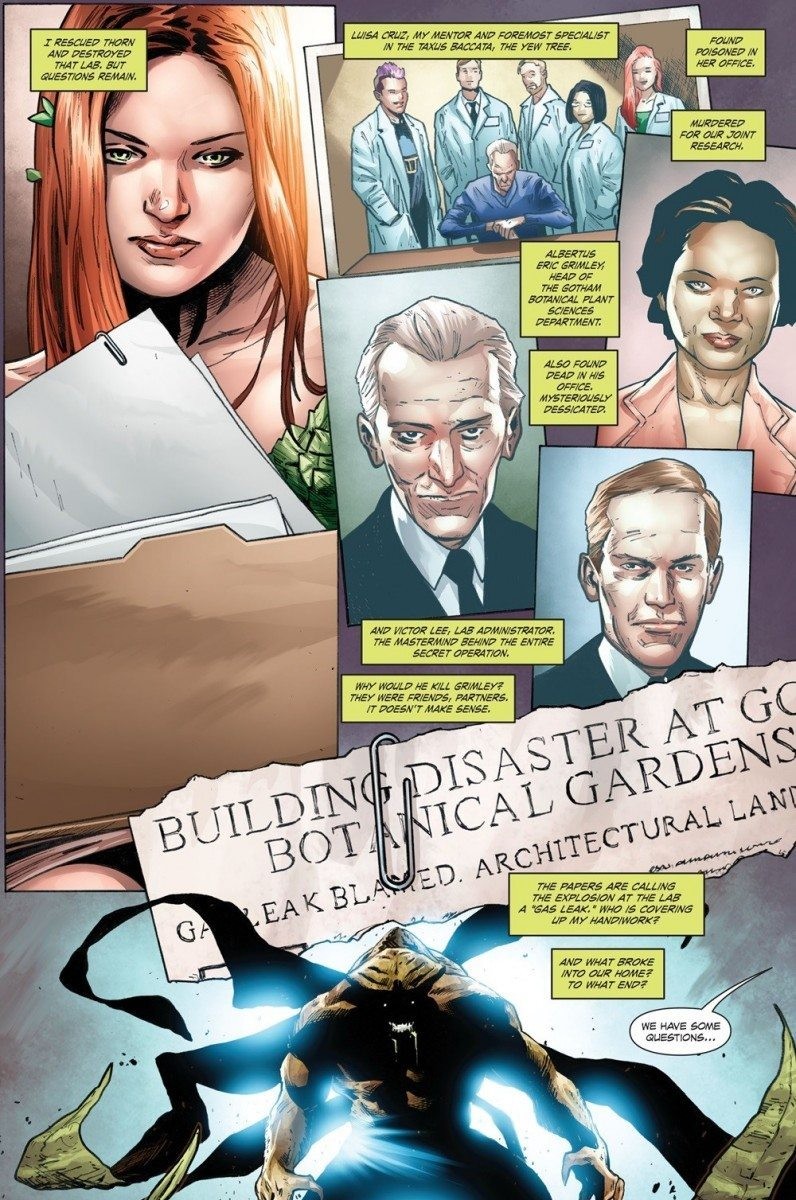 On top of a compelling and classic mystery about a scientist’s experiment results being stolen to create something monstrous, there’s another very important narrative: a story about an ex-con trying to assimilate herself back into the world, as  not just a scientist, but a plant-humanoid outsider, and a mother. In a lot of ways Poison Ivy represents the difficulty and frustration of all women

trying to make their mark on the world without becoming demonized or deified. Her sporelings/children soon prove to have the same problem in the ruthless darkness of Gotham in this scintillating issue that touches upon the pervasive idea of showing Eve–and all women–as the root of evil and subjugation.