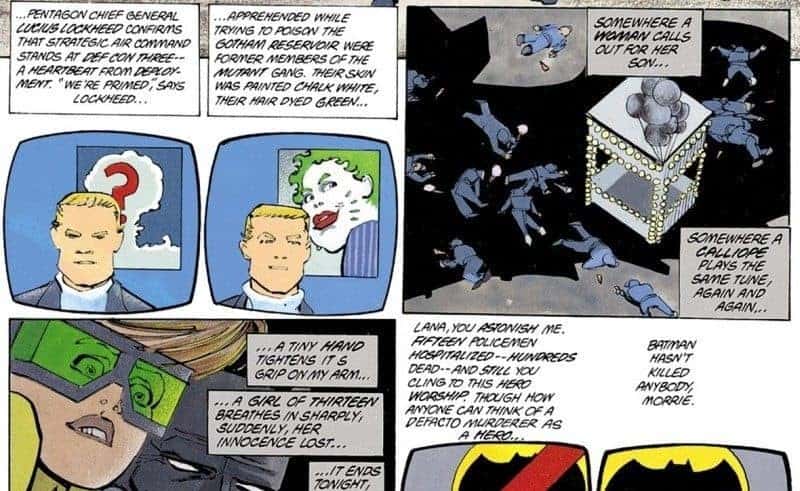 I’d need more than a couple days to puzzle out something fully coherent to say about Miller’s Dark Knight. Even something short. But I thought I’d start with my favorite page (140 in “Hunt the Dark Knight”) and move out from there. We have a half-page splash panel with five television-shaped panels—one superimposed over the bleeder and four in horizontal pairs with their own gutters, classically balanced (contrapposto-style) with two standard rectangles. The page rhetoric is pretty typical of plot-advancing pages in Dark Knight, with shifting points-of-view (low, birds-eye, close), lots of narrative, and meaningful color choices: the native sky and ground of Gotham is gray and blue-gray, and the steel-blue uniformed scouts emerge from the murky sky only to return to dust. Bright colors are foreign here, either pathogen or unsuitable: the Joker’s hair and cotton candy stand out, as do Carrie’s eyes, which stop being child’s eyes on this page. On television, Batman’s emblem is a bright yellow, but the man is as dark and dull as the sky.

One thing about DKR that’s easy to point out is its smart treatment of television as a medium for information, on display here. In terms of theme, impending disaster at Corto Maltese, or basic content, Batman and Joker, the news manages to have a relation to occurring events, but is often tragicomic for what it misses or oversimplifies. Here the broadcast covers Joker-inspired crime and theoretical discussions about Batman while the original and the real thing are about to clash over a totally newsworthy situation the press doesn’t cover until it’s too late. Television feed in Dark Knight frames the events with which it shares pages while being completely detached from them. Commenting obliquely on the comics code, broadcasters are aware of specific things they can’t say or show, but no one is forcing them to produce useful or quality programming. I have a pretty hazy concept of this history, but I suspect that the rules requiring television stations to produce a certain amount of public interest programming and provide balanced perspectives dissolved close to the time Dark Knight was written.

So the media’s watching and framing from their window/frame panels, and people are down in the bleeding mess. Again, I’ve been having a hard time pinpointing what exactly any of the characters are meant to celebrate/satirize/criticize because DKR’s creators were really careful about making the mess of living in a post- A-bomb/Watergate/after-war race riots world as complicated and frightening as possible. Although Superman and Batman, and Commisioners Gordon and Yindel are set in ideological opposition to each other, they all seem to make sense at different times, and they all get a pass when lives are in danger.

I’ve been trying to figure out what it means that major antagonists in DKR are adolescents without motivations and compulsive murderers with abnormal minds (Two-Face and Joker). In all cases, they mock attempts at being understood—the psychologists look imbecilic and then they die, Carrie’s “liberal” “parents” are too high to be people—but serious villains are almost flippantly contrasted with the petty criminals the Sons of Batman go overboard to punish. We’re not asked to think about why it’s wrong that the guy who shoplifted a couple magazines gets his hands cut off, while we are clearly meant to share in some of the pleasure Batman gets from whipping the mutant leader so brutally. These are obviously different degrees of guilt, but neither invites empathetic investigation. It’s obviously important that mutants are the traditional comic book audience, and that they’re mesmerized by television, and try on identities. Is the unexamined distinction between realistic criminality (things not unlike juvenile delinquency) and comic book villainy (things like poisoning 16(?) boy scouts with cotton candy) supposed to mirror a distinction adolescent comic readers can make automatically? Is exploring multiple identities through media (like television and comic books) more benign than trying on the most sensational ones available in the real world?