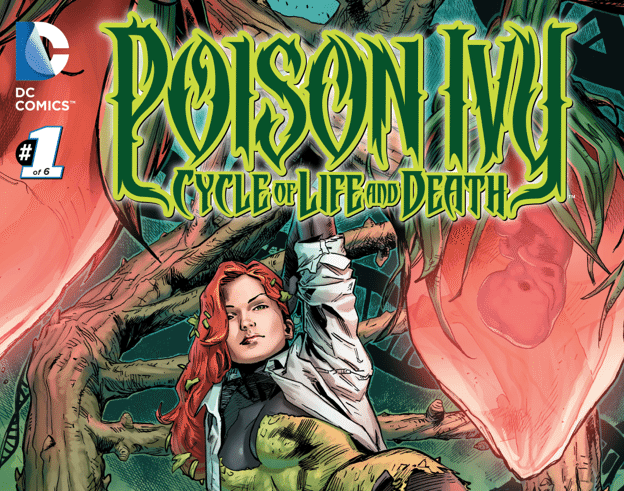 Poison Ivy is one of the most recognizable supervillains on the DC roster, up there with the likes of the Joker and Harley Quinn in the battle against Batman. While permutations of her origin story differ in how she attained her powers, Dr. Pamela Isley is one of few characters a reader can feel sincere sympathy or admiration for. Of course, it’s typical for a comic book character to have a tragic flaw that is both relatable and exciting, but Poison Ivy, in particular, succeeds in being the ideal villain: a person who believes she’s the hero of her own narrative.

That said, it’s almost despicable that a Poison Ivy mini-series hasn’t been attempted, after peers like Harley Quinn and Catwoman have long ago passed that threshold. Aside from appearances in stories like BLACK ORCHID and GOTHAM SIRENS, Poison Ivy has only ever gotten brief mentions. After the animated series and a film long ago acknowledged the character’s intrigue and memorability, it’s shocking that Amy Chu is the first writer to tackle Dr. Isley’s headlining series. For such a tall order, there is plenty of creative freedom to be expected, as well as harsh criticism from any Poison Ivy purists. 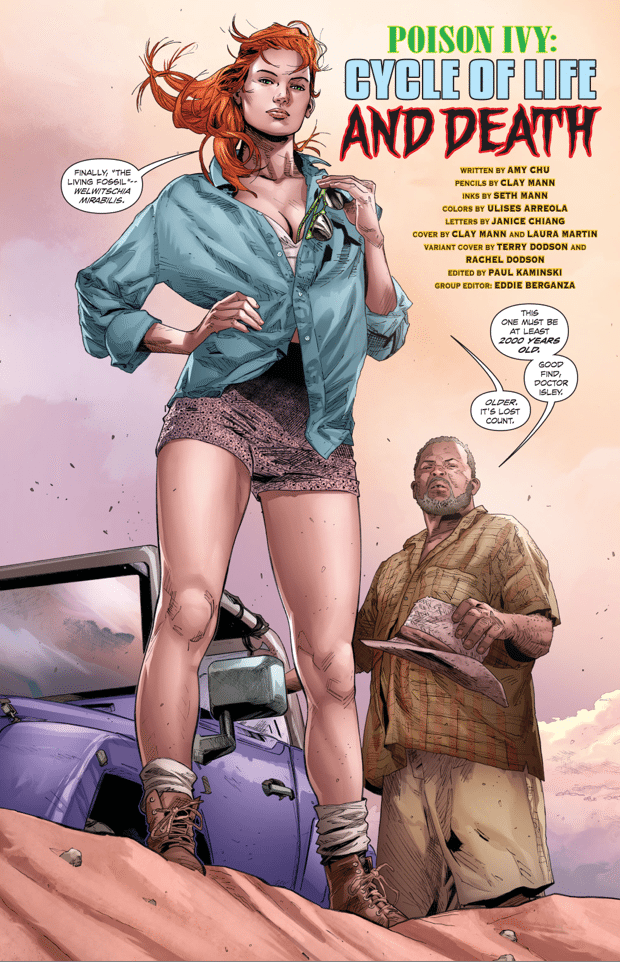 Although POISON IVY: CYCLE OF LIFE & DEATH’s first issue is not at all what I expected, I’m actually a bit relieved. It reads like a classic comic in that concise exposition and immersion is quickly achieved to prepare the readers for what the next five issues are going to be focusing on. While I expected- and admittedly maybe hoped- something a bit more horrific or dark, as Gotham narratives do tend to be, it’s nice to have the Dr. Pamela Isley side of Poison Ivy show herself.

LISTEN: If you want to check out an underrated series, listen to our NAILBITER podcast!

We all know Poison Ivy as the sexy Mother Nature figure or the eco-terrorist that represents the Green world. But strangely, it’s nice to begin her mini-series with the doctor who’s simply interested in sharing her intellect on botany and genetics with like-minded people. At the end of the day, Dr. Isley just wants to do her work and research. Playtime with Harley Quinn, as seen in this issue, is very much over. While I can see how this might disappoint some readers at first, I find it a welcomed change to see Poison Ivy’s intent become clearer than just that she’s “into plants” or that she wants plants to take over the world. In fact, she’s probably the most relatable and normal protagonist, especially when laying her comparatively to her villainess counterparts. 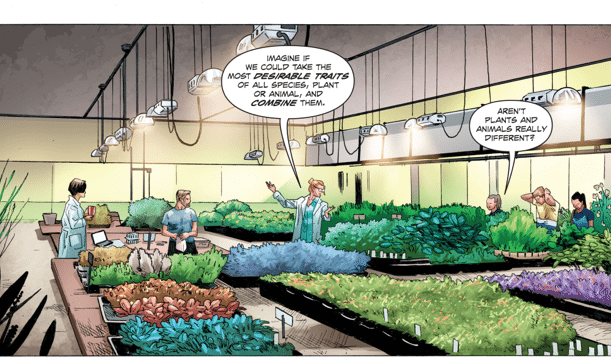 Amy Chu begins this story arc depicting Dr. Isley as a stoic, driven, and generally put-together intellectual who’s passionate about the work she’s doing at the Gotham Botanical Gardens with her mentor, Dr. Luisa Cruz. After traveling abroad to retrieve a mysterious plant she calls “a living fossil,” Dr. Isley’s powers with plant life are clear, but she mostly reserves her powers for when the plant life is in danger. Would I want to see Poison Ivy’s eco-terrorist flare up and take down some corrupt corporations? Sure. But expressing Dr. Isley’s simple desires is important. Poison Ivy, most consistently, has chosen the well-being of plant life over her own, feeling not only a relationship but a kinship with the Green, as she calls it. Several prior story lines have looked at the dichotomy of how much of her is plant and how much of her is human. I’m pleased as a reader to see that Chu is taking this idea and running with it, though it does mean alienating her from a very popular friendship with Harley Quinn. 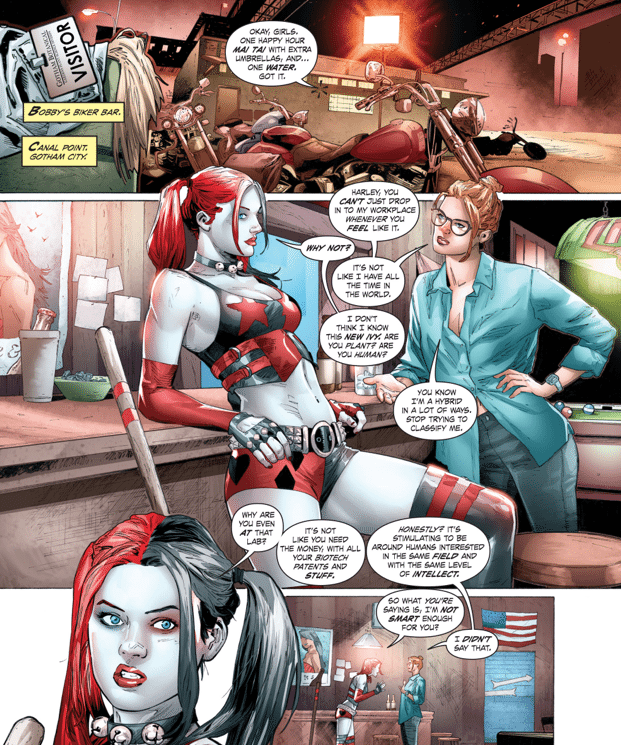 Poison Ivy has always been characterized as a bit of a misanthrope, even with her friendships with the likes of Harley Quinn. While watching Poison Ivy team up with Harley Quinn to put some sexist men in their place is enjoyable, the moment is short-lived. While the first issue can very often seem frustratingly unfulfilling in its swift introduction into a new narrative, Chu does a good job of conveying Dr. Isley’s first round of conflicts regarding her loneliness, self-identification, and commitment to plant life. It seems that Dr. Isley believes herself to be more plant than human, refusing to discuss emotions with the closest person she has to an ally. This dissonance, along with the discovery of the living fossil she found in Africa, fuels Dr. Isley’s commitment to plant science. Her sincere attempt and excitement to get a second chance in the science community is what carries this issue.

WATCH: Check out one of our own talking to the great Scott Snyder and James Tynion about BATMAN AND ROBIN ETERNAL at NYCC 2015!

Now, understandably, some may be disappointed that Dr. Isley’s not immediately seen in her green, second skin, voluptuous red hair, bringing humanity to its knees with her pheromones and vines. But, for a first issue, I’m hopeful and excited. This first issue makes a great effort in presenting Dr. Pamela Isley, not the Poison Ivy that mainstream culture has come to know and love. We see externally- beautifully drawn in hyper realism by the famous Clay Mann- a young, driven scientist with a passion for plants and genetics. However, that disconnect she experiences from humanity is very apparent when she’s home, alone with her plants. To me, this promises an inevitable transformation in Dr. Isley’s narrative, in light of her conflicts with Harley Quinn and the violent discovery at the end of this issue. I can’t help but think that Albertus Grimley, the sexist Head of the Botanical Gardens, is especially suspicious, but that’s something that I hope to find out in the next issue.

While I’m familiar with Mann’s art style from a number of X-MEN story lines, I’m especially impressed with how he portrays Dr. Isley effectively as a very human scientist, especially when pinned against someone as distinctive as Harley Quinn. While his skills are unquestionable- as are those of his brother, Seth, on inks- this first issue left me craving for more. While hyperrealism is not necessarily the first art to catch my eye, the amount of detail, skill, and cooperation required for it is always impressive.

I would be lying to say that I wasn’t itching for something catastrophic to happen, but POISON IVY: CYCLE OF LIFE & DEATH seems to be an appropriate title. Aside from the obvious association with the inevitability of birth and death in nature, we also get a glimpse of Dr. Isley getting another chance at life, a rebirth of sorts. Now, we wait for the impending death.

Together, this team presented a long-awaited mini-series in the most effective way possible: They’ve hooked us in, given us a taste, and left us pining for more. Like any dangerous liaison, expectation, frustration, and impatience are all wrapped up into one. And I can’t wait.