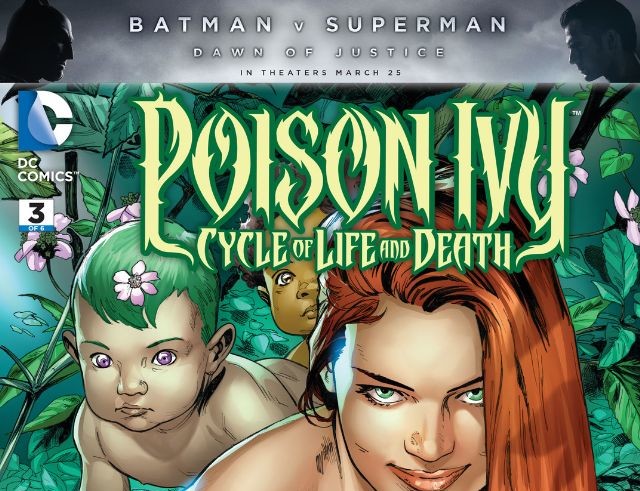 In light of the recent popularity of the Fox TV show, GOTHAM, as well as the highly anticipated BATMAN V SUPERMAN: DAWN OF JUSTICE film coming out in the next week, it’s very easy to forget other interesting characterizations in DC’s villains. Even though GOTHAM has done an interesting job of creatively acknowledging classic Batman villains, any time a character, hero or foe, doesn’t get a chance to be more thoroughly realized, it is a missed opportunity. Poison Ivy, or Dr. Pamela Isley, is one of those characters.

In comparison to both her male and female counterparts in Gotham City, Dr. Isley is oft remembered as an aloof seductress of men whose true passion lay within the plants she sympathized with. While POISON IVY: CYCLE OF LIFE & DEATH could have heavily sexualized, and in a way, simplified, Poison Ivy’s characterization, Amy Chu keeps her word in taking her in a “really new direction.” 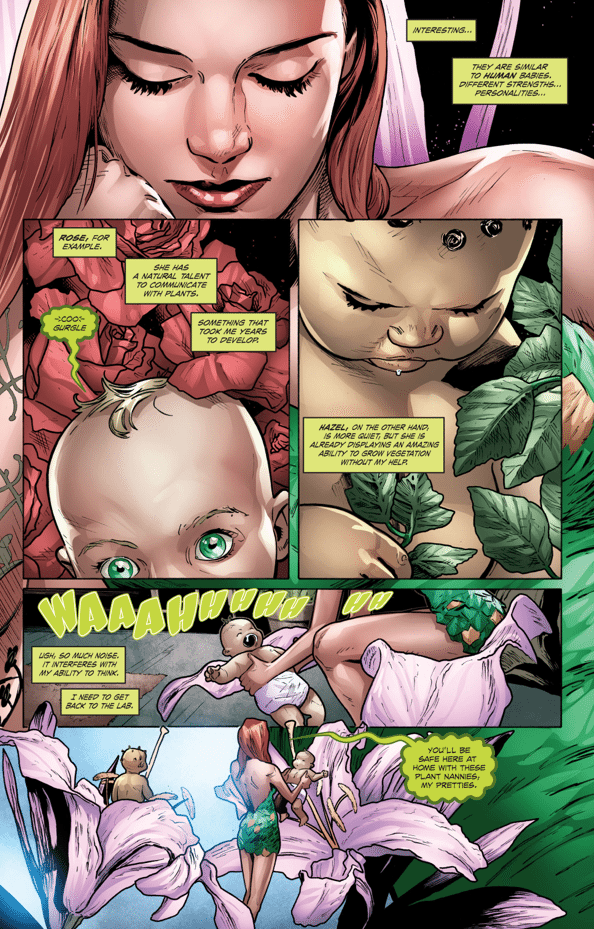 As most DC or Marvel readers can attest to, successful storytelling with old and beloved characters can prove to be challenging for even the most talented. That being said, finding a way to work with the character and representing it in a fresh way to fans both old and new is always exciting. Amy Chu takes on Poison Ivy in a new way by courting Dr. Pamela Isley’s characterization, arguably the more “human” or civilian side of Poison Ivy’s ecoterrorist rage. When I reviewed the first issue, I was excited by this new approach but was still concerned that somehow Dr. Isley wouldn’t be enough for me. After all, Poison Ivy is not a name or character to scoff at. Three issues in, I’ve been further comforted in seeing more of the venomous Poison in good Dr. Isley.

It’s clear that Dr. Isley is simply trying to “turn a new leaf” in this series and is relieved that she can engage in her scientific research in a more functional way than the ecoterrorism she is usually known for. In doing this, Amy Chu successfully creates a strong sympathy for an otherwise seemingly confident and independent woman.

In my last review, it was revealed that Dr. Isley’s relationships with her co-workers, as well as some famous villainesses from her past, are tenuous. It would appear that Dr. Isley still finds human interaction foreign or irrelevant to her when compared to her sincere interest in botanical work. That being said, the third issue proves to be a huge turning point for Dr. Isley’s story: not only have her at-home, botanical experiments borne some incredible results (even for our favorite super-villainess), but her co-workers also seem to be dropping like flies around her. Even in the wake of new life that comes from her labor of love, she has to face not only the suspicions of the police surrounding the deaths of her co-workers, but also the continued attempts from her living co-workers to engage with her. Needless to say, Dr. Isley handles one of the more persistent and stubborn co-workers in a more Poisonous fashion. Not only is this reappearance of an older and more familiar Poison Ivy exciting, but the third issue ends with another familiar face from Poison Ivy’s past.

Not only does Amy Chu effectively present the rebirth of the Poison Ivy we know to a more sophisticated and accessible Dr. Pamela Isley, but she also incorporates old and new relationships in a way that keeps Dr. Isley human. Many forget that Dr. Isley is part plant, which is just enough to make her feel separated from the rest of humanity. With her limited engagement with others, one must acknowledge a common problem among villains: Dr. Isley is lonely. In that loneliness, she finds new life and company in a constructed and familiar way: her new plants. In response to this, a new nameless foe appears.

Anyone who’s looking for the fiery redhead with a deadly kiss and the very earth at her feet, do not fear: this character is just prickly enough to be the Poison Ivy that can tear you limb from limb; Amy Chu is just doing a great job of teasing the readers. Pick up this comic and get to know the Dr. Pamela Isley underneath the sexy, Eve-like creature we’ve all come to know as Poison Ivy.

READ: More from the ComicsVerse Team!