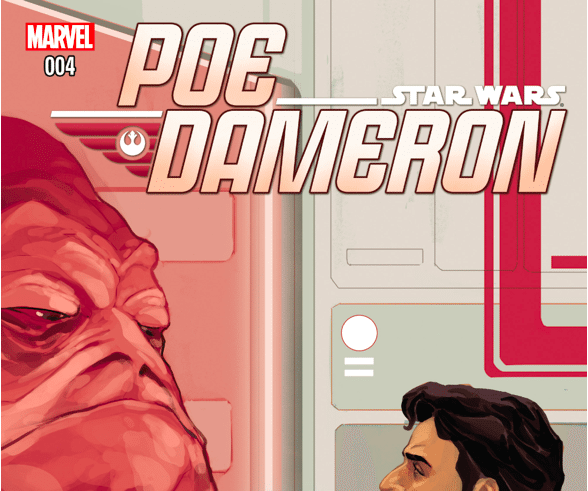 It is starting to feel like Charles Soule is the best writer the STAR WARS universe has had since Lawrence Kasdan wrote EMPIRE STRIKES BACK in 1980. His deep understanding of the characters, coupled with Phil Noto’s incredible artwork, helps make the latest issue of POE DAMERON the best yet. The characters all have a ton of personality and the panels are awesome to look at. Most importantly, this comic builds upon the lore that the Marvel series have been building for the past year and a half.

READ: Our definitive ranking of every STAR WARS comic Marvel has released so far!

Now that they’re done dealing with The First Order’s sinister Agent Terex, Black Squadron starts the issue by taking some much-needed time off. A lot is learned about each of the members as they party and drink merrily. Eventually, their hunt for Lor San Tekka takes them to the massive prison-world of Megalox. Here, they must fight to survive in order to get the info about Tekka’s location from the ever-sinister Grakkus the Hutt, who rules this ghastly planet. 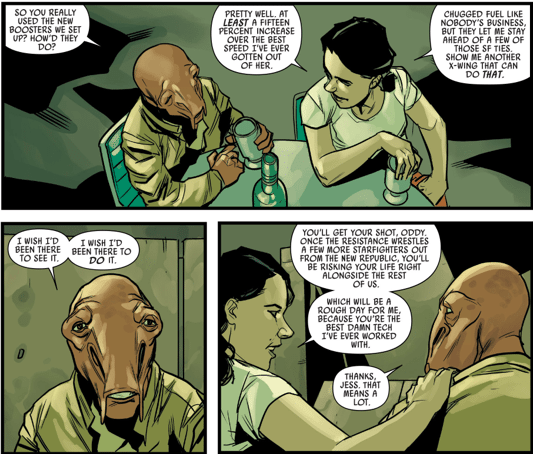 This kind of story is what makes a STAR WARS comic great. It adds backstory to an already beloved character, fleshes out new ones, and treats readers to a new part of the universe. Soule wisely chooses to spend a few panels with each member of Black Squadron, showcasing their motivations and relationships to each other. They were a rag-tag group of pilots in the first three issues, but now they feel like a family. However, there is mention that one of them could be a traitor, a sickening thought in a lot of ways. If all these characters are so great, how could any of them possibly betray the rest? Time will tell, and it offers a mysterious glimpse as to where this series could end up going.

The planet of Megalox is intriguing and unlike any other world we’ve seen so far. There have been a few prisons in this universe, but none of them feature prisoners that govern themselves. It is an interesting way for the story to go, but when Poe runs into Grakkus (last seen in the flagship STAR WARS series), this quickly becomes one of the most exciting STAR WARS books yet.

Grakkus is a terrible creature, and now Poe must appease him in order to find Lor San Tekka. Readers already know that he eventually does so in THE FORCE AWAKENS, so it will be interesting to see how this plays out. He’s up against Terex once again, and the two are competing to win Grakkus’s trust. It’s a cool dynamic, and it’s great to see that Poe has an arch-nemesis like other STAR WARS characters. Soule has expertly crafted a world for Poe and his friends, one that feels like it’s earned its own place in the canon. 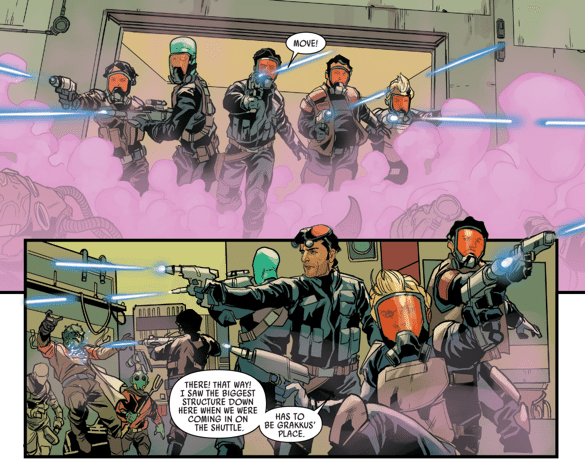 Phil Noto turns in some of his best work in this issue. The characters all have their own well-defined looks and, thanks to his talents, are extremely emotional and expressive. Megalox itself is intricate and detailed. If our characters are going to stay there for some time, he’ll really have a chance to show its ins-and-outs. The colors bring a light-heartedness to the panels that is hard to look away from. It is quite possible he’s one of the best artists to ever draw a STAR WARS book, and his style is a perfect fit for these characters.

POE DAMERON #4 takes the series back to the ground level. Whereas the last issue got a little fantastical, this one brings the characters right back into the dirt. It’s great to see a STAR WARS story about some of the “smaller” characters, and Soule and Noto don’t let that go to waste. The issue is exciting, the characters are all easily lovable, and there isn’t a wasted panel in sight. There’s never been a better time to be a STAR WARS comic fan.