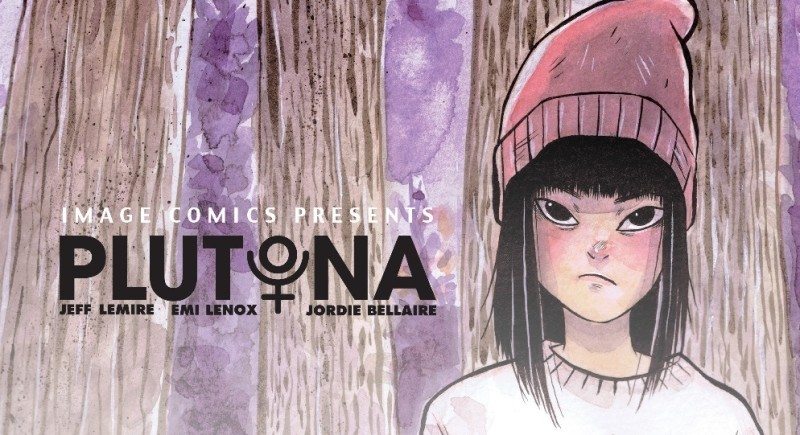 Part of what makes THE WALKING DEAD a compelling–not to mention highly successful–read is that it focuses more on human drama than it does on pure zombie shenanigans; it pulls the reader in with interesting characters and meaningful stories instead of overexposing and therefore devaluing the zombie threat. Now, in PLUTONA #1, it appears the creative team of Jeff Lemire and Emi Lenox are out to provide a similar experience in the superhero genre. Do they succeed in this feat? Let’s take a look!

PLUTONA’s characters are a group of high school misfits living in but detached from the world of superheroes. They hear about heroes on the radio, read about them in online forums, and–in the case of the boy Teddy–watch them from afar and document the sightings. It’s a grounded approach to an otherworldly concept, and it feels remarkably fresh thanks to the scripting prowess of Jeff Lemire. Each of the young protagonists has a distinct personality and background, with none of them fitting perfectly into either side of the black-white spectrum; just like real people, it’s easy to imagine any of them turning against the group or redeeming themselves after a run of questionable behavior. They’re believably human, living the grey areas that typical distinguish between real life and story book fiction. I consider this a commendable feat.

READ: A LOOK BACK AT SCOTT PILGRIM, BECAUSE ONE GOOD READ DESERVES ANOTHER!

But there ARE heroes to be had, or at least one. The series’ namesake, Plutona, bookends this debut issue with a series of surprising appearances that establish the book as murder mystery: Plutona is dead.

In a nutshell, PLUTONA’s world of superheroes capes and cowls take a backseat to a group of misfit kinds who find a dead body in the woods. One wonders if the writers are fans of Stephen King . . .

The grounded script is brought to life by the charming pencils of Emi Lenox, whose art seems to me a delightful mix of Brian Lee O’Malley (SCOTT PILGRIM, SECONDS) and Jamie Hewlett (TANK GIRL, GORILLAZ). Each character is visually distinct, each setting a somehow familiar rendering that screams of the mundane everyday normalcy that masks the world of issues our young protagonists face at home and at school. It’s like seeing the real world through a quirky filter, while a voice in the back of your mind is whispering about the strangeness that exists just beyond your peripheral vision.

The book is rounded out by a short chapter of backstory drawn by Jeff Lemire. While not as appealing as the main story, it is good to see his pencils again.

All in all, PLUTONA #1 succeeds in telling a story about humans in a world of heroes. Charming and sometimes uncomfortable, I can see fans of I KILL GIANTS feeling right at home within its pages. If that isn’t high praise, I don’t know what is.