THE KILLER INSIDE ME is a 1952 noir crime novel written by Jim Thompson. The book’s narrator and main character is Lou, a sociopathic sheriff in a small Texan town. After his brother dies in a suspicious accident, Lou schemes to get revenge on those responsible. Lou justifies murder after murder through his belief that he needs to cover his tracks. Simultaneously, Lou delights in each step from the manipulation of his victims to the final murderous act itself. IDW recently published a five-issue adaptation of the novel created by writer Devin Feraci and artist Vic Malhotra. Unfortunately, the adaptation fails to double-down on the violence that made the source material so notorious, while also failing to address what made it problematic. What remains is a crime drama plagued by mediocrity and misogyny. 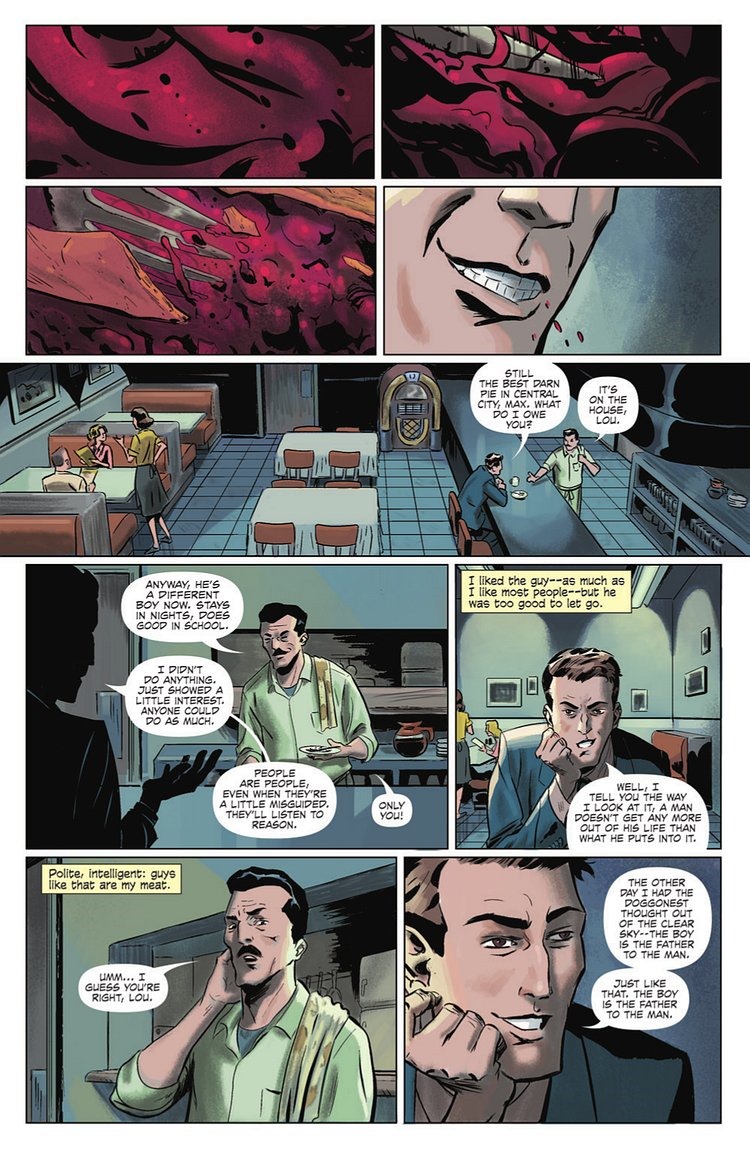 IDW’s THE KILLER INSIDE ME is not the first adaptation of the novel. The book has spawned two films, first in 1972 and most recently in 2010. The 2010 film adaption was met with mixed reviews. Although the film was stylish, it was, like the novel, abhorrently violent against women.

Given the mixed reception of the 2010 film, it’s not surprising that this latest iteration tends to shy away from explicitly violent and gory art. For example, when Lou murders a sex worker named Joyce, Lou describes how he beat her until her head caved in like a pumpkin. However, Lou’s body obscures the act from sight, with just Joyce’s fishnet-clad legs showing. Yes, we do see dead bodies and bullets fly through people. But, the creators clearly chose to visually omit the more disturbing scenes.

Ultimately, this does the comic a disservice. If THE KILLER INSIDE ME is worth remembering, it’s because it redefined what was acceptable for mainstream media to depict. The novel was shocking in its overt descriptions of sex and violence. The creators of the comic should have pushed the envelope in a similar way. THE KILLER INSIDE ME was heinous by 1950’s standards, and the comic adaptation should be appalling by 21st century standards. This would impress upon the reader what it would have been like to read this shocking crime novel in the 50s.

By visually shying away from the sex and violence, the comic, which is mostly dialogue, comes across as more melodramatic than anything else. IDW’s adaption of THE KILLER INSIDE ME is not particularly shocking for seasoned horror and true crime fans such as myself. It is, however, still uncomfortably misogynistic.

READ: Looking for a less cringe-worthy crime thriller? SPENCER AND LOCKE #1 might be right up your alley!

The Women of THE KILLER INSIDE ME Apparently Love Abuse

Up until their deaths, Joyce and Lou’s longtime girlfriend, Amy, are complicit in their abuse. Lou is sexually violent towards both women without their express consent. And we’re lead to believe that they enjoy this. Despite their differences, both Joyce and Amy desire to be dominated by a man. Even as Amy begins to suspect Lou of being a murderer, she continues to dote on him. There’s an implication that Lou’s violence is so sexually fulfilling that both women are blindly smitten by him.

There is an element of the male gaze at play in Amy and Joyce’s depictions. For example, during her murder, Joyce’s legs are in full view even as the art omits the gorier parts of her. Even as she lies dying, she is still a sexual object to both Lou and the reader. The creators never depict Amy or Joyce as convincing complex characters. They are only simple pawns for Lou to manipulate and ultimately discard. Although Lou as a character is inherently misogynistic, it was not by any means necessary to continually objectify Joyce and Amy through the comic’s visuals. Instead, the male creators of THE KILLER INSIDE ME unapologetically perpetuate misogyny through the art while delivering an unnecessarily positive characterization of Lou. 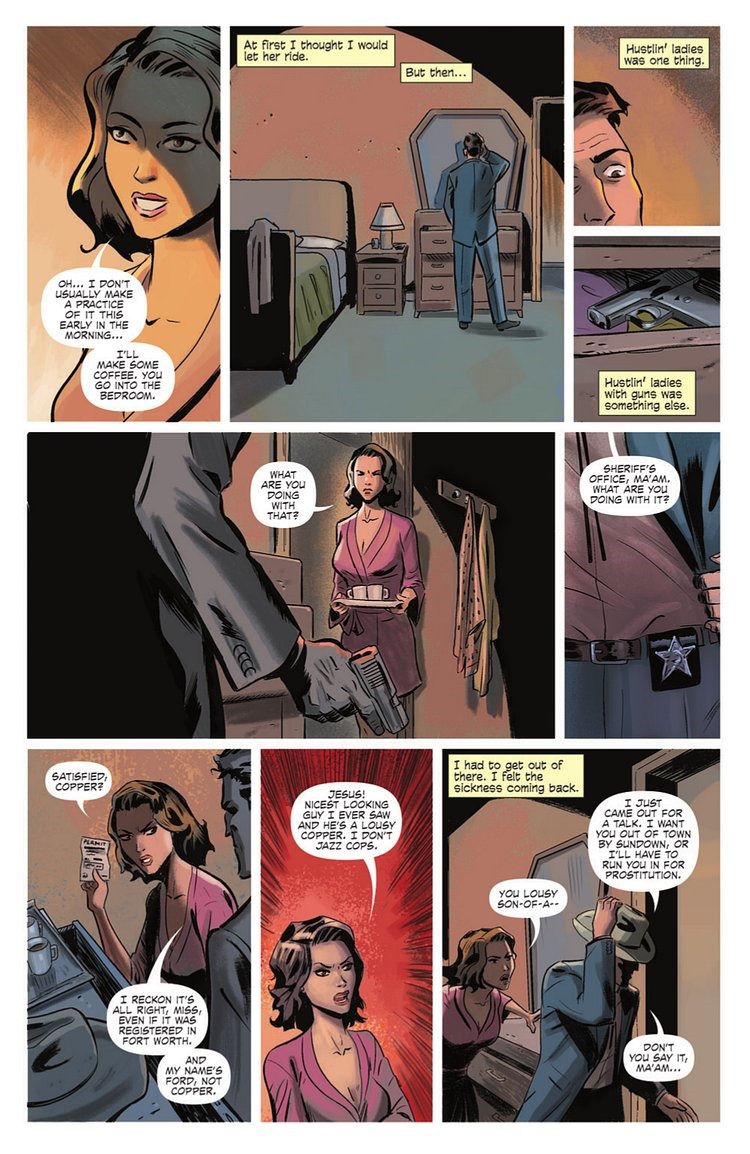 In THE KILLER INSIDE ME, A Serial Killer is Accidentally the Ultimate Alpha-Male

In a lot of ways, Lou embodies the “machismo” ideal of what a man should be. He is charming, clever, and noble in his desire to avenge his brother’s murder. He is sexually desirable, dating the innocent Amy, while also having sex with Joyce. The account of Lou’s sexual abuse at the hands of his housekeeper implies that the reader shouldn’t hold him responsible for the monster he’s become. Or at least that’s what Lou, who narrates the entire comic, wants us to believe.

The comic’s visual nature gives the creators a chance to rewrite the story. Lou, a narcissist, thinks that his charm and wit make for the perfect cover for his sadism. The creators of IDW’s THE KILLER INSIDE ME could have used the dialogue and visuals to erode Lou’s perception of himself. Maybe Lou isn’t nearly as attractive and charming as he thinks he is. Maybe Amy and Joyce both gained something tangible from their relationship with Lou, and their tolerance of his violence didn’t come from a place of love but a place of survival.

Unfortunately, the art and dialogue reinforce Lou’s version of events at every turn. The comic book falls short in its inability to use the dialogue and art to subvert Lou’s narcissism. First of all, doing this would have created a more convincing story. More importantly, it would have undermined Lou’s characterization as an “alpha-male” destined to physically, intellectually, and sexually dominate the people around him.

IDW’s THE KILLER INSIDE ME Treads an Ineffective Middle Road

IDW’s adaption of THE KILLER INSIDE ME could have successfully taken one of two diverging paths. First, it could have unapologetically embraced the violence of the novel, using its visuals to shock readers. Juxtaposed with explicit sexual imagery, the reader could fully grasp the twisted pleasure Lou takes in inflicting violence and manipulating those around him. Contrastingly, the creators could have shied away from the sex and violence and used the visuals to subvert the vision of himself that Lou is so desperately trying to project. Doing this would demasculinize Lou, allowing the readers to see him as the pathetic man he truly is. Unfortunately, the comic book adaption does neither.

Because it fails to either double-down on or subvert the horrors of its source material, IDW’s THE KILLER INSIDE ME falls short as an adaptation. It fails to capture the lecherousness of the original novel given its conservative cultural context. Yet, it somehow also fails to present an updated, more thoughtful, less outrightly misogynistic version of its source material. It’s time to put THE KILLER INSIDE ME to rest. Or, if it is destined to be endlessly resurrected, it’s time to at least include women on the creative team.