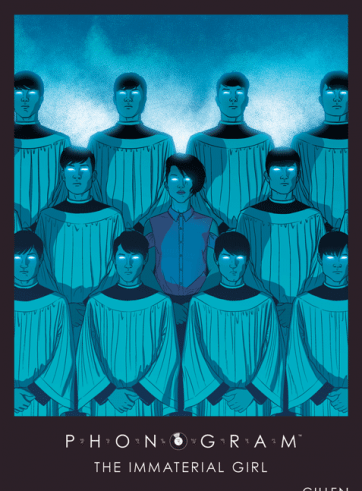 We’re halfway through PHONOGRAM: THE IMMATERIAL GIRL and we see Emily Aster going up against Claire, competing over who has the right to their past. It sounds crazy, it is crazy, but it’s brilliant.

In this issue, Claire decides to destroy all of the things that Emily has ever made for herself. As this happens, we get small looks into the past of the girl that was both Claire and Emily. Emily is still stuck in music videos, but she discovers the music is time travel, not just magic. She uses this knowledge to jump around to different musical time periods, ending up in her bedroom when she was nine by going through Blondie’s Parallel Lines. She realizes that the choices she can make will effect not only herself but everyone in the coven.

In this issue’s B-Side, David Kohl can’t seem to speak to this girl at the bar. So, he does what any sensible person would do and becomes a My Chemical Romance Monster.

The B-Sides in PHONOGRAM have been amazing almost every issue, and this month keeps that tradition alive. Dave Kohl is a character that many people prefer in small doses, so having him appear in under ten pages felt nice and not too overwhelming. In other issues, the B-Sides have been a nice break from the actual story, and this issue is no different, however this B-Side felt like it should’ve been included in a longer story. And, I mean, musical b-sides are designed for that purpose.

McKelvie is a fantastic artist. No argument. But for this issue he did something special. He doesn’t just illustrate. He focuses on layout and, since most of the issue takes place in Emily’s own weird music time stream, he uses sketch imagery and shows her jumping through her own past– via album covers and snapshots of her life. It is weirdly satisfying to watch someone go back through their life in that way and look at all the strange things that they’ve done or have been interested in.

So, yes, PHONOGRAM is insane, but it’s a good insane. It’s an interesting exploration of teenage life, pop culture and the past that is well written and beautifully illustrated.

I really, really enjoy how this story is formatted and written. It feels very real and it takes an interesting concept and brings it to life.

There are only six issues as it is a mini-series, but there are two prior collections out there, so go pick them up before you dive into this one!