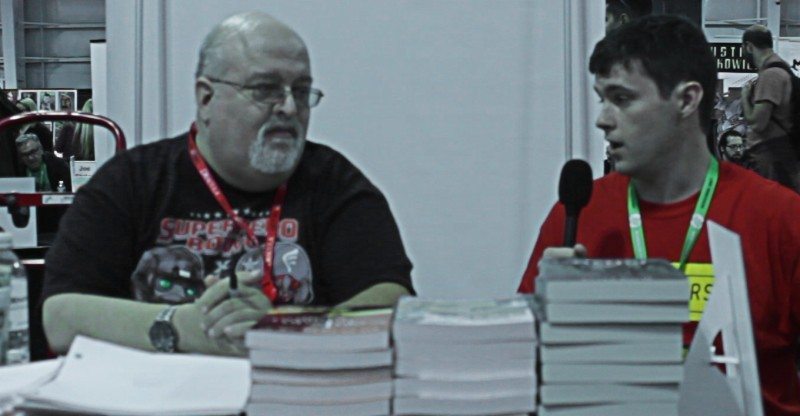 At NYCC 2015, I had a great time in this Peter David interview. Peter Davis is the current writer of SPIDER-MAN 2099 at Marvel Comics. During this Peter David interview, we spoke about Miguel O’Hara’s position in the Marvel Universe in the aftermath of Secret Wars. Readers get to look forward to seeing O’Hara interacting directly with Peter Parker in the upcoming run as an employee of Parker Industries.

From there, we discussed another 90’s Marvel creation by Peter David, Maestro. While not confirming or denying his return to the character, Peter David’s lengthy and legendary run on HULK excited me at the slightest possibility. Next, I asked about X-FACTOR. X-FACTOR remains a personal favorite of mine in addition to another lengthy Peter David run. This run lasted almost a decade long. Peter comments on the sales of the comic as the reason. However, it remains a series he takes pride in and will continue to in the future. When prompted, he also commented that there is a possibility of storylines in All-New X-Factor being touched upon in the newest run of Spider-Man 2099.

LISTEN: We discuss Peter David’s amazing work on AMAZING SPIDER-MAN: THE DEATH OF JEAN DEWOLFF on our podcast here!

My following question dealt with Peter David’s run on SUPERGIRL with artist Gary Frank. With the storyline reprinted in a new trade paperback, I wondered if the new Supergirl television show derived from his work. David responded with claims that he knew as little about the show then I did. He also said he looked forward to watching it. Finally, my last question dealt with Peter David’s latest novel, Halo: Hunter’s in the Dark. When asked if the novel had any correlation with Halo 5, David said we would be introduced to a pivotal character of the game within the novel. Stay Tuned for more ComicsVerse interviews!

If you enjoyed watching this video and my write-up! Please leave a comment, come to think of it, if you hated this interview, leave a comment too! I love a good discussion.